The Bold And The Beautiful News: Katrina Bowden’s Bucket List Accomplishment – Jumping Out Of An Airplane 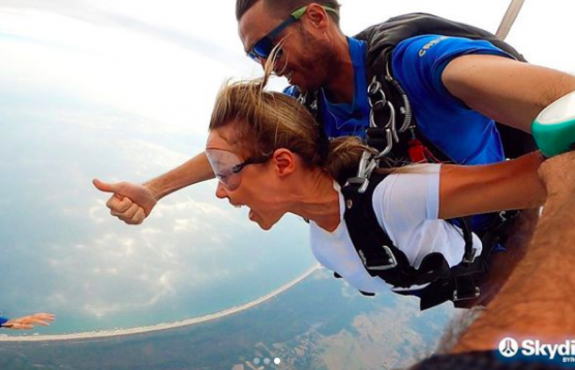 The Bold and the Beautiful actress Katrina Bowden, who portrays Flo Fulton, was able to check one item off of her bucket list. It’s jumping out of an airplane. Not only did she do the deed, but she accomplished it while coping with a fear of heights. Get the details about the victory and how she sparked fear in her husband.

B&B news indicates that Bowden has a phobia that many people can relate to. She is afraid of heights. Although dealing with fears can be overwhelming, the actress is determined to get through it. She certainly accomplished that goal while filming a movie in Australia.

The Bold and the Beautiful Comings and Goings: Bill Spencer Is Without His Right-Hand Man – Aaron D. Spears Exits

In the latest issue of Soap Opera Digest, Bowden explains that one of the movie stuntmen is an avid skydiver. After talking about the extreme sport, the actress asked if he would take her. Not only did he agree, but they roped a third person to join them, another actor on set.

Although Bowden was terrified, she did jump out of an airplane and can cross that item off of her bucket list. She also actively faced her fear and survived.

The B&B actress explained that while she was scared, it was one of the most incredible experiences of her life. Perhaps it will also allow her to really get over her fear of heights now that she’s faced it head-on.

“It was really scary, but it was the most amazing experience I think I’ve ever had… I survived, and it was the best thing ever.”

The Bold and the Beautiful News: Spousal Fears

While Katrina was jumping out of an airplane in Australia, her husband was halfway around the world. He did a similar feat when he was about 18, but because he wasn’t there with her, Ben was worried.

Of course, Katrina logically stated that even if he was there and something went wrong, there wouldn’t be a whole lot he could do about it. Despite his concerns, the soap actress went through with the act, fought her fear and actually enjoyed the experience.