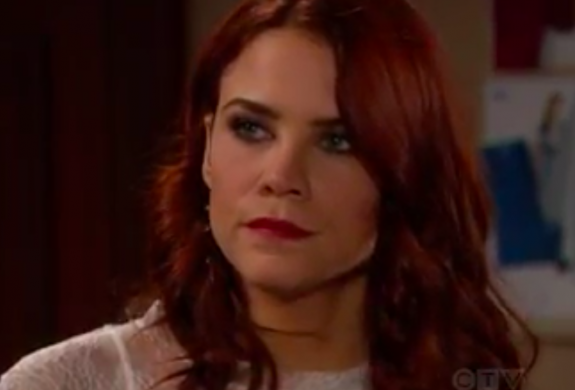 The Bold and the Beautiful spoilers for Tuesday, January 21, tease that Thomas Forrester (Matthew Atkinson) will find himself exactly where he wants to be. As B&B viewers know, Thomas recently set up a situation with the help of his sister Steffy Forrester (Jacqueline MacInnes Wood) in which Hope Logan (Annika Noelle) caught Steffy and Liam Spencer (Scott Clifton) kissing.

Of course, Thomas was banking on Hope getting upset and ending her relationship with Liam, which is exactly what she did. Well, on Tuesday’s episode of B&B, Thomas will be thrilled when Hope lets him comfort her over her breakup with Liam. We’ll see how that comes about, but somehow Thomas and Hope will wind up together, and the topic of the breakup will come up, which will allow Thomas to offer his support.

The Bold And The Beautiful News: Katrina Bowden’s Bucket List Accomplishment – Jumping Out Of An Airplane

As B&B viewers know, this is exactly what Thomas was hoping for. He has been trying for weeks to get Hope to see that Liam isn’t the man for her, and that he belongs with Steffy. Well, it seems that he has managed to manipulate Hope into breaking up with Liam, and he’ll likely keep working to get Hope to realize that he’s devoted to her.

Thomas has stated before that he wants his relationship with Hope to develop “organically” – at least from Hope’s perspective, and it seems that he’s well on his way to doing just that. It looks like it’s going to start with Hope offering his friendship as Hope reels from her split with Liam, and Thomas will hope that their relationship blossoms from there.

Meanwhile, on Tuesday’s new episode of the Bold and the Beautiful, Sally Spectra (Courtney Hope) will take decisive action. As B&B viewers know, Wyatt Spencer (Darin Brooks) just tried to break off his engagement with Sally, but Sally wasn’t having it. Wyatt even explained that he is still in love with Flo Fulton (Katrina Bowden) and that he wants to try to make things work with her, but Sally just couldn’t accept it.

Well, on Tuesday’s episode, Sally will make a beeline for Flo’s apartment, where she’ll confront her about the whole episode. B&B spoilers say that Sally will go to see Flo with the intention of setting the record straight concerning her relationship with Wyatt. We’ll see exactly what that means, but we suspect it means that Sally will say that she’s not just going to let Wyatt go without a fight.

Of course, it makes sense that Sally is holding on for dear life here. As B&B viewers know, she’s currently facing a possible termination from Forester Creations, and she’s been dealing with the onset of some serious physical symptoms that she doesn’t understand. She just doesn’t want to lose everything, so she’s going to fight for Wyatt.

It will be interesting to see how Flo responds to all of this. Of course, Flo just might point out that the decision is actually Wyatt’s. Flo might just refuse to fight with Sally over the whole thing, arguing that Wyatt is a grown man and can make his own decisions.