The Young and the Restless Spoilers: Tuesday, January 21 – Victoria Tells Billy To Get Help Or Else – Nikki Plans A Big Celebration – Faith Leaves Boarding School 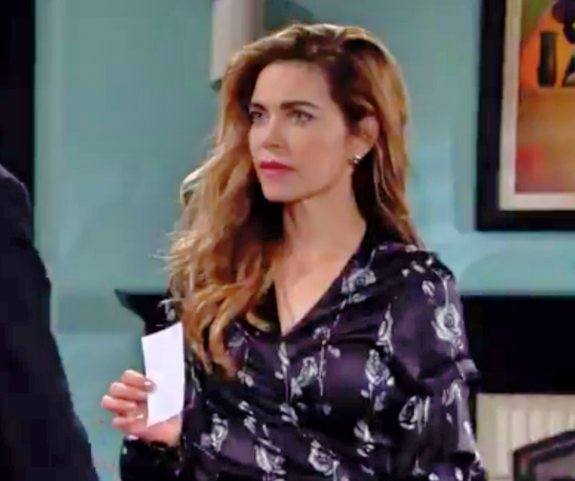 The Young and the Restless (Y&R) spoilers for Tuesday, January 21, tease that Rey Rosales (Jordi Vilasuso) will arrive with croissants at Sharon Newman’s (Sharon Case) place. Sharon will be feeling like everything seems to be revolving around her cancer, and she’ll be uncomfortable with Faith Newman (Alyvia Alyn Lind) leaving boarding school because of it. Before he leaves for work, Rey will assure her that they all want to be near to support her.

Meanwhile, at Nick Newman’s (Joshua Morrow) place, Faith will learn that she’ll be able to return to school there in Genoa City. She’ll want to get her belongings from boarding school – they’ll agree that Mariah Copeland (Camryn Grimes) will take her and they’ll make a girls’ trip out of it.

Next on Y&R, Nate Hastings (Sean Dominic) will discuss the New Hope clinic idea with Elena Dawson (Brytni Sarpy). Nate will like Elena’s idea for a mobile medical unit until the clinic is fully functional. Amanda Sinclair (Mishael Morgan) will arrive on the scene, and Elena will invite her to sit with them. They’ll discuss the New Hope project, and after a while, Elena will leave.

Amanda will then quiz Nate on how he’s related to Devon Hamilton (Bryton James), and on the nature of his relationship with Elena. Nate will note that he and Elena are simply colleagues. Amanda will squirm as Nate explains that anyone with a moral code wouldn’t cross that line.

Young And The Restless Spoilers: Nikki Newman Makes Preparations For A Big Celebration

Next on Y&R, Nikki Newman (Melody Thomas Scott) and Victor Newman (Eric Braeden) will talk at the Newman ranch. Nikki will have just sent out invitations for a celebration commemorating the 50th Anniversary of Newman Enterprises. Later, Nick and Mariah will arrive and let them know that Faith will be returning to school in Genoa City. Nikki will offer to take Faith to boarding school to get her things, but Mariah will say they’re planning a girls’ trip.

Next on Y&R, Billy Abbott (Jason Thompson) will try to talk with Victoria Newman (Amelia Heinle) about their problems, but she’ll give him the cold shoulder, saying she has to work. He’ll press the issue, and she’ll angrily relent to talk. She’ll bash him for the hurt he’s caused by confiding in Amanda, and she’ll demand that he return to therapy to get back on track.

Billy will insist that he’s not off track and he’ll want the chance to prove it to her, but she won’t have it, which will prompt Billy to accuse her of just wanting things her own way. He’ll just want some acceptance from her, but she’ll say that if he doesn’t get help for his problems, then she can guarantee that they won’t make it.

Next on Y&R, at Sharon’s house, Faith will tell her mom that she’s sorry that she was’t there when she was getting sick. Sharon will reassure her that she was living her life, which was the right thing to do. Later, Nick and Mariah will arrive, and the girls will leave for their trip to boarding school.

Once alone, Nick and Sharon will talk about Faith and how she’s handling Sharon’s diagnosis. Sharon will note that she can’t control any of this, but Nick will say that she’s tough and that they’ll help her through this. Sharon will open a box that Faith left for her before she left – it’s a necklace. Sharon will be touched and will remark that she has everything she needs right now.

‘The Young and the Restless’ Spoilers: Phyllis Seeking A Chance While Abby Recognizes Her New Enemy https://t.co/zsxNuPl2ew pic.twitter.com/xsoJwwbVC8

Young And The Restless Spoilers: Rey Rosales Gets Some Advice From Elena Dawson

Meanwhile, at Society, Elena and Rey will talk while waiting for their takeout orders. He’ll ask a couple of questions about cancer, and he’ll say that someone he knows was recently diagnosed. Elena will tout the benefits of optimism and having a good support system – and she’ll note that a person is much more than his or her diagnosis.

Finally, on Tuesday’s new episode of Y&R, Victor will tell Nikki that Mariah and Faith made it to the airport. Nikki will be happy that Nick will have Faith home for the time being, and she’ll say that she had wanted the year to get off to a good start for their children. Victor will note that something is going on with Victoria, and that he knows that Billy will end up hurting her.