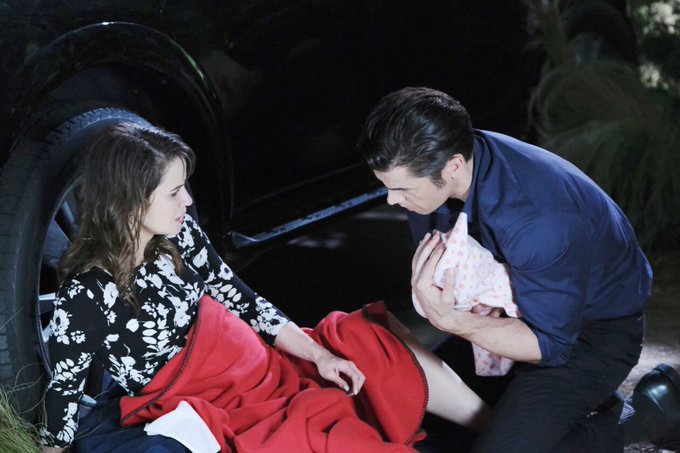 Days of Our Lives spoilers tease that Sarah Horton (Linsey Godfrey) and Kristen DiMera (Stacy Haiduk) will go into labor the same day, Mother’s Day, ironically, with disastrous results, in an upcoming episode of Days of Our Lives!

DOOL Spoilers: Sarah Horton Goes Into Labor At Home And Is Driven By Adrienne Kiriakis

Sarah goes into labor at home in the Kiriakis mansion. Perhaps it’s not her due date, and she is surprised by labor pains that she probably thinks are Braxton-Hicks contractions, which are false labor pains that usually come before the real thing, sometimes as much as two weeks prior. They are usually irregular but Sarah realizes that these are evenly spaced. She may even examine her own cervix with a finger and realize she’s starting to dilate, so she has to get to the hospital! For some reason, no one is home except herself and Adrienne Kiriakis (Judi Evans) and Adrienne doesn’t want Sarah to possibly give birth by herself, so she decides to drive her to the hospital; it’s nighttime but as a reporter she’s done plenty of nighttime driving going to cover stories and so they hit the road. But the night ends disastrously; they wind up in a wreck, Adrienne goes into the windshield and and is unconscious, and Sarah cannot rouse her! Sarah, as a doctor, knows that Adrienne is seriously injured with a likely head injury and brain trauma, and in the meanwhile, her labor pains are closer and closer! Xander Kiriakis, (Paul Telfer) who she likely called after calling the hospital to let them know she was in labor and on the way, finds the car wrecked and delivers her baby in the car!

However, he also finds another car with Maggie Kiriakis (Suzanne Rogers) passed out and a bottle of booze before he gets to Adrienne’s car and calls Victor (John Aniston) about it! Will Horton (Chandler Massey) who was also involved in the wreck, gets out and finds the two women in their precarious situation and he is likely the one who calls 911, and the ambulance arrives with JJ Deveraux (Casey Moss) on duty. He will blame himself for the wreck because he took his eyes off the road for a split second and looked down at his phone! Adrienne dies from her injuries!

Brady Black (Eric Martsolf) brings Kristen with him when he goes over to his parents’ home for Mother’s Day. Kristen is VERY pregnant and although Marlena Evans (Deidre Hall) isn’t wild about Brady bringing Kristen along, John Black (Drake Hogestyn) tolerates her although he probably isn’t wild about it either. Eric Brady (Greg Vaughan) shows up with Holly Jonas (Scarlett and Harlow Mallory) in tow and gets upset seeing Kristen, and when Brady takes him outside to talk, Kristen’s water breaks! Marlena isn’t totally heartless and will assist Kristen as she is able while John hollers at Brady that they need to get to the hospital, and they do. Kristen gets checked into a maternity ward and a hospital room and gives birth, but there’s an unforeseen complication; the baby’s umbilical cord is wrapped around her neck, and Brady tells Kristen to PUSH!

The baby is born, and seems to be okay, but then after Brady and Kristen get a few minutes with their newborn, she’s taken off to be checked out and put in the newborn nursery so Mom can get some rest. Disaster strikes when Nurse Haley Chen (Thia Megia) comes back and tells Brady and Kristen the doctor needs to speak with them – giving them the devastating news that the baby died at some point when they took her back! Kristen goes absolutely berserk! She runs from the hospital room, shoves Haley out of her way and then is shocked to realize she’s pushed her down a flight of stairs, and now not only is her baby dead, so is Haley!

The ambulance transports Sarah, the baby and Adrienne to Salem University Hospital. Justin Kiriakis (Wally Kurth) is called as is Sonny Kiriakis (Freddie Smith) and in the meantime Victor and Xander arrive. Shortly after Sarah’s baby is born, it dies. Victor tells Xander to swap Kristen and Brady’s live baby with Sarah’s dead one, and in the meantime Dr. Kayla Brady, then Johnson, (Mary Beth Evans) tells Justin they did all they could for Adrienne but she is likely brain dead, since her other organs will be removed and donated. Abigail DiMera (Kate Mansi) is at the hospital too, likely visiting her mother who is still in a coma, and finds Haley’s body at the bottom of the stairs and gives the news to JJ, who is devastated. To cover up for Maggie’s drinking and driving, which seems evident that it was the cause of both Adrienne’s and Will’s accidents, they already have removed Maggie’s car and Maggie and gotten her home, and frame Will for the accident once they find out he is blaming himself anyway because no one remembered seeing a third car!