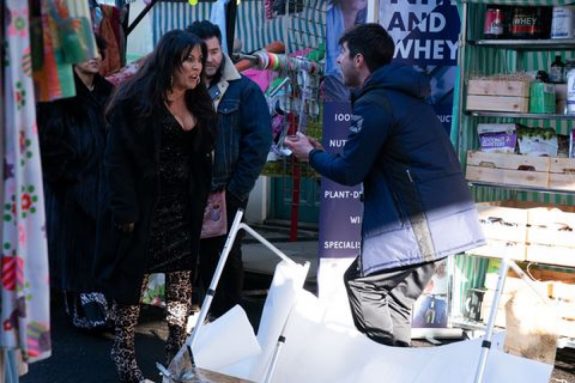 “EastEnders” spoilers reveal that Leo King (Kat Moon) will once again go head to head with Kat Moon (Jessie Wallace). Upcoming scenes next week show that he’ll deliberately rile up Kat but the latter won’t hold back as she gives him a piece of her mind. The show is setting a huge storyline for Leo and it all starts next week as things go out of hand for the town’s new villain.

Viewers may recall that Leo has caused a lot of problems for Whitney Dean (Shona McGarty) ever since he arrived in town. He’s been trying to get closer to her once more but the residents of Walford especially Kat is making it difficult for him.

EastEnders Spoilers: Are Ben and Callum Victims of The Fatal Boat Trip?

Leo is relentless. He’s been following Whitney ever since his true identity was revealed. He’s made things worse for Whitney when he showed up as the new market stallholder, and his stall was really close to Whitney’s.

Kat helped Whitney get out of the sticky situation by swapping jobs with her. However, Leo did everything he can to destroy Kat’s cleaning business. Not long after that, Whitney had no other choice but to return to the stall.

Leo will continue stalking Whitney and there’s no sign of him backing down. This will force Kat to come in Whitney’s defense once again. Will Leo finally meet his match in Kat? Will he heed her warning and leave Whitney alone for good?

Next week, Kat will be meeting a new client for her business. But it seems like Leo has something in store for her. It will all unfold as the meeting continues and it will result in a bigger problem between the two.

“EastEnders” spoilers hint that one character will die as Walford residents celebrate The Queen Vic winning “Best Pub” award. Photos of upcoming scenes surfaced and it showed several cast members, including Whitney, onboard a boat. Based on the pictures, there’s no sign of Leo. This could mean he’s left town well before the celebration or something terrible has happened to him. Nothing has been confirmed yet and viewers have to tune in to find out who among the characters will meet his or her untimely demise.