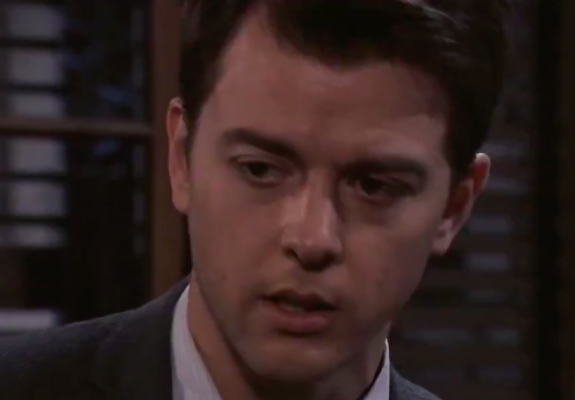 Michael already knows that Nelle moved into Brad’s apartment, having heard from a livid Willow Tait (Katelyn MacMullen) that she went to pick up Wiley and found Nelle coming out of the shower and that Brad had told her she couldn’t just let Nelle sleep on the street!

Willow had found that a flimsy excuse, since she had to be staying somewhere for her to be at Shiloh Archer’s (Coby Ryan McLaughlin) memorial, she couldn’t have come from Pentonville Prison dressed like that! She probably finds it odd that Nelle doesn’t seem to have the same parole requirements as her mother Lorraine Miller (Inga Cadranel) has, who was shocked to find out that Nelle had married Shiloh in prison! Nelle doesn’t have to have a job, live in the halfway house, or wear an ankle monitor – or at least no one has ever seen one on her since her release!

Nelle has not only plans to raise Wiley on her own, who of course is really Jonah Corinthos, her son with Michael, which she plans to achieve as Nelle Benson Archer, Shiloh’s widow, but also plans to eliminate any interfering parties, such as Michael, Willow, or even Brad himself! She is not going to let anyone raise her son except for herself, and it’s obvious she no longer trusts Brad since she told him it was not acceptable for anyone to take care of him except for herself!

Exactly how she thinks she is going to get the adoption invalidated is anyone’s guess at this point! Lucas Jones (Ryan Carnes) is in a coma that he may never wake up from, so her best bet would be to sue for custody back from Brad, proving him an unfit father – and eliminating Willow in the meantime so she couldn’t stake a claim on Wiley! However, has she thought about her old cellmate “Harmony” – Willow’s mother? She could stake a claim as well!

GH Spoilers: Michael Corinthos Pays Brad Cooper A Visit And Is Not Surprised At What He Sees

Michael pays Brad a visit – about Wiley, but he is not surprised by what he sees – Nelle holding Wiley! He demands answers from Brad, as Wiley’s godfather, as to why he would let Nelle get anywhere near Wiley, let alone let her move in with him and allow her full access to him!

Brad is concerned about Nelle’s intentions, but he is more afraid of her telling the truth and spinning it all to be his fault! He is also afraid that the truth is going to come out right then and there, with Michael, Nelle and Wiley as witnesses!