The Bold and the Beautiful Spoilers: Quinn and Brooke’s War Escalates – One Gets a Powerful Ally 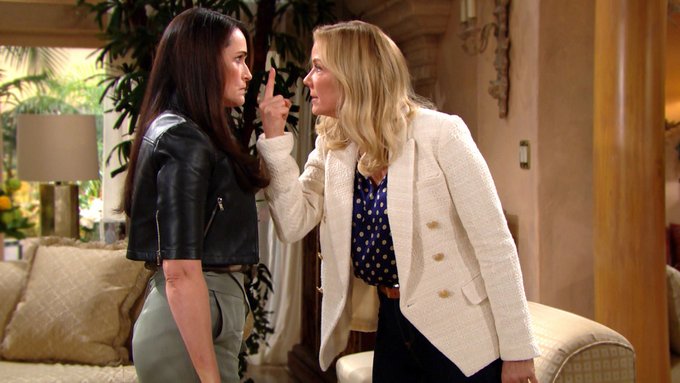 The Bold and the Beautiful spoilers reveal Quinn Forrester (Rena Sofer) and Brooke Logan Forrester (Katherine Kelly Lang) will continue their war. We already saw it get physical between the two and that is just the beginning. What steps will each woman take to get the upper hand? Plus, one of them gets a powerful ally.

She raged, begged and demanded Eric get rid of Shauna for the sake of her marriage. However, that wasn’t enough. Still ranting and raving, Brooke then ordered Eric to dump his wife.

The Bold and the Beautiful Rumors: Does Sally Have A Brain Tumor? Her Doctor Has The Answers https://t.co/8tw5lqnhXX pic.twitter.com/AzNXJQHF3J

Quinn overheard Brooke’s frantic rambling, including the part demanding Eric get rid of his wife. This set her fuming and she confronted Brooke. There was no civil conversation between these two. Both had plenty to say to each other and there was even a classic face slapping.

One Woman Gets Revenge

The Bold and the Beautiful spoilers tease the feud will continue to intensify during the next two weeks. Still furious over Brooke interfering in her marriage, she strikes back. We don’t know what she does, but it will likely affect one of Brooke’s relationships. Most likely, Quinn repays the marital attack with one on “Bridge.”

The Bold and the Beautiful Spoilers: Powerful Partnerships

However, that isn’t all that will happen between these two warring women. Thomas Forrester (Matthew Atkinson) has been trying to split up Ridge and Brooke for a long time.

He decides this feud is the perfect opportunity to join forces with Quinn. His ultimate goal isn’t just to break up “Bridge” permanently — he plans on eliminating Brooke for good. Will they get a victory in the battle against Brooke? Or will the enemy end up getting the ultimate payback against Quinn, Shauna and Thomas? Fans will have to keep watching the CBS soap opera to see how this storyline progresses.