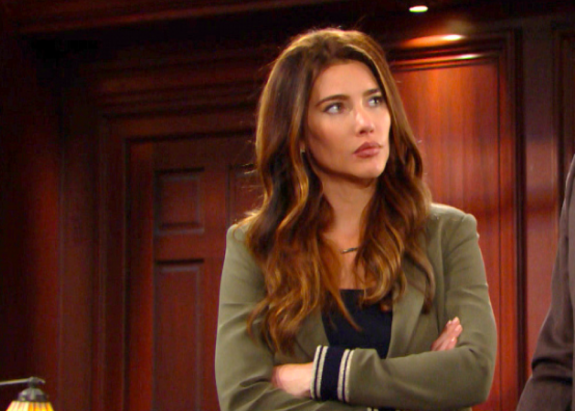 The Bold and the Beautiful spoilers for Wednesday, January 22, tease that the action is really heating up. But before we get to that, we have a programming note. As you probably know, Tuesday’s episode of B&B was nationally pre-empted, so right now the plan is for CBS to push Tuesday’s episode to Wednesday.

Of course, the impeachment hearings could cause even more pre-emptions, but we’ve got the scoop on what viewers can expect on the next episode of B&B that will air, which is currently scheduled for Wednesday, January 22nd. If that changes, we’ll keep you informed.

At any rate, on the next episode of B&B, Sally Spectra (Courtney Hope) will decide to take matters into her own hands. As B&B viewers know, she just heard from Wyatt Spencer (Darin Brooks) that he wants to end their engagement so that he can go back to Flo Fulton (Katrina Bowden). Sally wasn’t having it, and she left Wyatt in a huff, saying that she wasn’t going to make it easy on him to leave her.

Well, Sally will head straight to Flo’s apartment and confront her about Wyatt. Sally will probably assume that Flo has actively gone after Wyatt, and she may want to warn Flo about the fact that she’s not going down without a fight. But according to B&B spoilers, Flo will ask Sally an important question – she’ll want to know why Sally wants to be with someone who no longer wants her.

According to the Bold and the Beautiful spoilers, Sally will also exhibit signs of her illness during her visit to Flo. As B&B viewers will remember, when Sally was being confronted by Steffy Forrester (Jacqueline MacInnes Wood) and Ridge Forrester (Thorsten Kaye) about her designs, Sally started visibly shaking and having symptoms that mimicked a panic attack.

It seems that Sally may have more of these symptoms during her argument with Flo, as B&B spoilers say that Flo will become concerned about Sally. Perhaps this will finally convince Sally to seek medical attention for her symptoms, which seem to be very serious and troublesome.

Meanwhile, on the next episode of B&B, Wyatt will pay his mom Quinn Forrester (Rena Sofer) a visit and let her know what’s been going on in his life. It looks like he’ll tell Quinn that he’s still in love with Flo, which should make Quinn deliriously happy. He’ll also reveal that he tried to break up with Sally, but that she refused to allow the breakup. Quinn will probably have some words of advice for her son.

Next, Steffy and Liam Spencer (Scott Clifton) will spend some quality time together with their daughter Kelly Spencer (Zoe Pennington). They’ll head to the beach for a family outing with Kelly, and afterwards the topic of their cliffside kiss will come up. It appears that Liam will be getting ready to head out for work as they discuss the incident.

According to B&B spoilers, Steffy will be feeling pretty guilty about the kiss, since she initiated it right on cue, as Thomas Forrester (Matthew Atkinson) alerted her via phone that Hope Logan (Annika Noelle) was on her way to the cliff side. As Steffy and Liam discuss the kiss, Steffy will try to tell Liam about her involvement in Thomas’ scheme, and it looks like she’ll get as far as telling him that he should blame her for the whole thing.

Later, it seems that Steffy will feel guilty about the kiss and her role in Thomas’ scheme, and she’ll decide that she needs to tell Liam about just how the kiss came about. That would certainly be a tough conversation to have, but Steffy will feel determined to go there.

Next, Thomas will score a victory, at least in his mind. As B&B viewers know, Hope has been very upset about the “Steam” kiss that she witnessed not he cliff. On the next episode of the Bold and the Beautiful, Hope will open up to Thomas about the kiss. Of course, this was just what Thomas has hoped would happen.

Whether Thomas and Hope encounter each other at Forrester Creations or elsewhere remains to be seen, but it seems that Hope will be feeling chatty and Thomas will step in to comfort her. His plan to drive a wedge between Hope and Liam worked masterfully, and now he’s going to get to swoop in and be a friend to Hope.