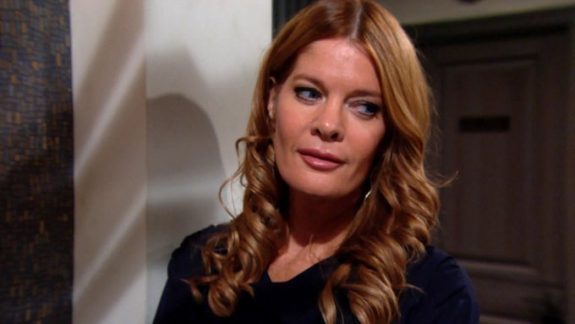 The Young and the Restless (Y&R) spoilers for Thursday, January 23, tease that Adam Newman (Mark Grossman) and Chelsea Lawson (Melissa Claire Egan) will meet up at the Grand Phoenix and discuss Connor Newman’s (Judah Mackey) first day back to school. As Adam and Chelsea kiss, Chloe Mitchell (Elizabeth Hendrickson) will notice, unimpressed, but Chelsea will tell her shortly thereafter that she doesn’t want to hear it.

Meanwhile, Phyllis Summers (Michelle Stafford) will talk with Chance Chancellor (Donny Boaz) and quickly learn that Abby Newman (Melissa Ordway) is swamped this week. They’ll go back-and-forth in typical fashion, then Chance will agree to go to dinner with Phyllis.

Chance and Adam will also talk, with Chance relaying that they have a problem, as “she” is missing and has gone off the radar. Adam will say that everything is under control. As Chelsea notices their conversation from afar, Adam will tell Chance that “she” will surface when she needs to cash one of the checks that he sends her each month. Chance will hope that he’s right about that.

Next on Y&R, at Jabot, Jack Abbott (Peter Bergman) will remark to Summer Newman (Hunter King) and Kyle Abbott (Michael Mealor) that he’s chosen the right team for this business trip. Theo Vanderway (Tyler Johnson) will listen intently. As Summer and Kyle leave, Theo will say that he’ll hold down the fort until they return.

Young And The Restless Spoilers: Jack Abbott Issues A Warning To Theo Vanderway

Later, Jack will chat with Theo about the tension he’s seen between him and Kyle. Theo will explain that they have very different ways of operating, but Jack will note that he has seen Theo provoking Kyle and that he doesn’t want it to continue. Theo will say he gets it.

Next on Y&R, Devon Hamilton (Bryton James) will chat with Fenmore “Fen” Baldwin (Zach Tinker) at Society. He’ll remark that on Fen’s next tour, they’ll provide sober support, but Fen will say that he’s not going back on tour, in order to protect his sobriety. Devon will with him the best.

Soon, Michael Baldwin (Christian LeBlanc) and Lauren Baldwin (Tracey E. Bregman) will arrive and Fen will fill in his parents on his decision, and that he’s moving to Nashville – he’s going to live with sober friends and will have a position at a recording studio. Michael and Lauren will be happy for him, but they’ll say they’ll miss him.

Meanwhile, Lola Abbott (Sasha Calle) will tell Devon about her fight with Kyle. She’ll say that the whole thing really scared her. Kyle will then arrive on his way out of town, but they’ll agree to talk once he comes back, as they kiss. Later, Theo will walk in the restaurant and see Lola, then he’ll take off.

Next on Y&R, at Crimson Lights, Chloe and Chelsea will sit with Connor and Bella Fisher (Cali May Kinder), and they’ll be thrilled that the two kids get along so well. Chloe will remark about how Connor is looking at Bella through Delia Abbott’s (Sophie Pollono) eyes and that it’s really special.

Adam will then show up, and after introducing him to Bella, Chloe and Adam will step aside. Chloe will then tell Adam that she isn’t falling for his act and she’ll remark that she wishes she’d have left him to die in the street, which will prompt Adam to realize that she pushed him out of the way of Billy Abbott’s (Jason Thompson) car.

Chloe will cop to it, but she’ll say that she did it for Billy. Adam will tell her that he’ll make Chelsea and Connor happy, but Chloe will remain snarky and skeptical. Later, Chelsea will ask Adam about his earlier conversation with Chance, but Adam will say that there isn’t anything she needs to know.

Young And The Restless Spoilers: Phyllis Summers Senses Trouble Ahead For Summer Newman

Finally, on the next episode of Y&R, Summer will talk to Phyllis at the Grand Phoenix ahead of her business trip. Summer will be taking her lucky necklace with her, and that this trip is a big deal for Kyle. Phyllis will wonder if she’s thinking of pursuing Kyle again, and she’ll remark that Summer could easily get Kyle back, since she’s much better than Lola. Kyle will then show up to pick up Summer, prompting a worried look from Phyllis as they leave.