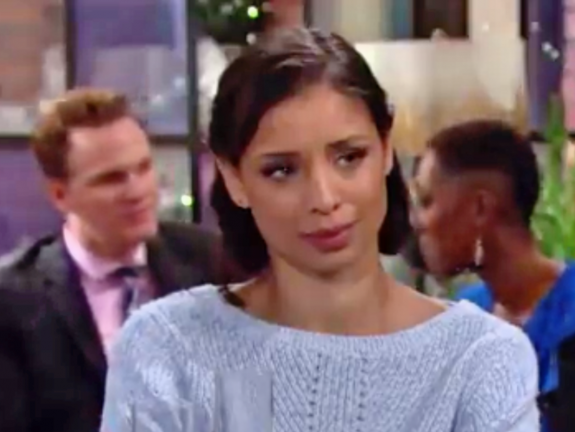 The Young and The Restless spoilers tease that Elena Dawson (Brytni Sarpy) and Amanda Sinclair (Mishael Morgan) will play nice in an upcoming episode of The Young And The Restless!

As viewers of The Young and The Restless will recall, Elena did get friendly with Amanda before, and gave her a chance. The two actually got a little bit friendly and Elena didn’t think that Amanda was all that bad – until it was revealed that Colin Atkinson (Tristan Rogers) was behind the challenge to Katherine Chancellor’s (Jeanne Cooper) will, and then she reconsidered her stance – maybe Amanda was knowingly involved in the fraud after all, since it was widely known that Amanda had called the person who hired her “an old jerk!”

Colin certainly does fit that description as most of Genoa City is concerned, although “jerk” could be interchangeable with “fraud”, “con man” and other synonyms. However, Amanda has more recently admitted that she was conned right along with everyone else involved! “The old jerk” is very good at what he does!

Devon recently admitted to Elena in an episode of The Young and The Restless last week that the resemblance of Amanda to his late wife, Hilary Hamilton (Mishael Morgan) had affected him more deeply than he had wanted to admit, even to himself. Viewers of The Young and The Restless will recall that several months back, when Devon and Elena’s romance was in its early stages, the photos and other remembrances of Hilary all over his home seemed to be a hindrance – Elena had felt like she was competing for Devon’s affections with a ghost, or at the best, memories!

He was definitely having some issues with moving on from having been widowed, with even having kept tapes of Hilary’s broadcasts that he watched frequently when he missed her! Her clothes were still in the closets as well and Elena couldn’t compete with all the Hilary reminders all over Devon’s home, so she wouldn’t go any further in a relationship with him until he could show that he was really ready, by getting rid of the Hilary shrine! But now, that he has made this admission to her about Amanda, she will have a very hard time being around her as well!

Elena Dawson Does Her Best To Make Nice With Amanda Sinclair

Amanda has changed her hairstyle, losing the bangs and now she looks even MORE like Hilary, a fact which is likely not lost on Devon, and not on Elena either, bringing to memory the “Hilary shrine” that she was trying to compete with several months ago, since there were lots of pictures of Hilary that she saw with the exact same hairstyle that Amanda is now sporting!

Elena will have a hard time resisting the thought that this also is no coincidence, but how can this not be a coincidence if Amanda was never in Genoa City or in the vicinity when Hilary was alive? Elena will do her best to make nice with Amanda, and keep her feelings and her suspicions to herself – after all, Amanda has decided to move to Genoa City permanently, lives at the Grand Phoenix, and she’ll be pretty hard to avoid!