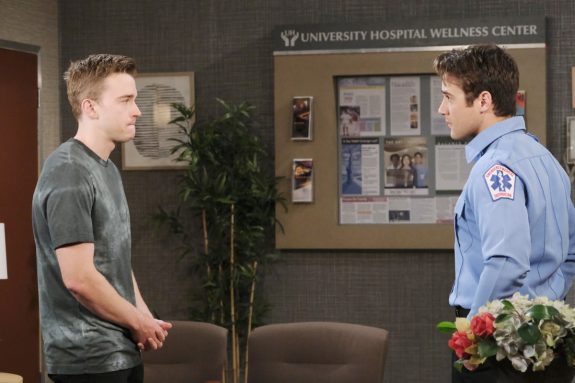 Days of Our Lives (DOOL) spoilers for Thursday, January 23, tease that Will Horton’s (Chandler Massey) guilt will grow stronger. Before Will can tell Sonny about his role in the accident, Justin Kiriakis (Wally Kurth) will break the news of Adrienne Kiriakis’ (Judi Evans) death. It’ll be a tough blow for this father and son, but Will’s going to feel even worse since he assumes he caused it.

DOOL fans can expect Will to lean on JJ Deveraux (Casey Moss). Days of Our Lives spoilers say JJ will listen to Will’s troubles and offer guidance. Whether Will reveals what he believes happened or not, JJ should know enough to understand what Will’s going through. After JJ accidentally shot Theo Carver (Kyler Pettis), the guilt was almost too much for him to bear.

DOOL Spoilers: Will Horton Will Lean On JJ Deveraux

JJ thought Theo was going to die, so he decided to kill himself before Gabi Hernandez (Camila Banus) intervened. Thankfully, Theo recovered and JJ was talked out of that horrible mistake. Still, JJ gets what it’s like to feel responsible for someone else’s suffering. He can understand Will’s perspective, so he’ll be a great person for him to confide in.

Unfortunately, Will doesn’t have all the facts. He was distracted by his phone out on the road, but he’s not the one who truly caused the crash. That was drunk Maggie Kiriakis (Suzanne Rogers), who ended up in a nearby ditch. Xander Kiriakis (Paul Telfer) helped Victor Kiriakis (John Aniston) cover that up – and he’s about to help with a different scheme soon.

Days spoilers Sarah Horton’s (Linsey Godfrey) baby will die at the hospital, so Xander will hate the idea of breaking her heart. He’ll tell Victor what happened, which will lead to a difficult decision and some terrible orders. Since Kristen DiMera (Stacy Haiduk) and Brady Black (Eric Martsolf) will have a healthy baby girl, Victor will instruct Xander to swap their kid for Sarah’s.

Days Of Our Lives Spoilers: Xander Kirakis Will Leave Kristen DiMera With Questions

Xander will pull off the switch, which will leave Kristen with questions. She’ll pester Haley Chen (Thia Megia) about where her baby is and immediately sense that something’s off. After Haley suggests Kristen should wait for the doctor, Kristen will refuse. She’ll get out of her hospital bed and follow Haley toward the stairs, which is where Haley will admit Kristen’s baby died.

Days of Our Lives spoilers say a devastated Kristen will come unhinged. She’ll fly into a rage and send Haley falling down the staircase. Sadly, Haley will wind up dead from the fall. These heartbreaking DOOL flashbacks should bring some gripping scenes!

It sounds like some hot drama’s ahead, so don’t miss all the action. We’ll give you updates as other Days details and rumors emerge. Stay tuned to the NBC soap and don’t forget to check back often for the latest Days of Our Lives spoilers, rumors, updates and news.