Eastenders Spoilers: Sharon Shocked As She Finds Out Keanu Taylor Is Still Alive 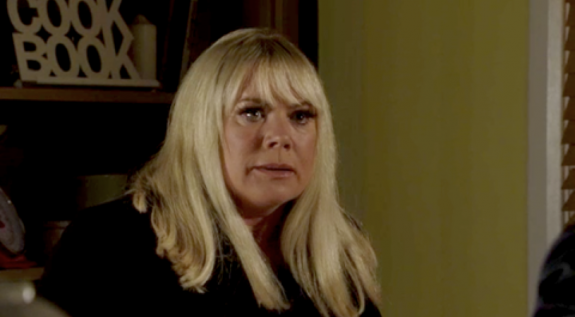 Linda Carter had accidentally shot Keanu Taylor but then staged his death along with Martin, but now Sharon finds out what happened.

Martin Fowler (James Bye) intended to kill Keanu Taylor (Danny Walters) after Ben Mitchell (Harry Reid) had blackmailed him. However, Linda Carter (Kelly Bright) first shot, and then staged the death of Keanu with Martin. Now things have come around and Sharon Mitchell (Letitia Dean) will discover that Keanu is very much alive.

Martin had drugged Keanu and taken him to an abandoned warehouse, where he was fully planning on killing Taylor. However, Linda happened upon the scene and managed to convince Martin to rather fake Keanu’s death. This left Taylor to able to go on the run, while Linda could then return to Walford. However, while Linda was drunkenly demonstrating how Keanu’s death could be faked, a gun went off, shooting Keanu in his shoulder and almost killing him.

However, despite his injuries, Keanu managed to get out of town alive. The last EastEnders fans saw of him was when he was saying goodbye to his mother, Karen, before tearfully leaving and starting a new life.

Eastenders Spoilers: The Truth Will Come Out

Linda realises she has forgotten to organise a birthday party for Mick and at the party, she sneaks off and has a drink or two. Now drunk, she bumps into Sharon in the Square, who she last saw on New Year’s Eve when they had a row. This had ended up with Sharon being kicked out of the Queen Vic in the early hours of the New Year.

In the latest episode, Linda and Sharon decide to make up. However, a rather drunk Linda lets slip to Sharon that Keanu is still alive.

In the meantime, Phil Mitchell (Steve McFadden) is organising a dinner for the family to celebrate his birthday and makes it very clear Sharon isn’t welcome to attend, which hurts her feelings. She decides to head off and find Linda to get more juicy details on Keanu and what had happened. At first, Linda doesn’t want to talk about it, but Sharon says she will go to Martin for details instead, so Linda opens up about everything, giving Sharon just what she needs to get her revenge on Phil. Find out what happens next on EastEnders on BBC One.