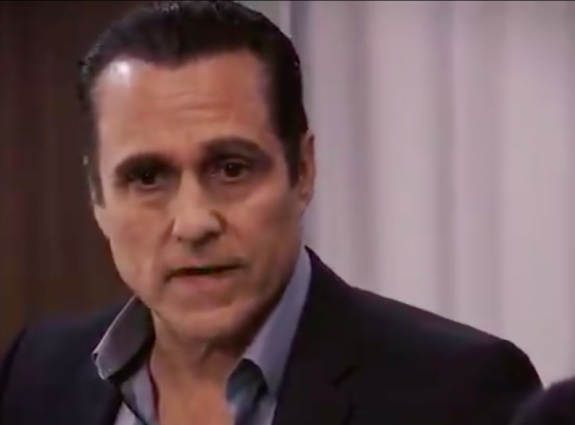 General Hospital (GH) spoilers for Thursday, January 23, tease that Sonny Corinthos (Maurice Benard) and his family will be under attack! Before we get to all the action, we should note that impeachment trial coverage has been affecting the show’s schedule. Airdates are subject to change due to preemptions, so just keep that in mind.

Now let’s discuss some hot drama. Three separate shootouts are coming up – and GH viewers will get a glimpse of them as the episode opens. Then, General Hospital will rewind the clock two hours and show us how these Port Charles residents ended up in peril.

GH Spoilers: Sonny Corinthos And His Family Will Be Under Attack

For starters, we’ll see what’s happening with Jason Morgan (Steve Burton), Sonny Corinthos (Maurice Benard) and Mike Corbin (Max Gail). At a café in Brooklyn, Mike will flirt with a woman who works there. Sonny and Jason will take a moment to mull over the mob families and this study Mike’s set to be part of. Sonny will feel like this study is Mike’s last shot, so he’ll try to be optimistic.

Unfortunately, things will take a wild turn as Jason, Sonny and Mike prepare to leave. Jason will notice someone with a gun before a shootout begins. Bullets will be flying all over the place, so GH fans won’t want to miss all the chaos.

Josslyn will insist Willow could take back “Wiley Cooper-Jones” (Erik and Theo Olson), but Michael will note that the adoption’s final. They’ll continue to debate as Josslyn reminds Michael that he’s “Wiley’s” godfather. Lucas wanted Michael to protect “Wiley,” so Joss will think her brother needs to consider what Lucas would want.

Meanwhile, Carly Corinthos (Laura Wright) will spar with Nelle at the Metro Court. She’ll be convinced Nelle’s going to land herself back in Pentonville eventually. When Nelle keeps bringing up Jonah Corinthos, it won’t go over well with Carly. She’ll invite Nelle to mention Jonah one more time and see how it works out for her!

Nelle will toss some threats around during this confrontation, but Carly won’t seem worried. She’ll later join Gladys Corbin (Bonnie Burroughs) and head to the warehouse, where Carly will give Tony the worker some papers. Gunfire will erupt there as well, so Bonnie will run toward a protected area with Tony while Carly ducks for cover alone.

Back at the Metro Court, Willow will gripe to Sasha Gilmore (Sofia Mattsson) about the Nelle situation. She’ll feel like Brad Cooper’s (Parry Shen) losing control without Lucas around. Willow won’t know how she can be OK with Brad being a father on his own. She’ll have serious concerns about “Wiley’s” well-being.

Willow will eventually tangle with Nelle as she exits. Nelle will gleefully rub it in that Willow gave up her child, but Willow will just be glad Nelle isn’t a mother herself. Of course, Willow’s obviously out of the loop on the real story!

Down on the docks again, Laura Collins (Genie Francis) will have pier renovations to consider. She’ll speak with Michael about those before Sasha appears. General Hospital spoilers say Sasha will reveal her decision. It turns out Sasha’s going to move in the Quartermaine mansion after all and help Michael handle Nelle.

Josslyn will be gone by then, but she’ll come back for her journal. When she spots a man with a gun, Josslyn will cry out before shots are fired. She’ll take cover along with Laura, Sasha and Michael. Unfortunately, Laura will decide to change spots at one point. She’ll get hit by a bullet and slump down to the ground.

On the plane ride home from France, Ava Jerome (Maura West) will offer her own special brand of encouragement to Nikolas Cassadine (Marcus Coloma). He’ll still be down in the dumps over Spencer Cassadine’s (Nicolas Bechtel) reaction to his deception. Ava will stay positive before talk turns to the post-nup. Nikolas will decide he’s willing to sign, but he’ll want Ava to seemingly be his devoted wife.

Since cheating could make him look weak, Nik will demand that Ava be faithful. Ava will want that to go for Nikolas as well. They’ll agree that there’ll be no lovemaking, but they’ll stay loyal. With that settled, Nikolas will be willing to sign the post-nuptial agreement in exchange for the codicil.

Other General Hospital spoilers say Valentin Cassadine (James Patrick Stuart) will make bail. The attempted murder charge on Ava will be dropped since there were no witnesses around to back it up. Valentin will remind Lulu that he still shares custody with her and intends to see Charlotte. Lulu will vow to file a restraining order, so this battle’s getting ugly!

Finally, Valentin will get reassurance from Martin Gray (Michael E. Knight). Nelle has no idea that Martin’s actually working for Valentin instead of her, so some curveballs are brewing for the schemer. We’ll give you updates as other GH news and rumors emerge. Stay tuned to the ABC soap and don’t forget to check back often for the latest General Hospital spoilers, rumors, updates and news.