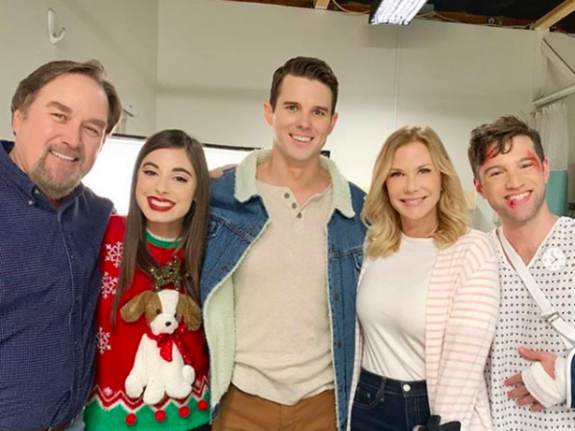 It’s a long way before Christmas but “The Bold and the Beautiful” star Katherine Kelly Lang already has an upcoming movie for the holidays. The actress has joined the cast of “The Christmas Dance.”

Lang will star on the film alongside Richard Karn, and Master P. She will take on the role of Mary in the movie where Michael Arcell will make his debut as a writer and director.

Arcell announced on Instagram that he is directing his first feature film. In his post, he detailed some of the things he had to go through to get where he is right now. He also mentioned his struggles and the mistakes he made. But despite all that, by God’s Grace, he’s finally where he wants to be.

The Bold and the Beautiful: Thomas and Quinn Team Up To Bring Down Brooke – Ultimate Showdown Ahead

The Bold and the Beautiful Spoilers: Brooke Forrester Finds A New Enemy

“The Bold and the Beautiful” spoilers reveal that Brooke Forrester (Katherine Kelly Lang) will find a new enemy in Quinn Forrester (Rena Sofer). Viewers already know that Eric (John McCook) found out about Ridge Forrester (Thorsten Kaye) kissing Shauna Fulton (Denise Richards). Because of that, he’ll take Brooke’s advice and boot Shauna out of the mansion, leaving Quinn fuming but unable to do anything.

Quinn will be furious but her anger will be directed at Brooke. She’ll plan to get revenge on her for what she’s done, which she considers as an attack on her already shaky relationship with Eric.

The Bold And The Beautiful Spoilers: Thomas And Steffy’s Spat – Thomas Makes Her A Deal https://t.co/BEMGTdLVpB pic.twitter.com/dpQKlCNrmX

Meanwhile, Thomas Forrester (Matthew Atkinson) will learn about the confrontation between Brooke and Quinn. He’ll probably consider an alliance with Quinn. Viewers may recall that he tried to enlist Shauna’s help to break up Brooke and Ridge. But Shauna said she doesn’t want to undermine their marriage.

Will Quinn have the same response? Fans know what Quinn is capable of especially when she feels she’s being attacked. Now that she’s been triggered, she’ll most likely retaliate and find a way to get back at Brooke. Will she agree to be part of Thomas’ plan?

If Thomas and Quinn team up, it will surely spell trouble for Brooke. They both have something against her and if they put their minds together, they can wreak havoc in Brooke’s life.