The Bold and the Beautiful Spoilers: Thursday, January 23 – Sally Confronts Flo About Wyatt – Steffy’s Riddled With Guilt About Her Secret From Liam 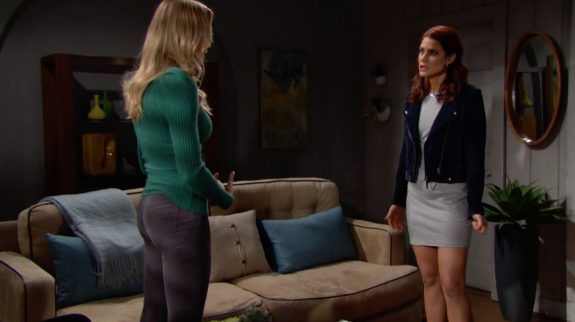 The Bold and the Beautiful spoilers for Thursday, January 23, tease that the action is really heating up on the CBS soap. But before we get to that, we have a quick programming note. As you probably know by now, B&B did not air on Tuesday and Wednesday due to the impeachment hearings. Assuming that CBS gets back to regular broadcasting on Thursday, we have the scoop about what you can expect right here.

B&B Spoilers: Hope Logan Gets Comfort From An Unlikely Source

First off, Thomas Forrester (Matthew Atkinson) will lend Hope Logan (Annika Noelle) his friendship and a shoulder to cry on. As B&B viewers know, Hope was devastated when she saw Liam Spencer (Scott Clifton) and Steffy Forrester (Jacqueline MacInnes Wood) kissing at the cliff house. In fact, she was so upset that she immediately ended her relationship with Liam right then and there.

Well, it seems that Thomas will score some good fortune when Hope decides to open up to him about her frustration over the situation. According to the Bold and the Beautiful spoilers, Hope will need someone to vent to about the kiss, and Thomas will happen to be there for her.

Of course, this is exactly what Thomas was banking on when he set the whole situation in motion. As B&B viewers know, he was responsible for orchestrating the whole “Steam” kiss, along with a little help from Steffy, who kissed Liam right on cue when Thomas signaled her. Now, Thomas will be thrilled as Hope leans on him for support…just like he planned.

Bold And The Beautiful Spoilers: Flo Fulton Gets A Surprise Visitor

Next, Flo Fulton (Katrina Bowden) will be happily reflecting on her kiss and apparent reconciliation with Wyatt Spencer (Darin Brooks) when she receives a visitor. She’ll probably be quite surprised to see Sally Spectra (Courtney Hope) at her door.

According to B&B spoilers, Sally will head right to Flo’s apartment after her conversation with Wyatt during which he attempted to break up with her. As B&B viewers know, Sally declared that she wasn’t going to make it easy on Wyatt for him to leave her, and it looks like she means it, as she’ll confront Flo and claim her stake on Wyatt.

But Sally will be shaken when Flo points out that Sally’s fighting for something that’s really futile – after all, Wyatt no longer wants her. Flo will wonder why Sally wants to be with someone who doesn’t want her. That should be a pretty upsetting conversation for Sally to take.

B&B Spoilers: Flo Fulton Worries About Sally Spectra After She Seems Off

B&B spoilers also indicate that Sally will start to have some difficulties during her visit with Flo – difficulties that will really concern Flo. As B&B viewers will remember, Sally’s hands shook uncontrollably as she tried to design at Forrester Creations recently, and then when Steffy and Ridge Forrester (Thorsten Kaye) were threatening to terminate her, she started shaking terribly to the point where Steffy noticed.

It appears that Sally will start shaking again during her visit with Flo, and B&B spoilers say that Flo will definitely notice. Let’s Hope that Sally decides to seek medical help for her symptoms, which could signal a very serious condition.

Meanwhile, Quinn Forrester (Rena Sofer) will get a visit from Wyatt, who will need some advice from him mom. Since Wyatt’s breakup with Sally was a total disaster, he may feel the need to get some feedback on how to handle the situation. Of course, Quinn was never a big Sally fan, so she’s going to be thrilled that Wyatt has taken steps to break up with Sally and get back with Flo.

Bold And The Beautiful Spoilers: Steffy Forrester Feels Guilty About Her Big Secret

Finally, Steffy will be feeling particularly guilty about her kiss with Liam. She, Liam, and Kelly Spencer (Zoe Pennington) will spend some quality time together as a family. It looks like they’ll take their daughter to the beach, which will be great, since Liam hasn’t been spending a lot of time with Kelly lately.

But later, before Liam heads in to work, the topic of their shared kiss and his breakup with Hope will come up, and Liam will try to assure Steffy that he doesn’t blame her for the kiss or for the ensuing scene with Hope. It looks like that will make Steffy feel pretty bad, since she knows that she was part of Thomas’ plan to orchestrate that whole scene.

Steffy will try to tell Liam about her involvement in Thomas’ scheme, and it appears that she’ll even say that Liam should blame her for the kiss, but she won’t get the chance to come clean. Later, though, Steffy will privately decide that she needs to tell Liam what really happened, and that it would only be right to do so.