Bold And The Beautiful Spoilers: Quinn’s Fire Is Fueled When Eric Delivers Bad News To Her About Shauna’s Living Arrangement 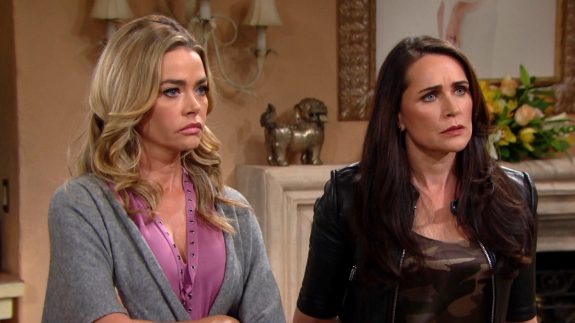 As viewers of The Bold and The Beautiful will recall, Eric walked in on a huge argument between Quinn and Shauna and Brooke Logan Forrester (Katherine Kelly Lang) after he had left the room after Brooke had told him to get rid of both Quinn and Shauna, and that Shauna had put the moves on Ridge Forrester (Thorsten Kaye) and that Quinn had encouraged her to do so, and also that Quinn had physically hit her in the face!

The Bold and the Beautiful Spoilers: Sally’s Romance and Career Fall Apart – Will She Survive This Crisis?

He talked to all three women and told Quinn in particular to get her act together, although he tried to be fair and not favor one woman over another, other than reminding Brooke that Quinn is his wife and that he loves her, and that he was not about to leave her! However, he was not at all happy that Shauna and Ridge had been kissing when Ridge and Brooke were trying to work things out.

Bold And The Beautiful Spoilers: Eric Forrester Tells Quinn Forrester That Shauna Fulton Has To Move Out

Eric will probably embarrass his son Ridge a little bit by talking to him about what has been going on between him and Shauna, just to make sure it really is the truth before he decides to evict Shauna. He decides after looking at all the “evidence” that it really is best that Shauna find herself another home. He calls Quinn in and tells her that Shauna has to leave the Forrester guest house and find herself another place to live!

The Bold And The Beautiful Spoilers: Thomas And Steffy’s Spat – Thomas Makes Her A Deal https://t.co/BEMGTdLVpB pic.twitter.com/dpQKlCNrmX

Quinn absolutely blows her top! She blames Brooke for ruining her best friend’s life and again accuses Brooke of making trouble and trying to break up her and Eric, after all, Brooke had made her way up the corporate ladder on her back by sleeping with all the Forresters and probably half of the Spencers as well, and she is just absolutely on fire with anger! Furthermore she says she is not backing down and she is not going to tell Shauna that she has to leave!

She makes that perfectly clear by telling both Eric and Ridge that she will not back down from her stand or abandon her best friend Shauna to the street! Either Eric or Ridge may remind Quinn that Shauna doesn’t have to be out on the street just because she’s out of their guest house, after all her daughter Flo Fulton (Katrina Bowden) just came back to town and they are sure that she won’t let her mother be without a place to live. This will just make Quinn even more livid and determined to get rid of the problem of Brooke Logan Forrester for good!