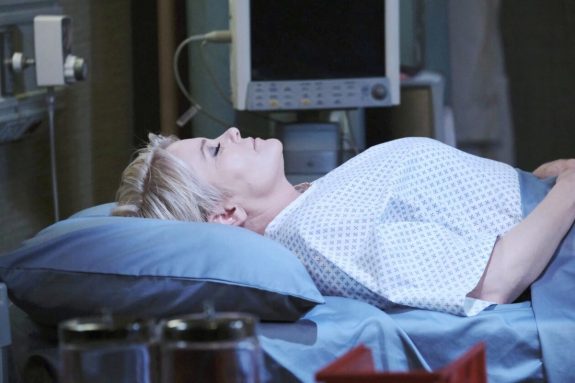 Days of Our Lives (DOOL) spoilers for Friday, January 24, tease that Abigail DiMera (Kate Mansi) will make a horrifying discovery. At the bottom of the stairs, Abigail will find Haley Chen (Thia Megia) dead after her tumble. Sadly, Abigail will have to break the news to JJ Deveraux (Casey Moss). He was all set to propose, but he’ll have to bid Haley farewell forever instead.

While JJ cries over losing Haley, Kristen DiMera (Stacy Haiduk) will slip into a strange zombie-like state. She won’t even really remember what just went down. DOOL fans know Kristen followed Haley and ended up causing her fall, but Kristen will be super out of it on Friday. She’ll leave Brady Black (Eric Martsolf) concerned as he encourages her to think back and try to recall what happened.

Days spoilers say Brady will get updates on Haley’s death, so he’ll eventually put it all together. He’ll be shocked when he realizes Kristen’s responsible. Over with Will Horton (Chandler Massey), he’ll finish his confession to Sonny Kiriakis (Freddie Smith). Justin Kiriakis (Wally Kurth) will hear this awful story as well, which isn’t the correct version of events.

Maggie Kiriakis (Suzanne Rogers) caused the accident, but her car was tucked down in a ditch and concealed by brush. Will didn’t see any other cars on the road and was distracted by the text he was sending. Although Will doesn’t remember veering into Adrienne Kiriakis’ (Judi Evans) lane, he figures he must’ve.

Sarah Horton (Linsey Godfrey) believes she saw a black car just before the crash, but Will’s car is gray. However, that’s close enough and won’t create any red flags. Victor Kiriakis (John Aniston) and Xander Kiriakis (Paul Telfer) have resolved not to say anything, so Will’s admission will stand. He should leave Justin and Sonny feeling a mess of difficult emotions on Friday.

Days Of Our Lives Spoilers: Kristen's Entire World Is Shattered When She And Brady Are Told Their Baby Died #DOOL #Days #DaysOfOurLives https://t.co/HBpRDaOAiJ

Days Of Our Lives Spoilers: Sarah Horton Believes She Saw A Black Car Before The Crash

Will could’ve waited to send that text, so anger should definitely be something Sonny and Justin battle. They’ll also be heartbroken that someone they love is to blame. It’ll be tough for Justin and Sonny to wrap their heads around Will’s guilt in all this.

Other Days of Our Lives spoilers say Jack Deveraux (Matthew Ashford) will spend some time with Adrienne’s body. She looks so perfect and peaceful that it’ll be hard for Jack to accept that she’s really gone. Nevertheless, Adrienne is indeed dead and that’s something Jack will have to come to grips with. He’ll tell his sister goodbye and cry over losing her far too soon.