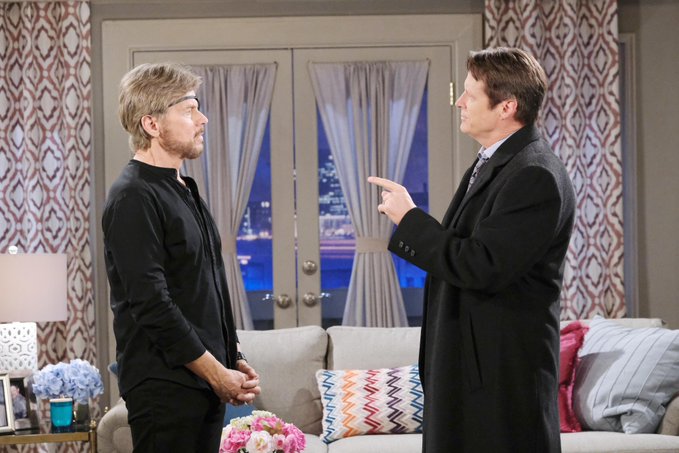 DOOL spoilers indicate that the new Stefano DiMera (Stephen Nichols) tricks John into leaving Salem. He convinces him to go on a fake search for Stefano. Of course, John has no idea that Steve is brain-chipped to think he is Stefano, who then has to act like Steve in order to blend in and avoid authorities.

Even though John doesn’t want to leave Dr. Marlena Evans (Deidre Hall), he knows finding Stefano could protect his wife… if they can find him.

While John and “Steve” are out on a personal mission, it allows Princess Gina (Kristian Alfonso) to begin the next step in their deceitful plan. She tries to coax Marlena into a trap. However, it is speculated that the psychiatrist has a gut feeling that something isn’t quite right.

Days of Our Lives spoilers confirm “Steve” and John run into some familiar faces. It is Tony and Anna. We don’t know where the Salemites meet up outside of town. However, it is revealed that Tony and Anna decide to leave town after a business betrayal. The couple ends up returning to Europe.

As they all greet each other and chit chat, Anna does or says something that sets off Steve-ano. The mood turns sour when an annoyed “Steve” verbally attacks Anna. John isn’t impressed and as for Tony, he will not be pleased about his wife being mistreated for no good reason.

Do you think Tony and/or Anna suspect that Steve is quite literally not himself? Will his verbal outburst tip others off that something is wrong? When will this elaborate charade end? Fans will have to keep watching the NBC soap opera to see what happens next.