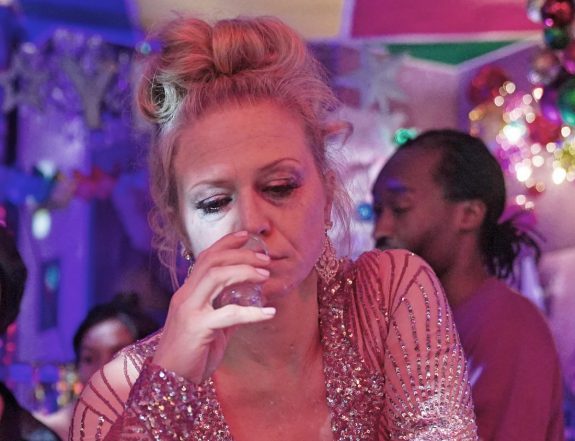 Mick has supported his wife all along, but is forced to take drastic action when Shirley finds a hidden bottle of vodka.

In the last few months, Linda Carter’s (Kellie Bright) drinking problem has been getting totally out of control. Her husband, Mick (Danny Dyer) tries his best to support Linda during this difficult time, but now things are getting out of control and he has to do something drastic about the situation.

Eastenders Spoilers: Sharon Shocked As She Finds Out Keanu Taylor Is Still Alive

In the latest episode of EastEnders, Linda was nursing a nasty hangover. Linda had been so drunk, she had told Sharon (Letitia Dean) the whereabouts of Keanu (Danny Walters). Mick scolded Linda for her actions, but Linda went on to blame him for her actions.

However, Shirley (Linda Henry) wasn’t impressed by Linda’s words and went on to warn Mick that he had to do something about Linda. Mick didn’t want to listen. Shirley decides to take some action to protect her son and in the process she uncovers a bottle of vodka, hidden in their bathroom.

When Shirley revealed her discovery to Mick, he was upset, but he was already concerned, as he had just had a phone call from Ollie’s school. It turns out Miss Gardiner was asking Mick and Linda to visit the school as she wanted to talk to them about Ollie.

Mick managed to track down Linda and told her the news of the meeting at Ollie’s school, but she turned up late. However, things got really bad when Gardiner revealed that Linda had been accused of mistreating her son.

Linda, whose children mean everything to her, was horrified to hear the accusation and so was Mick. Mick knows that despite her problems, Linda would never do anything to harm her children. Linda wants to know who had made the accusation and believes Shelley could have been the one accusing her of abusing Ollie. She starts ranting about this in front of Miss Gardiner, which prompts the teacher to reveal who her accuser actually was.

After hearing the name, both Mick and Linda are totally shocked. When they get back to The Vic, Mick asks Chantelle (Jessica Plummer) to care for Ollie while they tried to sort things out, stressing that Ollie isn’t happy.

Mick took Ollie to Chantelle’s house and on returning wonders why Linda had shut herself in their room. He heads upstairs to check on her, only to find Linda is very drunk. She comes out of their room with a suitcase in one hand and a bottle of alcohol in the other. Linda ranted and blamed Mick for everything and really tried her best to hurt him.

This led to Mick picking Linda up, taking her to their room. He threw Linda on the bed and left, locking the door behind him. Mark continues trying to help Linda recover from her problems, but what will happen when she becomes sober and finds out what her loving husband has done? Keep watching EastEnders to find out what happens next.