‘The Bold and the Beautiful’ Spoilers: Brooke Spinning Out Of Control – Ridge To Take All The Blame? 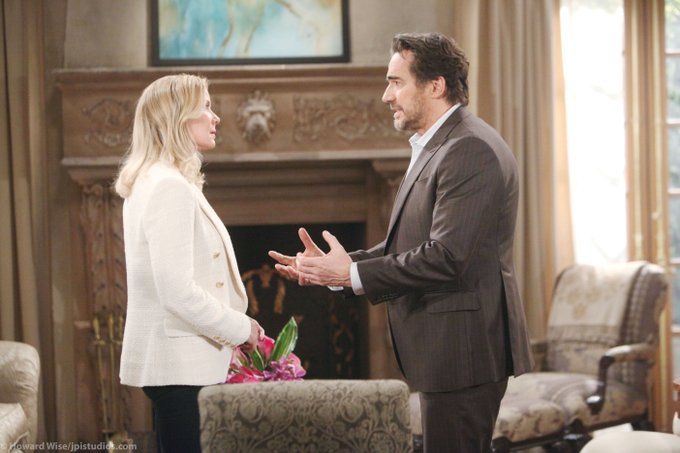 The Bold and the Beautiful spoilers tease that Ridge Forester (Thorsten Kaye) sparked the drama that triggered Brooke Logan’s latest personality conflict. Telling his wife about the depth of involvement with Shauna Fulton (Denise Richards) was a natural soul-poke.

Quinn Forrester (Rena Sofer) is one of Brooke’s many enemies. It’s understandable that she came to the defense of her longtime friend, Shauna, after Brooke slapped her face by returning the act in kind. Of course, this action could be seen in a legal light, with charges pressed, if anyone wants to push the incidents to a higher level.

The header to this section points to the origin of the current conflict. Regardless of the disagreement he had with Brooke, there was no rational reason for Ridge to seek liquid solace at Bikini Bar. But he did and then Shauna was written into the script.

Devoted B&B fans knew in their guts that those scenes were leading somewhere dangerous. While Ridge wasn’t looking for anything more initially, his past patterns of behavior, including kissing Quinn, strongly indicated that trouble was ahead and here we are.

The Bold and the Beautiful Spoilers: Thursday, January 23 – Sally Starts Shaking During Confrontation With Flo – Thomas Comforts Hope Over Her Breakup https://t.co/0in2gisROP pic.twitter.com/EjMQCJPtEu

Thomas Forrester (Matthew Atkinson) is the specific person who’s been triggering Brooke. His actions in the Beth Spencer (Madeline Valdez and River Davidson) arc were so outrageous, yet, when fully revealed resulted in Ridge covering for his son. That choice was rightly too much for Brooke to take.

Shauna represents one of Ridge’s misguided decisions that have created real consequences. Brooke, in wanting to protect both her daughter and husband, from heartache, has done everything possible to try and change the dynamic. But her efforts weren’t successful.

Ridge’s decision to come clean with Brooke about his involvement with Shauna was genuine. But in light of all that’s happened, his choice also represents a lack of thought regarding timing.

A major storyline can shift within one episode. While Bridge looks certain to be over, it’s still possible for a turnaround.

With the facts now on the daytime table, Brooke and Ridge can overcome their latest differences. They’ve often acknowledged that they still love each other and can’t allow their children’s issues to consume them. With that sentiment in mind, they also shouldn’t allow Shauna and Quinn to distract, or deter them.