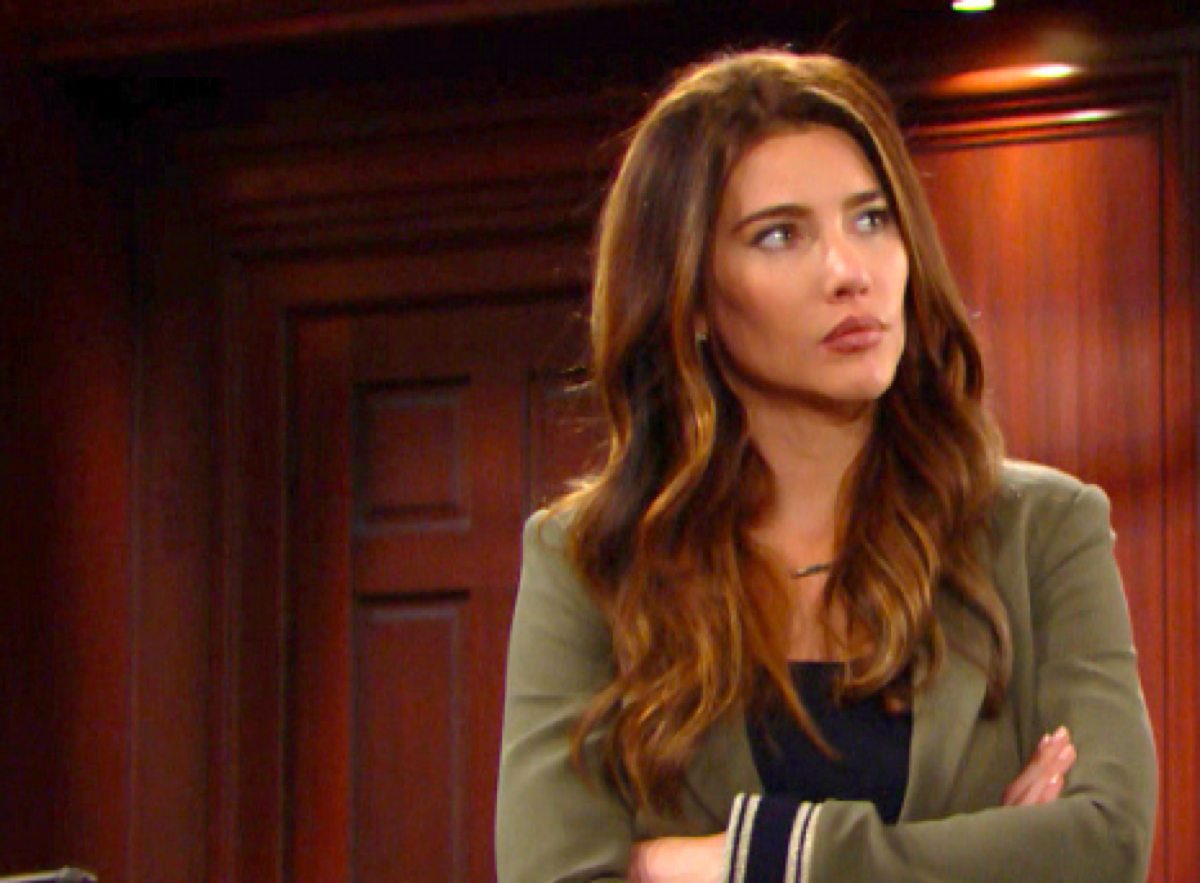 The Bold and the Beautiful spoilers for Friday, January 24, tease that the action is really heating up on the CBS soap. But before we get to that, we have a quick programming note. As you probably know, B&B has not aired for the past several days due to the ongoing impeachment hearings. Assuming that CBS gets back to regular daytime programming on Friday, we have the scoop about what you can expect right here.

First off, Thomas Forrester (Matthew Atkinson) will be feeling victorious. As B&B viewers know, he set up a dramatic scene in which Hope Logan (Annika Noelle) found Steffy Forrester (Jacqueline MacInnes Wood) and Liam Spencer (Scott Clifton) in the middle of a steamy kiss out at the cliffside. Thomas signaled Steffy, and on cue, she kissed Liam, right at the moment that Hope walked up.

Well, now Hope will find herself devastated and in need of comforting, and Thomas will be right there by her side. It looks like Hope will ultimately accept Thomas’ comfort and friendship in her time of need as she opens up to him about how hurt she is over her breakup with Liam. Thomas will have Hope right where he wants her.

Bold And The Beautiful Spoilers: Quinn Forrester Gets Some Interesting News From Wyatt Spencer

Next on B&B, Wyatt Spencer (Darin Brooks) will visit with his mom Quinn Forrester (Rena Sofer), and he’ll share some news that will get her pretty excited. He’ll share that he recently tried to break up with Sally Spectra (Courtney Hope) so that he could reunite with Flo Fulton (Katrina Bowden). He’ll tell Quinn that he’s still in love with Flo and that the two of them plan to give their relationship another go.

Of course, that’s going to make Quinn pretty happy, since she’s wanted Wyatt to be with Flo rather than Sally for a long time now. In fact, Quinn might get a little too enthused about the whole thing, and Wyatt might have to reign her in a bit, as she gushes about Wyatt’s new future with Flo.

Meanwhile, Steffy will find herself feeling guilty about helping Thomas set up the big kiss on the cliff that Hope witnessed. She and Liam will spend some family time with their daughter Kelly Spencer (Zoe Pennington) at the beach, and it looks like they’ll have a great time, but when it’s time for Liam to get dressed and get back to the office, Steffy will start feeling bad about what she did.

It looks like Steffy will try to come clean with Liam about her role in Thomas’ plan, and that the kiss came about because of Thomas. They’ll chat about the kiss, and B&B spoilers say that Liam will reassure Steffy that none of it was her fault. That will probably lead Steffy to feel even guiltier, especially since Hope broke up with Liam over the whole thing.

The Bold and the Beautiful spoilers say that after Liam leaves for work, Steffy will resolve to tell Liam about the whole sordid story. However ongoing B&B spoilers indicate that Steffy will soon be confronted by Thomas, who will pressure her into keeping the secret forever. We’ll see what Steffy decides to do.

Finally, Sally will march right to Flo’s apartment, where she’ll intend to set the record straight with Flo. Sally will be adamant that she’s not going to just accept that Wyatt’s breaking up with her for Flo…again. She’ll promise to fight for Wyatt and give Flo a run for her money. But according to B&B spoilers, a couple of things will happen next.

First off, Flo will have a pointed question for Sally. She’ll wonder why Sally wants to be with someone who no longer wants her. That will be a good question, and Sally probably won’t have a good answer for it. But it seems that Sally will suddenly start having some noticeable physical symptoms while she’s at Flo’s place.

It seems that Sally will start shaking again, and her hands will seriously tremble. That will alarm Flo, who will wonder if Sally’s ok. Sally might just chalk it up to being really emotional over Wyatt’s attempted breakup, but unfortunately B&B spoilers indicate that Sally will end up with a very serious medical problem down the road.