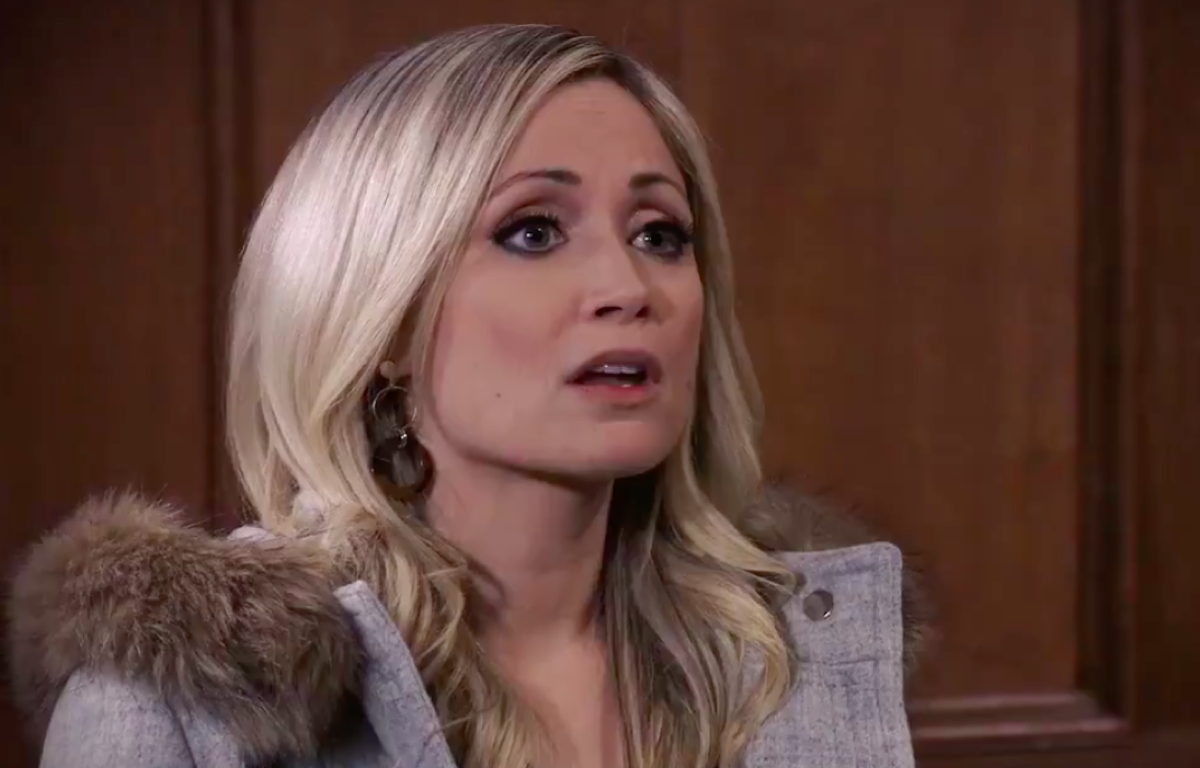 General Hospital (GH) spoilers for Monday, January 27, tease that three shootouts will bring total chaos. We should point out that impeachment trial coverage has been affecting GH’s schedule. Keep in mind that more preemptions may be ahead, which could alter future airdates.

Now we can dive in and discuss all the action happening in this episode. As for those shootouts, General Hospital will show us a preview of the gunfire in three locations: Sonny Corinthos’ (Maurice Benard) warehouse, a diner in Brooklyn and down on the docks. After a glimpse of the action, the show will take us back in time and reveal the events that unfolded two hours prior.

For starters, Jason Morgan (Steve Burton) and Sonny Corinthos (Maurice Benard) will spend some time at that Brooklyn diner with Mike Corbin (Max Gail). While Mike flirts with a waitress, Sonny and Jason will discuss the study that Mike’s set to be part of. Since this Mike’s last shot, Sonny will be hopeful about it.

Later, Jason will prepare to leave with Mike and Sonny before spotting a gunman. General Hospital spoilers say Jason will pull his own gun and shout out a warning to the other patrons. Shots will ring out while Michael Corinthos (Chad Duell) talks to Josslyn Jacks (Eden McCoy) in Port Charles. They’ll be down on the docks, where they’ll debate the situation surrounding Nelle Benson Archer (Chloe Lanier).

Josslyn will fear for Michael’s life, especially now that he’s letting Nelle move in the Quartermaine mansion. She’ll suggest Michael should talk Willow Tait (Katelyn MacMullen) into revoking the adoption and taking “Wiley Cooper-Jones” (Erik and Theo Olson) back. Michael will note that the adoption’s final, but Joss will think Michael has a responsibility to protect “Wiley” as his godfather. He has to think about what Lucas Jones (Ryan Carnes) would want.

At the Metro Court, Carly Corinthos (Laura Wright) will clash with Nelle as usual. She’ll be furious when Nelle keeps bringing up Jonah Corinthos name, so she’ll date Nelle to say it one more time and see what happens. Carly will be convinced that Nelle’s headed back to Pentonville eventually. She won’t want to stick around and listen to Michael’s delusional ex, so she’ll take off.

Over with Willow, she’ll talk to Sasha Gilmore (Sofia Mattsson) about “Wiley.” Thanks to all this Nelle drama, Brad’s losing his grip. Willow will feel like Lucas was the stable dad and without him in the picture, she won’t see how she’s supposed to be OK with it. She’ll be uneasy about Brad raising “Wiley” on his own.

Afterward, Nelle will push Willow’s buttons about giving up “Wiley.” As Willow enters the elevator, she’ll admit that she’s heartbroken over Michael’s loss, but she’s increasingly grateful that Nelle’s not a mother. Nelle will stew after the elevator doors close.

At Crimson, Charlotte Cassadine (Scarlett Fernandez) will be questioned about the sliced photo of Sasha. When Lulu Spencer (Emme Rylan) wonders what happened here, Charlotte will claim Nina Reeves (Cynthia Watros) did it. She’ll leave the office with Lulu, so Nina will spend some time alone with Jasper “Jax” Jacks (Ingo Rademacher).

Jax will enjoy some Champagne and a cheese plate with Nina. He’ll hope to help Nina move forward and will ask her to dance. Jax will end up leaning in and planting a kiss soon enough. Next, Valentin Cassadine (James Patrick Stuart) will get out on bail. The attempted murder charge on Ava Jerome (Maura West) was dropped, so Valentin will be a free man for now.

Lulu won’t be happy about that, but Valentin will remind her that they still share custody. That’s when Lulu will reveal her plans to file a restraining order and keep Valentin away from Charlotte. Afterward, Valentin will chat with Martin Gray (Michael E. Knight) about Nelle. He’ll get reassurance that Nelle has no clue that Martin’s working for Valentin instead of her.

General Hospital Spoilers: Michael Corinthos Will Meet Up With Laura Spencer On The Docks

Laura will meet up with Michael on the docks, where she’ll express her waterfront redevelopment goals. She’ll step aside for a call while Michael speaks with Sasha, who’s decided to move in the Quartermaine mansion after all. Josslyn will come back after leaving her journal behind. She’ll spot a shooter before they all take cover against the gunfire. When Laura changes spots suddenly, she’ll get shot.

At Sonny’s warehouse, Carly will pass along some paperwork to Tony. Gladys Corbin (Bonnie Burroughs) will also be on hand as the third attack strikes. She’ll go into a side room with Tony while Carly’s left to seek cover alone.

GH Spoilers: Ava Jerome Will Give Nikolas Cassadine A Bit Of Encouragement

On a plane, Ava Jerome (Maura West) will give Nikolas Cassadine (Marcus Coloma) a bit of encouragement – at least in her own way. Nik will still be upset over how things turned out with Spencer Cassadine (Nicolas Bechtel), but he’ll eventually settle on that codicil deal. He’ll promise to sign the post-nup on one condition. Ava will have to remain faithful despite it being a marriage of convenience. Nik will think Ava’s cheating would make him look weak.

Nikolas and Ava will agree that their marriage won’t include lovemaking, but they’ll be loyal. General Hospital spoilers say this twisted relationship of theirs is bound to bring some fun snags! We’ll give you updates as other GH news and rumors emerge. Stay tuned to the ABC soap and don’t forget to check back often for the latest General Hospital spoilers, rumors, updates and news.