The Young and the Restless Spoilers Monday, January 27: Amanda Ends Her Friendship With Billy, Summer and Kyle Kiss, and Victoria Talks With Nick 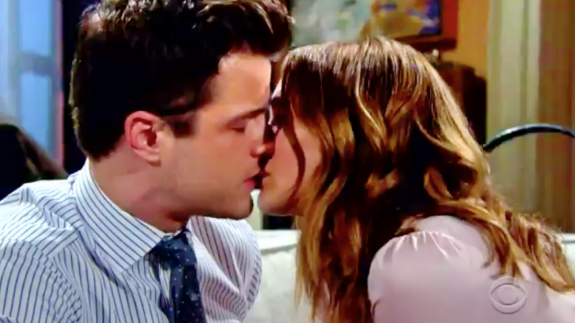 Theo Vanderway (Tyler Johnson) is at Society and notices Lola Rosales (Sasha Calle) is being cold to him. He realizes it’s because of what happened at the party the other day. He apologizes for his behavior, then tells Lola she’s his only friend. Mariah Copeland (Camryn Grimes) watches them from afar and comments to Abby Newman (Melissa Ordway) that Theo’s not here for the food. Abby then warns Mariah against doing anything to interfere in the situation. Meanwhile, Lola’s cold demeanor diminishes and she jokes that Theo’s going to be Society’s customer of the year. Theo is pleased when Lola’s mood lightens and she assures him they’re still friends.

The Young And The Restless News: YR’s Zach Tinker Joins Cast Of Netflix’s 13 Reasons Why

Abby continues to be Mariah not to cause any trouble, and Mariah assures her she won’t. She says the reason she came by was to get Abby to go out for a girls’ night.

Young And The Restless Spoilers: Theo Vanderway And Lola Chat

Theo and Lola chat, and he explains how comfortable he feels confiding in her. This makes Lola uneasy and she goes into the kitchen. Mariah comes over to the bar and confronts Theo about hitting on Lola. Theo says he and Lola are just friends, then he brings up Tessa Porter (Cait Fairbanks) becoming a big music star. Mariah issues a warning saying she’ll make Theo’s life trouble if he continues to cause problems for Kyle and Lola.

Mariah then rejoins Abby at the table, where the conversation switches to Phyllis Summers (Michelle Stafford). Abby says she believes that Phyllis likes Chance Chancellor (Donny Boaz) and she may have been the one responsible for sabotaging Abby and Chance’s date. Mariah is stunned to learn that Abby encouraged Chance to go out with Phyllis, then says it’s a great idea letting the snake eat itself. Their conversation then switches to Tessa and Tanner Watts (Chase Coleman), and Mariah reveals the two were once married. Mariah says she was angry, but doesn’t hate Tanner. She then glances in Theo’s direction. When Abby mentions that Kyle’s on a business trip with Summer, Mariah’s stunned, but then decides it’s not her business to interfere.

Lola brings Theo dinner, and he asks how she’s doing since Kyle and Summer are away on a business trip. She tells him about her and Kyle’s fight before he left, then says she trusts her husband. Theo then wonders if Kyle trusts Lola. Theo then says what happened in the kitchen the other day was his fault. Theo then calls Kyle entitled, and Theo talks about how he always felt like a visitor in Kyle’s world.

In San Francisco, Summer and Kyle arrive back at his suit after closing a successful deal. Kyle notices Summer’s lucky necklace and thanks her for her help. Summer says this calls for a celebration. Kyle sends Jack Abbott (Peter Bergman) a quick email, then fetches two beers for him and Summer. When Summer inquires if he’s messaged Lola, Kyle says that he hasn’t. Summer reveals that it’s officially over between her and Theo. Kyle’s glad to hear the news and says Summer deserves better.

Summer says she’s happy with the way things are in her life, then asks if Kyle’s happy. He says that he is, but Summer’s skeptical. She says that Kyle and Lola’s relationship moved way too quickly, and their problems may not be all about Theo. She says Kyle’s been trying too hard to change who he is, and she wants to see him back to his old happy self. Summer kisses Kyle. Afterward Kyle apologizes, then reminds Summer they’re just friends. Summer feels like an idiot for kissing him, but Kyle reassures her everything’s fine. She then leaves his room.

Young And The Restless Spoilers: Amanda Sinclair Ends Her Friendship With Billy Abbott

Amanda meets Billy at the dive bar and judging by his behavior, she assumes he told Victoria about them. Billy says that Victoria is his wife and the woman he’s supposed to share everything with, yet she doesn’t understand him. Amanda says Billy’s upset because Victoria didn’t react the way he wanted her to. He says Victoria wants him to get help. He then ponders why it’s easier to talk to Amanda than Victoria. He says Victoria won’t take his word that everything’s okay.

Amanda blames herself for Billy and Victoria’s problems, but he reassures her she’s not to blame. He reminds her they’re not having an affair, they’re only friends. Amanda responds that Billy doesn’t act like they’re friends. Amanda says she can’t talk to Billy anymore because she feels like she’s crossing a line in his and Victoria’s marriage. When Billy asks why she’s doing this, she says what they’re doing isn’t healthy. As Amanda’s leaving she and Billy wish each other good luck. Nearby, someone takes photos of Amanda and Billy together.

Nick stops by Victoria’s house, and when he asks where Billy is, she makes an excuse and says he’s out at the moment. The two start talking about Newman’s 50th anniversary celebration. Nick brings up his concerns about Victoria getting consumed with the company like their father Victor Newman (Eric Braeden) did. He then asks if things are okay between her and Billy. She then confides in Nick about how Billy wants to be restless and wants her to accept his behavior. Nick hugs her as she breaks down.

When Nick asks what Victoria plans to do, she says she doesn’t know what to do. She says it’s hard to do anything when someone’s addiction is doing the talking for them. Nick says Billy can only get help if he wants to do it. Victoria says that if Billy refuses to seek help, she’ll have not choice, but to walk away. Nick warns his sister not to let Billy drag her down too.