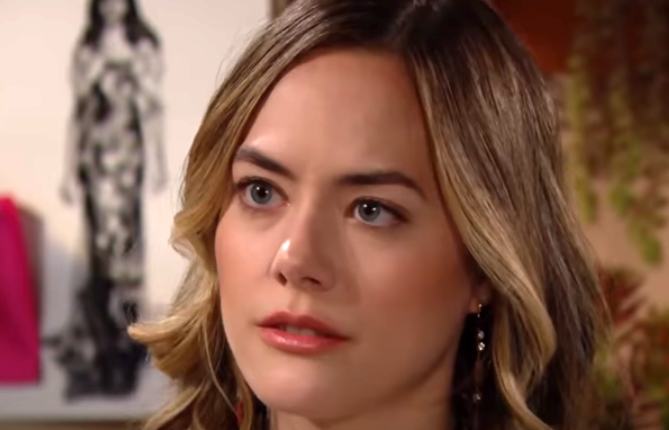 Hope Logan (Annika Noelle) needs time on ‘The Bold and the Beautiful’. Instead of agreeing to remarry Liam Spencer (Scott Clifton), who is her greatest love, she could choose to continue withholding her engagement response.

Liam is the father of her child, Beth Spencer (Madeline Valdez and River Davidson). But he’s also the man who’s asked her to relinquish legal control of Douglas Forrester (Henry Joseph Samiri). That request proved too much for Hope to digest.

Thomas Forrester (Matthew Atkinson) has been seen as obsessed with Hope since the mid-part of last year. He’s even admitted as much. However, after apparent contrition, Hope came to see him in a restored light. She’s still leery but is willing to give him a second, restricted chance.

Hope can’t be blamed for her feelings. She’s the one who had her first-born child stolen by Dr. Reese Buckingham (Wayne Brady) and is the lady who had to fend off Thomas’ relentless advances.

Being married to Liam was the life she had and the life she wanted. But the conditioned approach to his remarriage proposal was not respectful, or what anyone would consider being normal.

Asking Hope to cut ties with Thomas at Forrester Creations can be seen as justified. There are plenty of talented designers around the world, or even around the block from that fashion house. She doesn’t need to work with Thomas, but Douglas’ protection and the link Hope has to the boy who sparked the Beth reveal really isn’t Liam’s call.

The Bold and the Beautiful Spoilers: Thomas And Hope Hook Up – Liam No Longer In The Picture #BB #BoldandBeautiful https://t.co/GDyKV5JA4m

Hope has been criticized for being too generous. However, her maternal instincts, which now extend to Douglas, are spot on.

Caring for her realized daughter and Thomas’ son has become the focal point of Hope’s life. Yes, she heads Hope For The Future and considers the restart to her career to be important, but the children come first.

Being a devoted mother puts her at odds with Liam’s specific request, which is actually a demand, that Hope reestablishes a wall between herself and Thomas, which means rebuking the adoption agreement she just entered into.

The Bold And The Beautiful Spoilers – Liam Spencer Miscalculated

With whatever Liam was thinking, he didn’t anticipate Hope dumping him. Now that it’s happened, it’s also possible that she isn’t drawn back to Thomas.

Instead of remarrying Hope, Liam may have set in motion a series of events that allow her to remain single indefinitely. She doesn’t love Thomas and wouldn’t seem inclined to suddenly couple with him, or even to do so as the months’ pass. Standing on her own, with her children at her side, might be the option that Hope chooses, rather than following whatever advice Liam, or Thomas offer.