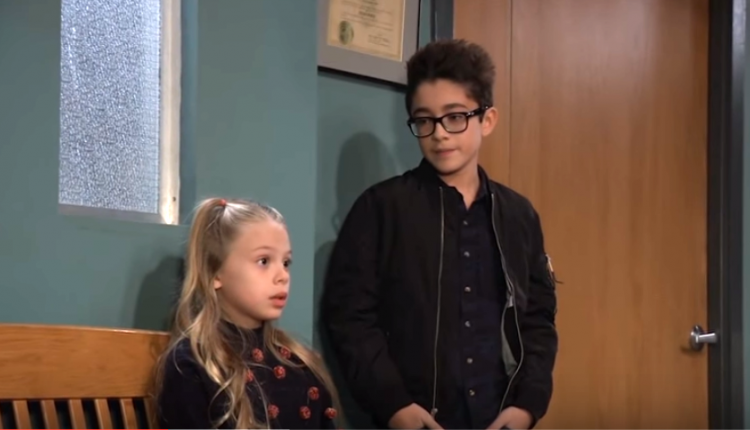 General Hospital spoilers reveal that a couple of kids from the younger set in Port Charles are not having a good day, let alone a Happy New Year.

Both Charlotte (Scarlett Fernandez) and Spencer (Nicolas Bechtel) have been confronted with some rather unpleasant news lately, specifically of the parental unit type.

While Miss Charlotte lost her dad to jail, Master Spencer got a shock when his father returned from the dead.

Neither are handling their respective situations well. What does all of this turmoil forebode for the near future, and what should be done about it?

General Hospital Spoilers – Are we looking at Charlotte Cassidine Scissorhands?

If things are allowed to continue on as they seem to be going, these two will be causing a ruckus for the adults in their lives, which means plenty of drama and trauma.

Who knew that Charlotte was such an artist? Of course, she is dealing with Valentin’s (James Patrick Stuart) latest upset, one that has seen him taken away from her day to day life. In his place, she has dueling moms, Nina (Cynthia Watford) and Lulu (Emme Rylan).

The tension between the two women is palpable and while adorable Charlotte is putting on a happy face, her actions speak otherwise!

Is she on a road to trouble and mayhem? She took a pair of scissors to a picture of uber-gorgeous Sasha (Sofia Mattsson) after the deceptive model had a run-in with Nina.

Under normal circumstances, this might not be a big deal, but who on a soap opera is normal?

For his part, Spencer has gained a dad, but the trauma is just as real as if Nikolas (Marcus Coloma) had stayed dead.

Of course, nothing prepares one for a parent returning to the land of the living, especially when said parent intentionally stayed hidden for years.

These are vital years in young Spencer’s life, and although he’s precocious he still needs guidance and love.

It was almost painful to watch him tear into Nikolas for abandoning him. Did anyone blame him?

What will Spencer do with his anger? His life has become even more complicated with the shooting of his beloved grandmother Laura (Genie Francis). Spencer is extremely gifted intellectually, and his family drama may set him on a dark path he can’t return from.

Spencer is a Cassadine after all! For that matter, so is Charlotte, although Valentin’s DNA has been called into question. Still, she seems to be taking after her father in the vengeance department.

At this point in time, the adults in their lives would be well advised to keep an eye on these two, at the very least. Can you imagine what will happen if they actually team up? In that case, heaven help Port Charles!