Days of Our Lives Spoilers: Princess Gina Has Murder On The Mind – John and Marlena Both in Grave Danger 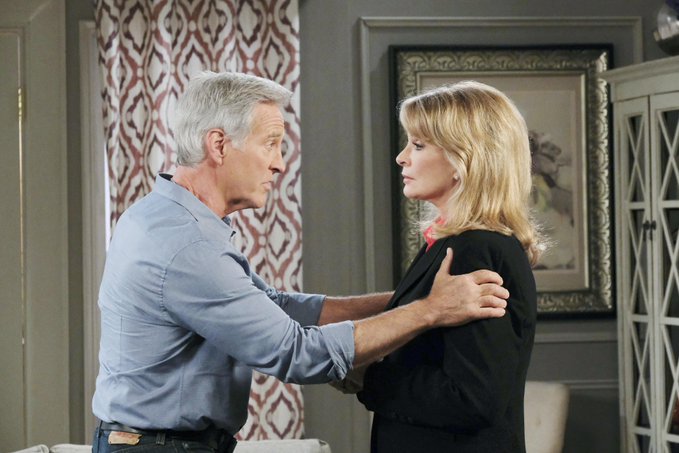 Days of Our Lives spoilers reveal the upcoming week will be full of intense action and shocking proclamations. Princess Gina (Kristian Alfonso) announces that Dr. Marlena Evans (Deidre Hall) must die and she has a gun. Meanwhile, John Black (Drake Hogestyn) is tied up and held hostage, believing that Marlena and his best friend, Steve “Patch” Johnson (Stephen Nichols) are both dead.

DOOL spoilers indicate that Marlena is going to be in real danger. The weekly promo shows her surprised face when the woman she thinks is Hope Brady reveals herself as not a friend, but an enemy. Gina has a gun pointed directly at her face and threatens to end her life. It is all because of Gina’s obsession with having John as her man. How is Marlena going to get out of this terrible situation? Can she be saved before it’s too late?

Days Of Our Lives Spoilers: Are Brady And Kristen Reuniting? Baby Brings Them Together Again https://t.co/2DEjLNTQhQ pic.twitter.com/iJnHjRaRCP

In another scene in the weekly promo, the narrator teases that a partner is left hanging. Dr. Rolf (William Utay) shoots Steve and John believes his partner and best friend is dead. However, it is just a ruse so they can gain power over John. In one scene, it is shown that John is left hanging, literally. It seems that he is in just as much trouble as his wife.

Days of Our Lives spoilers also reveal that Victor Kiriakis (John Aniston) will have some family members that turn into enemies. Will Horton (Chandler Massey) realizes that he is in prison because of Victor. Ciara Brady (Victoria Konefal) tells him that he is innocent and he isn’t responsible for Adrienne Kiriakis’ (Judi Evans) death.

During the one-year time jump, there were a lot of wrongs and injustices. Perhaps it is time that those wrongs were made right. However, what will be the cost and will any of the characters ever be the same after it is all said and done? Fans will have to keep watching the NBC soap opera to see how these storylines play out.