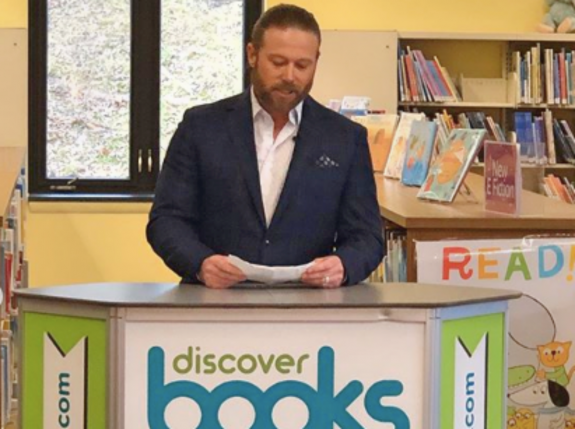 Known to many as Rick Forrester on “The Bold and the Beautiful,” Jacob Young travels to Maryland for a cause. On January 27, 2020, the actor is heading over to Elkton Public Library to read to children. Families with kids of all ages are invited to join to read learn to start at 11 am. Once done, free books will be handed out to all the kids who have attended.

Young is extremely happy to be part of such an occasion.

“I cannot tell you how incredibly proud I am to align with such a wonderful cause!” he said.

“We are honored and excited to receive a generous donation from Discover Books,” he added.

Young is only one of the many people who are doing what they can to help fight illiteracy. Even the soap industry, has addressed this topic including “The Young and the Restless” and “As The World Turns.”

He may no longer be in “The Bold and the Beautiful,” but that doesn’t mean he’s taking it easy. The actor is keeping himself busy with other exciting projects.

Such a great day with @discoverbooks ! My team at DiscoverBooks donated 1000 children’s books to Cecil County Public Library! Thank you to @mayorrobalt and the town of Elkton, Md for officially naming today January 27, Discoverbooks Day! Thank you to all who came to celebrate! Thank you to our CEO Gary Broache and our CFO Dave Reymann @cecillibrary @tyhincy @shannon_davis_woods #letthestoriesliveon

The actor shared a quick preview of his music view on Instagram. His post captioned, “Are you Lovin’ It? Do you want to see more? Special thanks to @thestevefreeman for producing and directing. #lovinit.”

This isn’t his first foray into the music industry. He’s already showcased his talent in singing back in 2001 when he released his first CD titled Jacob Young. He also joined the musical theatre when he appeared as Lumiere in “Beauty and the Beast.”

The Bold and the Beautiful Spoilers – Young’s Acting Career

Apart from playing Rick Forrester on “The Bold and the Beautiful” from 1997 to 1999, he also took on the role of Lucky Spencer on “General Hospital” and “JR Chandler on “All My Children.” In 2001, he was dubbed as the “Sexiest Soap Star” by People Magazine.

He received several Daytime Emmy Awards nominations for his role on “The Bold and the Beautiful,” “General Hospital,” and “All My Children” from 1999 to 2016. But he managed to take home the trophy in 2002 when he won the Outstanding Younger Actor in a Drama Series category for his impeccable performance as Lucky Spencer on “General Hospital.”

Needless to say, The Bold and the Beautiful fans will have to tune in to find out what will happen next!