The Bold and the Beautiful Spoilers: Brooke’s Not Looking Back In Anger – Ridge Lost His Chance 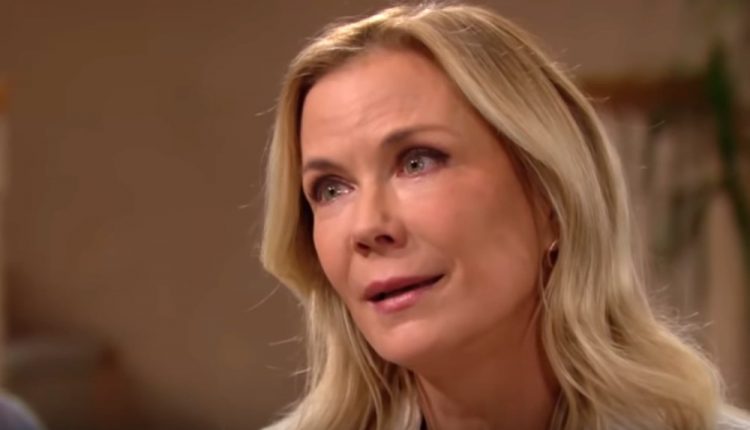 The Bold and the Beautiful spoilers tease that Brooke Logan (Katherine Kelly Lang) appears past the point of no return. She’s pressured her husband to choose between Bridge and his son, slapped Shauna Fulton’s (Denise Richards) face for a second time, renewed battle with Quinn Forrester (Rena Sofer), and has told Eric Forrester (John McCook) to end his marriage, among other plot points.

Meanwhile, Ridge Forrester (Thorsten Kaye) perceives progress in some areas of his life. He sees Thomas Forrester (Matthew Atkinson) as trying to redeem himself. Ridge also recently told Shauna that their friendship has to end and advised his wife that Shidge wouldn’t happen.

The Bold And The Beautiful Spoilers – Brooke Logan Pushed Into Corner

Brooke wasn’t particularly looking for any of these fights. She sensed that Thomas was off when he returned from New York with his son, Douglas Forrester (Henry Joseph Samiri) last year. Atkinson’s character not only fixated on Hope Logan (Annika Noelle), he withheld information about her daughter and Brooke’s granddaughter being alive in order to create Thope.

Eventually, Brooke felt compelled to issue an ultimatum to Ridge. She would no longer condone his son’s behavior and if he did, then divorce was necessary.

Lang’s character came to despise Flo Fulton (Katrina Bowden) for the role she played in the Beth Spencer (Madeline Valdez and River Davidson) debacle. That played into Brooke’s feelings for Shauna, who was obviously interested in Ridge. Considering Quinn’s friendship with Shauna, it’s natural that Brooke then asked Eric to oust both characters from his life.

The Bold and the Beautiful Spoilers: Quinn Goes To The Dark Side After Another Showdown With Brooke #bb #boldandbeautiful https://t.co/dzpAttBnoQ

Hope was stunned to see Liam Spencer (Scott Clifton) kissing Steffy Forrester (Jacqueline MacInnes Wood) the morning after he proposed Lope’s remarriage. One consequence of that development is that Hope sees Thomas in a softer light, which disturbs Brooke.

It now appears, falsely, that Thomas is making progress. Hope and Ridge don’t know that Thomas orchestrated the cliff house backyard kiss, making Brooke seem all the more wrong in her stance.

The Bold And The Beautiful Spoilers – Growing List Of Connected Enemies

Brooke’s problems lie not only in her disagreements with Ridge, but with her growing list of connected enemies. Thomas, Quinn, and Shauna all want Bridge to fall.

The Logan, Forrester, Spencer, and Fulton clans have clashed in recent months. With more battles to be held, it’s hard to imagine, though not impossible to believe, that Brooke will either win, or lose them all. But where will any outcomes leave her and Ridge by then?