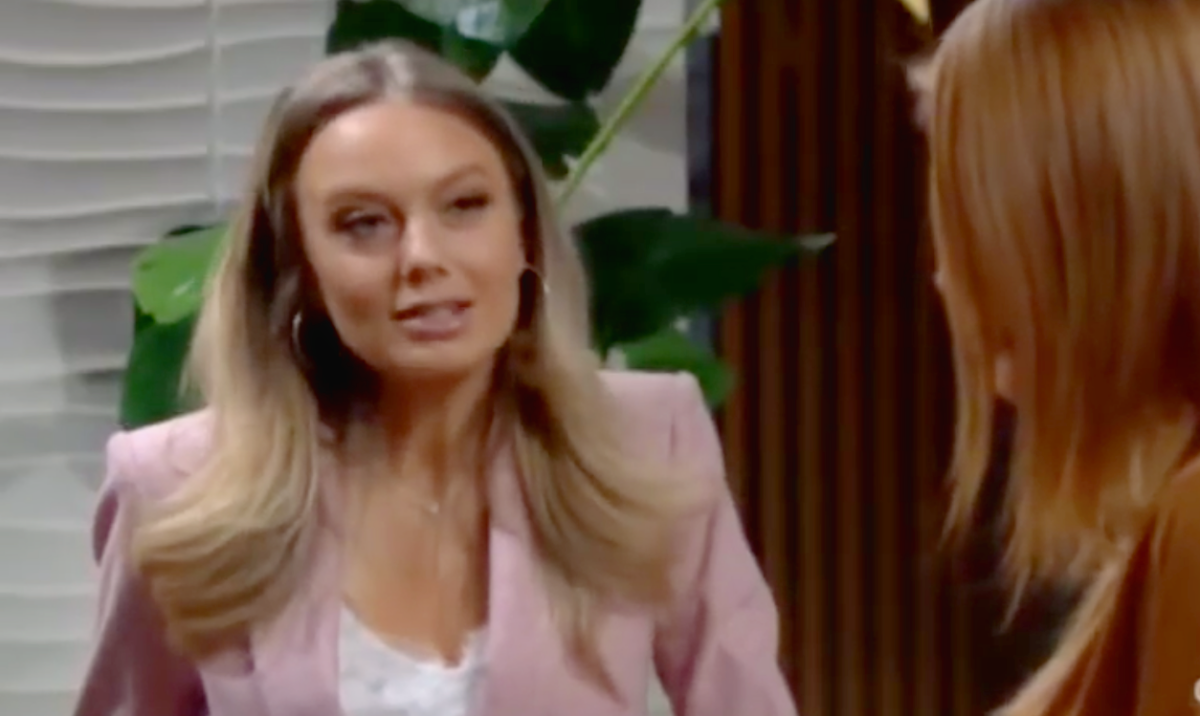 The Young and the Restless (Y&R) spoilers for Tuesday, January 28, tease that Mariah Copeland (Camryn Grimes) will visit with Sharon Newman (Sharon Case) at her home as she’s going through cancer paperwork. Mariah will offer to take off some of the pressure and tend to the running of Crimson Lights, but Sharon will kindly refuse. Rather, she’s going to close the coffeehouse for a while to refresh it.

Mariah will then suggest that Sharon consider using one of Nick Newman’s (Joshua Morrow) contractors for the job, but Sharon will say that if you ask Nick for a sip of water, you get a fire hydrant.

Next on Y&R, at the Newman ranch, Nick will visit with Nikki Newman (Melody Thomas Scott), who will wonder why he’s spending so much time with Sharon these days. Nick will say it’s because of Faith Newman (Alyvia Alyn Lind). Talk will turn to the Newman anniversary party, and Nikki will share her plans to go to Europe, which will have something to do with the planning of the party.

Nick will then offer to help with planning the anniversary party, and Nikki will remark that it will give him less time to spend with Sharon. Nick will remind her that Sharon is dating Rey Rosales (Jordi Vilasuso) and Nikki will say that she’ll drop it for now.

Next on Y&R, at the Grand Phoenix, Phyllis Summers (Michelle Stafford) and Abby Newman (Melissa Ordway) will banter about how Phyllis managed to get a date with Chance Chancellor (Donny Boaz). Phyllis will leave and Chance will approach, with Abby still encouraging him to go on his date with her.

Soon, Phyllis will return in a skimpy robe, saying that there’s no water in her room and she’ll suggest that Chance return to her room with her, but he’ll decline and step aside. Abby and Phyllis will banter some more, then Phyllis will overhear Chance’s phone call – something about the missing target. As they talk about that, Abby will note their chemistry and be unnerved.

Next on Y&R, at Jabot, Summer Newman (Hunter King) will chat with Theo Vanderway (Tyler Johnson), who will push her for details about her business trip with Kyle Abbott (Michael Mealor). They’ll push each other’s buttons, and Summer will again accuse him of being too into Lola Abbott (Sasha Calle). Ultimately, Theo will come onto Summer, and she’ll shoot him down.

Meanwhile, Kyle will see Lola at Society, and he’ll tell her about how successful his trip was with the new acquisition. Lola will wonder why he hasn’t mentioned Summer, and she’ll mention the troubles they were having before he left for the trip. He’ll ask her to get away so they can talk, but she’ll get interrupted by a phone call from Arturo Rosales (Jason Canela) who will relay that Celeste Rosales (Eva LaRue) was in a car accident and broke her ankle.

Next on Y&R, Nick will show up at Sharon’s house wanting to talk about some cancer specialists that he researched. She’ll say that she’s thankful for what he’s done, but that she’s happy with the doctors she’s got. Once he goes, Sharon will remark to Mariah about how she feels constantly attended to.

Later, Nick will meet with Mariah at Society, and Mariah will mention that she was considering moving in with Sharon, but that she realized that she’d just be a nuisance. Plus, Sharon doesn’t want to be viewed as a victim and that they all need to give her space. Nick will realize that perhaps he had gone too far earlier. Mariah will say that she’ll keep him in line.

Theo Vanderway Eavesdrops & Learns That Something Happened In San Francisco

Back at Jabot, Summer will find Kyle and wonder why he’s not with Lola. He’ll explain that something interrupted them and that they’re going to talk later. Summer will wonder if Kyle is going to tell her that they kissed in San Francisco. Kyle will say that he just wants his marriage back on track.

Unbeknownst to Summer and Kyle, Theo will be eavesdropping outside the door, and he’ll hear Kyle say that it’s for the best if they just forget what happened on their trip. Finally, on Tuesday’s new episode of Y&R, Summer will say that they shouldn’t ever talk about it again, as Theo listens intently.