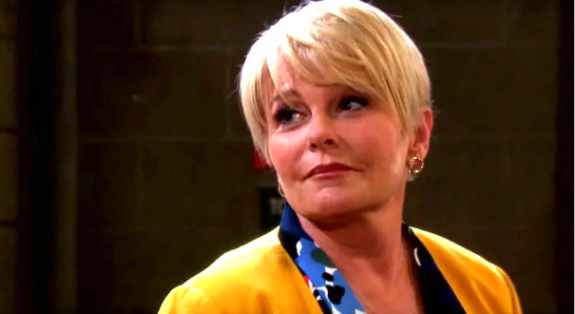 Days of Our Lives spoilers reveal Judi Evans will be returning to the NBC soap opera. Many fans assume it will be as Bonnie Lockhart since Adrienne Kiriakis is dead. However, there are aspects of Adrienne’s death that still haven’t been explained. Here are a few theories on what to expect depending on which character makes an appearance.

Days of Our Lives Spoilers – Bonnie Lockhart Could Return

DOOL spoilers indicate that Evans could come back as Bonnie Lockhart. The troublemaking Salemite hasn’t been seen in quite a while so her return is possible. What could her storyline be about and would her daughter, Mimi Lockhart (formerly Farah Fath) also come back?

Head writer Ron Carlivati loves doppelgangers, masks, and twins and we haven’t seen any of those elements in some time so it seems we are a bit overdue for one.

Carlivati teased that we would have a week of flashbacks and Adrienne’s death would be featured. We learned that she was involved in a car accident and Will Horton (Chandler Massey) was in prison for her death. However, Will just learned that he actually isn’t the person responsible. As for how he will get out of prison, that remains to be seen.

Days of Our Lives Spoilers: How Will 'Stefano' React to Princess Gina's Plans to Murder Marlena? https://t.co/eyEge1aRpz

Days of Our Lives Spoilers – Not All Mysteries Have Been Explained

Days of Our Lives spoilers indicate that there are still a few mysteries surrounding Adrienne’s death. Carlivati said that fans will think they have everything figured out but there would be one or two more mysteries that will be unfolded later. It is possible that this is regarding Adrienne’s death and we could see another flashback scene.

One other theory regarding Judi Evans’ return is that she might come back as an entirely new character. What would be interesting is how Justin Kiriakis (Wally Kurth) would see a woman walking around Salem that looked exactly like his dead wife. How would it impact his current romance with Dr. Kayla Brady (Mary Beth Evans)? Fans will have to keep watching the NBC soap opera to find out how what writers have planned.