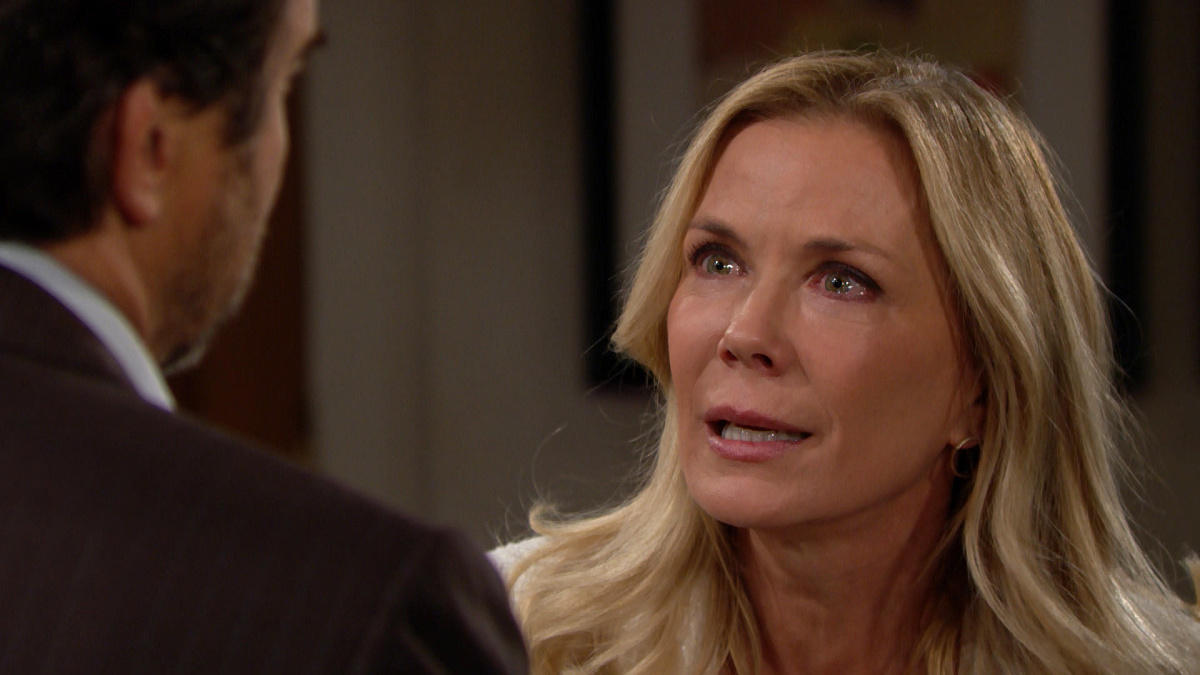 The Bold and the Beautiful spoilers tease that Eric Forrester’s (John McCook) reference to Brooke Logan’s (Katherine Kelly Lang) past battles with alcohol is ominous. Sharp soap viewers know that a focused camera shot of Brooke putting down a glass of what appeared to be clear liquid was likely meant as a linked teaser.

Brooke has endured a lot in the recent past. She stood by Hope Logan (Annika Noelle) throughout the entire Beth Spencer (Madeline Valdez and River Davidson) debacle, faced increasing threats from Thomas Forrester (Matthew Atkinson) along the way, which persist, is fighting to save her marriage, and has entered into a skirmish with Quinn Forrester (Rena Sofer) that partially relates to Shauna Fulton (Denise Richards) and has no seeming endpoint.

The Bold and the Beautiful Spoilers: Is There A Negative Effect Playing Douglas Forrester Has On Henry Joseph Samiri – Matthew Atkinson Speaks Out

Bold And The Beautiful Spoilers – Ridge Forrester Is A Rock

Eric pointed out to his wife that Brooke isn’t herself when she’s away from Ridge Forrester (Thorsten Kaye). Kaye’s character is Brooke’s rock, which Eric recognizes. That’s why he wants to do all he can to support the reconciliation efforts that are being made.

Subtracting Shauna from the equation wasn’t something that Quinn took kindly to. But Richards’ character was okay with it, telling her friend that she shouldn’t further any tension with Eric.

Richards is going to be away from the cast for a bit. So a break between Ridge and Shauna appears to have been planned. Whether that friendship is revisited when the actor returns will depend on where Bridge is at by then.

Ridge never filed the divorce papers that he and Brooke signed. She was relieved to learn that information, which also offers hope.

Brooke’s passioned insistence that Eric kick Shauna off his property was a reasonable request that created results. However, asking him to take down Quinn’s portrait and to divorce his wife were clear warning signs that Brooke is overwhelmed, as those demands were unreasonable.

In the past, during some periods of conflict, Brooke took to the bottle. No one wants to see that happen again. Although it would be fair to wonder if Quinn and Thomas agree?

The Bold and the Beautiful Spoilers: Does Wyatt Have a Right to Pry in Sally’s Personal Life? Fans Debate on Messy Situation https://t.co/BBdro4yPzX pic.twitter.com/xkgnBQc6zj

Ridge took a positive step when he told Shauna that their friendship couldn’t continue because they weren’t acting appropriately. Richards’ character was disappointed, but understood and, as noted above, has moved out of Eric’s guest house.

Along with his dad’s support, factors are in place to further a Bridge revival. However, the sticking point of Ridge’s son remains.

Thomas is determined to get Brooke out of the Forrester family. Quinn has now pledged to do the same. Thomas and Quinn compared notes and agreed on their common enemy in the past. With that Brooke’s troubles seem far from over, which could create a new alcohol-based storyline. Here’s hoping that can be avoided.