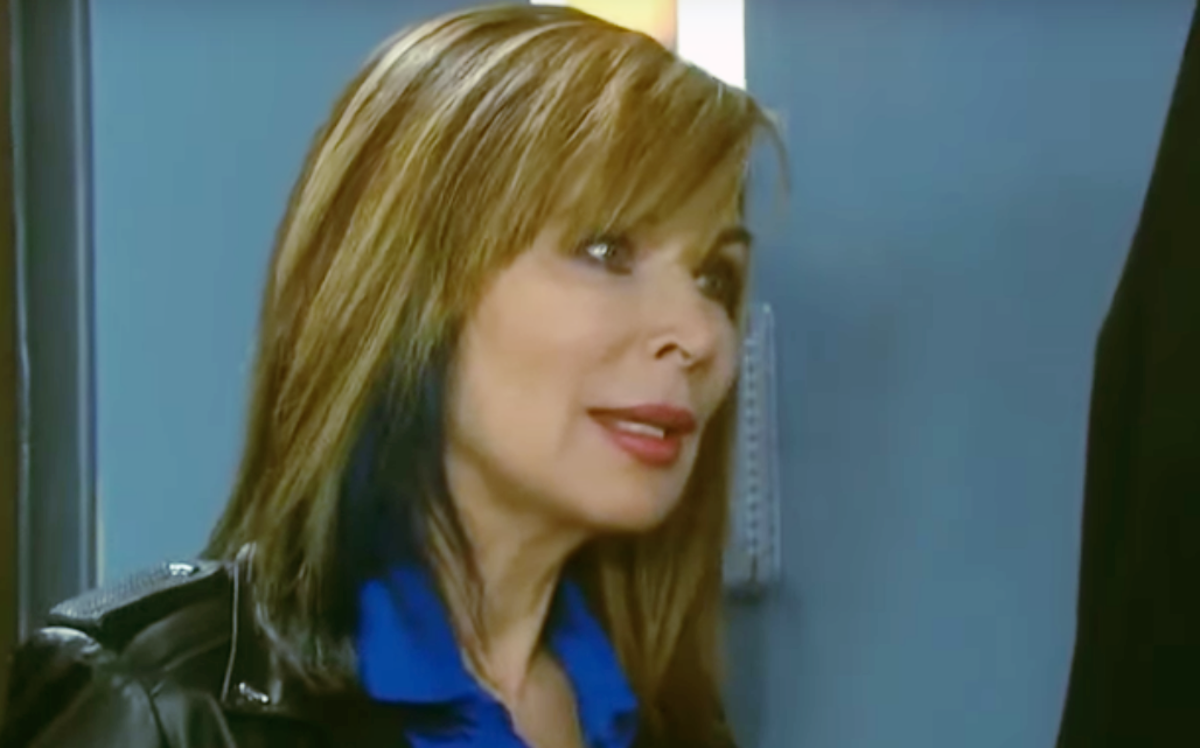 Days of Our Lives (DOOL) spoilers for Thursday, January 30, tease that “Steve Johnson” aka Stefano DiMera (Stephen Nichols) will offer an explanation to John Black (Drake Hogestyn). He’ll try to stay cool under pressure since John just confronted him with Stefano’s ring. “Steve” will insist that Kate Roberts (Lauren Koslow) provided the ring before they left Salem, so he thought they could use it as Stefano bait.

John may think that sounds strange, but “Steve” will contend that this ring is a significant part of who Stefano is. He’ll argue that it might be useful as they work to lure him into a trap, but it’s John who’ll actually be lured into one. Days of Our Lives spoilers say Dr. Wilhelm Rolf (William Utay) will help Stefano carry out the next phase of his scheme.

“Steve” will put on quite a show when Dr. Rolf “shoots” him in Thursday’s episode. His plan will be to “die” in front of John and leave him more vulnerable for Princess Gina Von Amberg aka “Hope Brady” (Kristian Alfonso). After this “murder” plot is finished, John will be knocked out cold and taken back to Salem. He’ll end up chained and left dangling from the ceiling, so he’ll definitely be in a tight spot!

Marlena Evans (Deidre Hall) will land in a tight spot of her own thanks to “Hope.” Based on DOOL’s weekly promo, it appears Marlena will be held at gunpoint by Princess Gina. She’ll ultimately be taken to an undisclosed location, where she’ll be tied up and held until “Steve” can come on the scene.

Days Of Our Lives Spoilers: Kate Roberts Will Have A Confession To Make

Other Days of Our Lives spoilers say Kate will have a confession to make. Guilt will drive her to it on Thursday, but who will hear it? Chad DiMera (Billy Flynn) has been sharing his suspicions about Kristen DiMera’s (Stacy Haiduk) meeting with Stefano – and Kate has a pretty close bond with him. She may be tempted to spill at least part of what she knows about Stefano, but it’s doubtful Chad will hear the whole story.

Of course, someone like Shawn Brady (Brandon Beemer) could certainly use a confession from Kate. No matter how much Kate divulges or who she shares it with, you can bet her admission will bring drama! Days fans won’t want to miss what happens next in this hot plot.

It sounds like Thursday’s episode will be packed full of action, so stay tuned. We’ll give you updates as other Days news and rumors emerge. Stick with DOOL and don’t forget to check back often for the latest Days of Our Lives spoilers, rumors, updates and news.