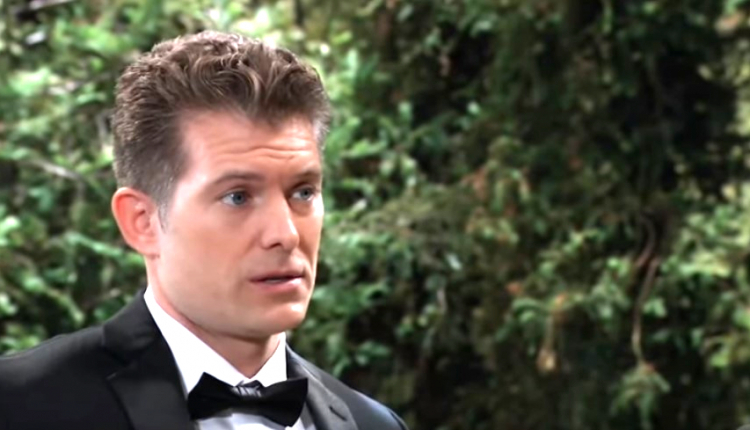 General Hospital spoilers tease that Dustin Phillips (Mark Lawson) may have some law enforcement background that will help him take down the gunman who tried to kill Michael Corinthos (Chad Duell) and shoots Mayor Laura Collins (Genie Francis) in the next regularly scheduled two episodes GH! Some of you have seen the episodes in Canada on On-Demand or on Daily Motion. Dustin is the hero who runs off the gunman in the second of the two episodes.

This is the scenario; Michael and Josslyn Jacks (Eden McCoy) talk about Michael moving Nelle Benson Archer (Chloe Lanier) into the Quartermaine mansion so he can keep a closer eye on her. He will actually set her up in the boathouse, separate from the mansion itself but this may be an afterthought following the conversation with Joss, who opens her mouth and their mother Carly Corinthos (Laura Wright) comes out! Joss worries that Nelle will kill Michael at the first opportunity but he explains he knows what he is doing.

Finally, he gets her calmed down, and Joss leaves the pier. Later, Sasha Gilmore (Sofia Mattson) and Laura show up to join Michael as Laura wants to talk to him about ELQ funding her new pet project, the revitalization of the waterfront, which of course will include some of Sonny Corinthos’ (Maurice Benard) “turf” since it includes the Corinthos Coffee warehouse. Joss returns, who had forgotten her diary which she left there, and suddenly she spots a gunman with his gun trained on Michael, and shouts at him to get down!

They all duck, but when the gunfire ceases for a moment as the gunman is probably reloading, Laura stands up and is shot, with a serious wound to her stomach. All of a sudden, Dustin shows up out of nowhere, knocks the gunman down with a pallet, kicks the gun away from him, and although he isn’t able to catch him, at least he scares him away and the gun is left on the pier for the police to use as evidence! Then the police and ambulance arrive and Laura is taken to GH.

It is the kicking of the gun away from the perpetrator that gives us our clue that Dustin may have been in law enforcement! Jason Morgan, (Steve Burton) too uses this technique but we can be fairly confident that Dustin has not been a mob enforcer in his past but he has definitely had some kind of law enforcement training, and he could have been either in the Coast Guard or possibly even a Navy Seal with all of these surprise skill sets that a high school English teacher would normally not have.

Sure, Dustin could have taken a lifesaving course and possibly have been a swim teacher or coach sometime in his teaching career, but no teacher’s degree includes a course in taking down a criminal perpetrator and kicking his gun away from him! When Dustin made his statement to the police, he apologized that he wasn’t able to catch him, and that sounds a lot more like a cop or a former secret agent than it does a high school teacher!

His quick response of rushing to the pier when he heard gunfire, and his verbiage of “going to investigate” also indicates some kind of a law enforcement background!