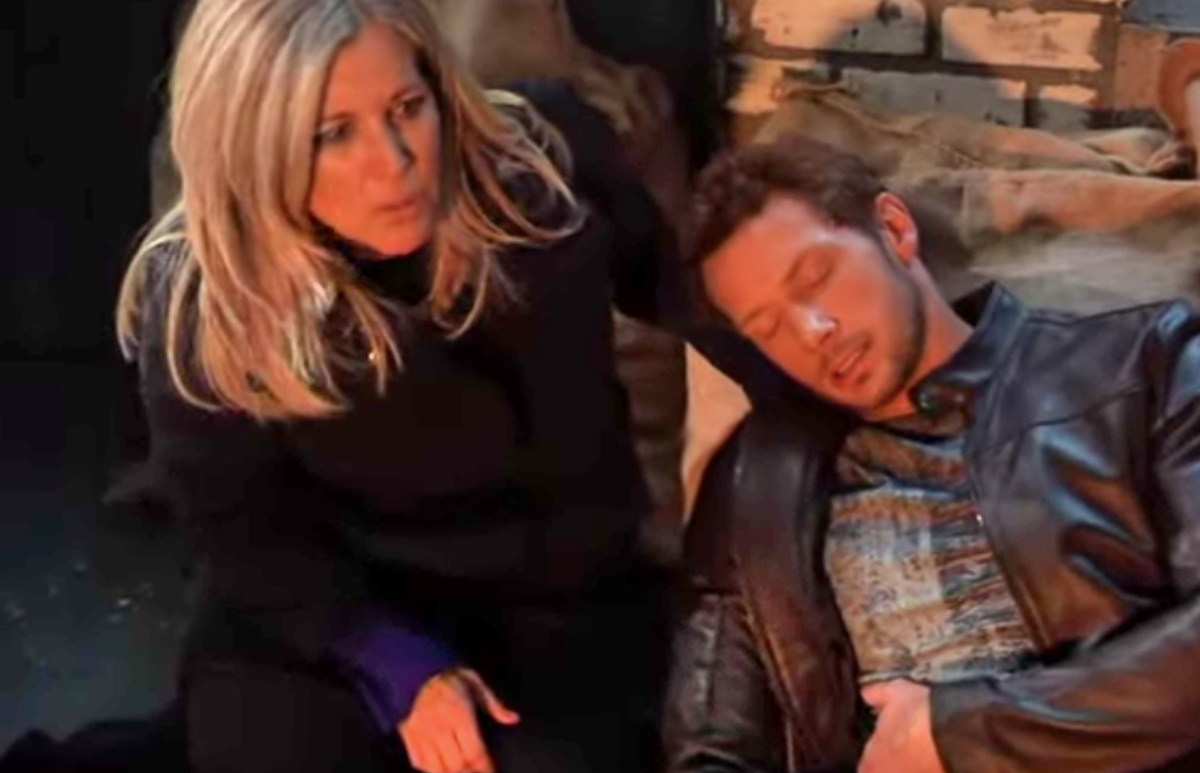 Nina has never thought of Jax as her boss anyway. Ava Jerome (Maura West) interrupts when she stops by to check on Nina. Jax and Nina explain to Ava that they are celebrating Crimson’s success. Ava is glad that Jax helped Nikolas Cassadine (Marcus Coloma). Jax gets a call from Jocelyn Jacks (Eden McCoy) about the shooting and he leaves.

Nina wonders what is wrong with Jocelyn that Jax had to leave so fast. Ava is proud of Nina taking charge of things. Nina wonders why Ava is there. Ava wanted to see how Nina was doing after the wedding. Nina and Ava agree that they have extended an olive branch. Nina and Ava start to go for a drink when Valentin Cassadine (James Patrick Stuart) interrupts. Nina orders Valentine to leave, she wants nothing to do with him.

General Hospital’s Nik comes to the hospital to speak to Liz Baldwin (Rebecca Herbst) but is instead confronted by Kevin Collins (Jon Lindstrom) over hurting his family. Nik tries to defend himself but Kevin doesn’t think that will help him. Liz speaks with Hamilton Finn (Michael Easton) about Hayden Barnes (Rebecca Budig) but Finn doesn’t tell her Nik’s part in Hayden’s disappearance.

Kevin tells Nik love will eventually find the way back. Finn tells Liz about the attack staged to get Hayden to leave. Liz believes Valentin was behind the attack but Finn knows it was Nik. Nik claims to be sorry to hear that Hayden hasn’t been in touch. Epiphany Johnson (Sonya Eddy) tells everyone that Laura Webber (Genie Frances) is being brought into the hospital.

Laura arrives at the hospital, Kevin asks Jordan what happened. Finn tells Nik that Liz needs to know the truth about the role he played in Hayden leaving town. Laura is taken into surgery.

General Hospital’s Mike Corbin (Max Gail), Sonny Corinthos (Maurice Benard), and Jason Morgan (Steve Burton) are under attack in the diner in Brooklyn. Jason tells everyone to get down when he sees the gun. Mike is very upset when the shooting starts and reverts back to childhood.

Mike is afraid he is going to get in trouble for not being home on time. Sonny tries to calm Mike as Jason is taken to the police station for questioning. The waitress explains that Jason, Sonny, and Mike were not causing any trouble.

The waitress says she was about to be kidnapped by the shooter and Jason saved her life. Sonny is released and decides he needs to go back to Port Charles. Mike’s doctor calls and Sonny explains they have a family emergency. Sonny is told that Mike can’t participate in the trial since he can’t make his appointment

General Hospital’s At the warehouse Brando Corbin (Johnny Wactor) comes out and saves Carly Corinthos (Laura Wright) but gets shot in the process. Carly tries to stop the bleeding but cannot get to the first aid kit. Brando is afraid Carly will get shot if she tries to reach it and orders her to stay down.

The new warehouse manager comes out and helps the two of them by putting an end to the gunfire. The manager captures one of the shooters and holds him for Sonny to question when he gets back to Port Charles. Gladys Corbin (Bonnie Burroughs) comes out and sees the man lying on the ground and says, Brando

Jocelyn calls the cops and tells them about the shooting on the pier. Michael realizes that Laura has been shot. Jocelyn explains that Laura was shot and tells them they need an ambulance. Sasha Gilmore (Sofia Mattsson) helps with Laura. Dustin Phillips (Mark Lawson) chases off the shooter.

Jocelyn thanks Dustin for saving them. Harrison Chase (Josh Swickard) arrives and questions Jocelyn. Chase moves on to question Michael as well. Michael tells Chase that he cannot get in touch with his dad or Jason. Chase tells Michael about the shootout in Brooklyn.

Chase tells Michael they need to let the cops handle this instead of retaliating against the shooters. Dustin goes to the hospital. Jordan questions Dustin who says the shooter was trying to hit Michael. Lulu Spencer comes to the hospital and asks about Laura.

Jordan comes to the warehouse and asked what happened. Carly explains that Brando helped her. Chase continues to question Michael until Sasha stops him. Sasha tells Chase that Michael is his friend and he needs to back off. Laura asks for Kevin and speaks to him before going into surgery.

General Hospital’s Jordan Ashford (Briana Nicole Henry) speaks to Valentin Cassadine (James Patrick Stuart). Jordan gets a call about the shooting. Jordan learns Laura has been shot and heads to the hospital. Jordan later goes to the coffee warehouse and pulls a gun on Gladys as she walks out of the building.