General Hospital Spoilers: Tracy And Ned Disagree On Whether Michael Should Remain CEO Of ELQ 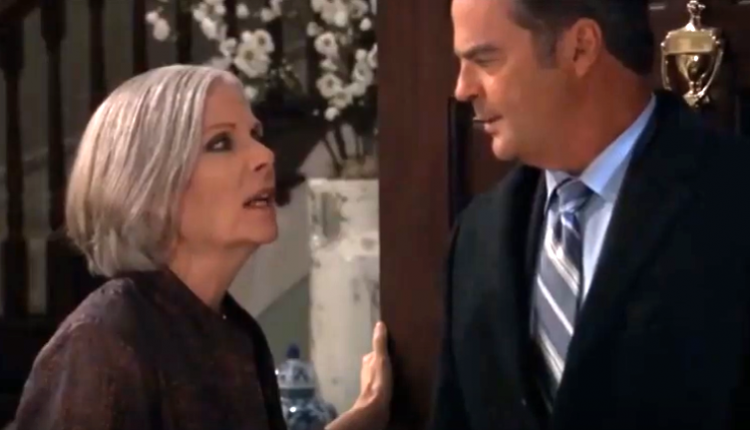 General Hospital spoilers tease that Tracy and Ned Quartermaine (Jane Elliot, Wally Kurth) will disagree on whether Michael Corinthos (Chad Duell) should remain CEO of ELQ or not in an upcoming episode of GH!

Tracy will argue that Michael showed very poor judgment in moving Nelle Benson Archer, (Chloe Lanier) on to the Quartermaine property, referring to her as his “felon ex-lover”. Ned will stick up for Michael at least at first, arguing with his mother that one thing doesn’t have anything to do with the other.

Michael will offer repeated reassurances that he has the situation well in hand and under his control, although he admits Nelle herself isn’t under anyone’s control, and that includes his own. His intent was to “keep his enemy closer” so that he could keep an eye on her and on what she is up to, and hopefully be able to forecast any untoward moves she may be thinking of making and stop her dead in her tracks before she has a chance to!

However, even Ned knows that one person cannot control another unless there’s the barrel of a gun pointed in their face, and he doesn’t want it to come to that!

Ned, unfortunately, realizes that his mother Tracy is right – if Michael has shown such poor judgment in his handling of Nelle and her release from Pentonville, even if it was to protect Wiley Cooper-Jones (Erik and Theodore Olson) from her, who’s to say that his judgment won’t be clouded in making decisions in ELQ business as the CEO of ELQ, even if he thinks that he can be objective and not bring personal matters into company business or not have them affect his decisions?

Michael tries to leverage Nelle by buying her shares to get rid of her and get her to leave, but she’s not budging! And, apparently, Nelle does not have restrictions to her parole like Sam McCall (Kelly Monaco) has to hers, and doesn’t even have to stay away from people with felony records – even Michael has a felony in his past, from when he killed Claudia Zacchara (Sarah Brown) with an axe handle protecting Josslyn Jacks (Eden McCoy) from her, who was a baby at the time. Felony manslaughter is still a felony, and if Nelle had a restriction like Sam does, then she’d be in violation and he could push for her to be re-incarcerated.

Tracy really isn’t even a voting member of the ELQ board of directors although she holds Dillon Quartermaine’s (Robert Palmer Watkins) proxy, however, Tracy being Tracy she will involve herself, along with Ned, in discussions with Michael about his fitness to continue to lead ELQ as its CEO. Even then, Quartermaines being Quartermaines, Ned and Tracy will likely still continue to disagree on many aspects of how to handle the situation and if someone should take over Michael’s position, who it should be, and on and on and on!