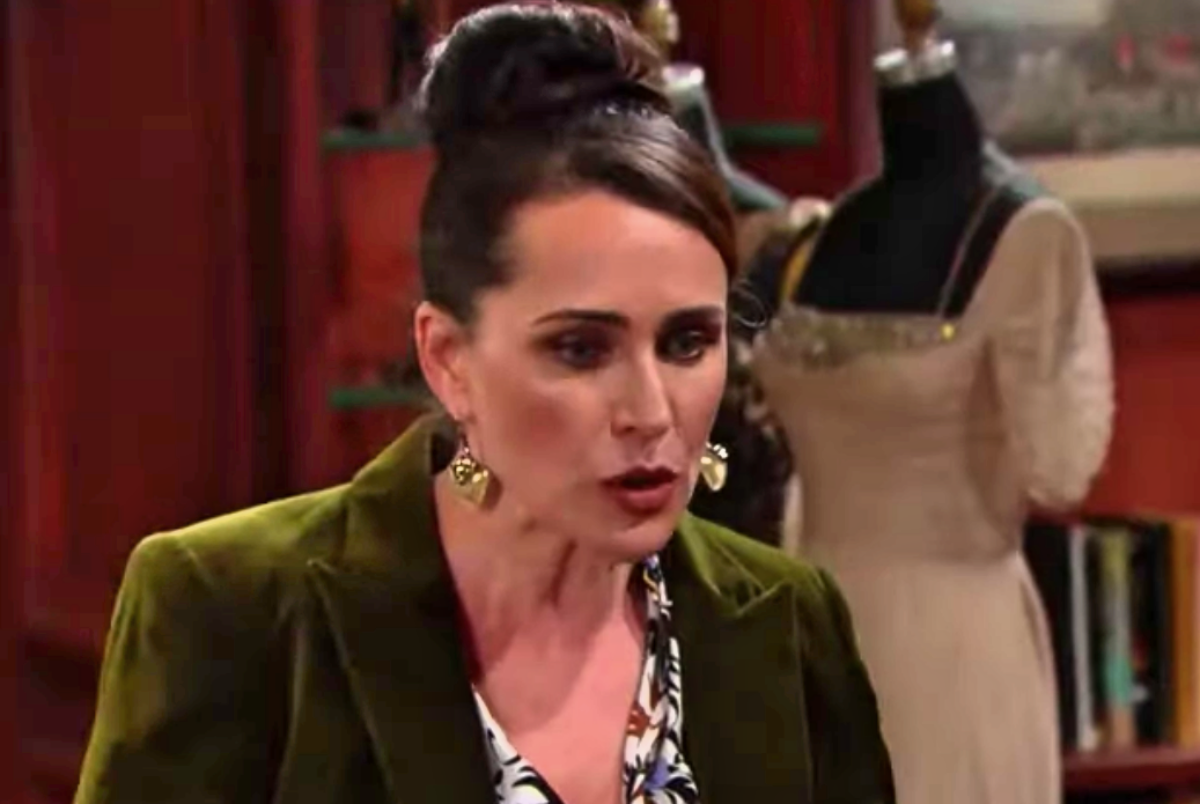 The Bold and the Beautiful spoilers for Friday, January 31, tease that Brooke Forrester (Katherine Kelly Lang) and Quinn Forrester (Rena Sofer) will have an epic showdown. As B&B viewers know, Brooke recently declared war on Quinn, saying that she wanted Quinn out of the Forrester mansion and out of Eric Forrester’s (John McCook) life for good.

Well, Brooke got her way on the issue of Shauna Fulton (Denise Richards) having to leave the mansion, but Eric has flatly refused Brooke’s demand that he divorce Quinn and send her back to the desert. That’s left Brooke frustrated, and now she’s on the scene at the Forrester mansion, duking it out with Quinn once again.

Brooke has been ranting at Quinn, calling her names and saying that she’s beneath Eric. It’s really been quite a scene, with Brooke fuming about Quinn’s portrait being up in the living room. Quinn, though, has basically held it together and calmly told Brooke that she shouldn’t try to dictate what goes on in their home, and that she was going to attack back if Brooke kept on at this rate.

The Bold and the Beautiful spoilers say that both Quinn and Brooke will lay claim to the Forrester family, so it looks like things will continue to heat up between them. Brooke just can’t stand it that Quinn considers herself to be the “matriarch” of the Forrester family, and in many ways, she acts jealous of her position as Eric’s wife.

Interestingly, Quinn seems to have gotten an idea in her head about that orange juice bottle that Brooke has with her. B&B viewers have seen Brooke sip from the bottle several times, while Brooke’s past alcohol abuse has come up in conversation repeatedly on the show. Might Quinn actually pour some liquor into the orange juice when Brooke’s back is turned?

B&B viewers will have to tune in to the next episode to see how it all plays out, but it’s certainly looking like Quinn is going to lace Brooke’s orange juice with vodka. And if that happens, then Brooke could really wind up in a bad place…which is just what Quinn wants!

Meanwhile, Katie Logan (Heather Tom) will lend an ear to Wyatt Spencer (Darin Brooks). As B&B viewers know, Wyatt has been feeling exceedingly guilty about his recent breakup attempt with Sally Spectra (Courtney Hope). He tried to break off their engagement, saying that he wanted to reunite with Flo Fulton (Katrina Bowden), but Sally essentially refused the breakup.

This leaves Wyatt on uncertain ground, as he wants to move forward with Flo but doesn’t want to devastate Sally. Wyatt has been really worried about Sally, since she just hasn’t seemed like herself lately. And B&B viewers know that’s because Sally is dealing with the possibility that there could be something very wrong with her from a medical standpoint. She’s been dizzy, trembling, and nearly fainting, and it just doesn’t look good.

But of course, Wyatt doesn’t know about Sally’s medical symptoms. She’s pretty much kept them under wraps, and he just thinks that she’s been extremely stressed lately with work. He’ll tell Katie about all of this and get her take on the matter. It looks like he’ll lament about being in the middle of two women and about his deep concern for Sally.

According to B&B spoilers, Katie will offer Wyatt some understanding and advice. She’ll probably reassure him that Sally is a survivor, and that while a breakup will be hard for her, she’ll get through it and will get back on her feet quickly. Of course, Katie won’t know about Sally’s pending health problems either, but ongoing B&B spoilers say that she’ll soon find out from Sally herself, and that she’ll offer Sally support and comfort.