The Bold and the Beautiful Spoilers: Quinn Pushes Flo To Marry Wyatt Right Away 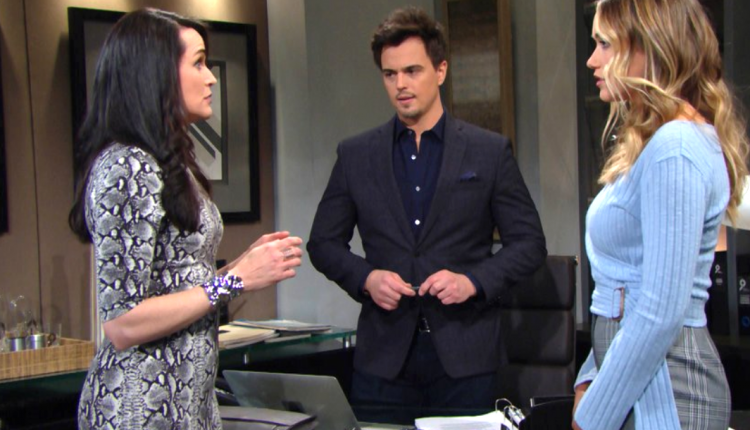 The Bold and the Beautiful (B&B) spoilers tease that Quinn Forrester (Rena Sofer) has something to be happy about. As B&B viewers know, she’s been on edge lately about Brooke Forrester’s (Katherine Kelly Lang) interference in her marriage to Eric Forrester (John McCook). There’s been a lot of angst for Quinn, but at least there’s one thing that’s currently going her way – Wyatt Spencer (Darin Brooks) wants to get back together with Flo Fulton (Katrina Bowden).

Well, Wyatt’s new relationship plans have made Quinn tremendously happy. As B&B viewers know, Quinn is quite outspoken when it comes to going Wyatt’s love life. She’s made it clear for some time now that she doesn’t think that Sally Spectra (Courtney Hope) is the right woman for Wyatt. So when Wyatt recently told her that he was in the process of breaking up with Sally and reuniting with Flo, Quinn was thrilled.

For a while, it didn’t seem like Wyatt would ever get over what Flo did with respect to the kidnapping and illegal adoption of Beth Spencer (River Davidson and Madeline Valdez). It took a while for him to reconcile what Flo did with the person she is, but finally, he decided to forgive her, and at that point, he realized that he wanted to be with her again and dump Sally.

Well, according to the Bold and the Beautiful spoilers, Quinn will be so happy about the whole thing that she’ll approach Flo, probably with a plan to celebrate their reunion. However, Flo might not quite feel like celebrating, given that Sally has decided to not let Wyatt go without a fight. She told him in no uncertain terms that she wasn’t going to just let him walk out of her life, and that leaves Flo and Wyatt in limbo.

But it seems that Quinn will have an idea on how to deter Sally from her quest to hold on to Wyatt. According to B&B spoilers, Quinn will have a talk with Flo, during which she strongly encourages Flo to marry Wyatt asap. Of course, Flo certainly would like to get back together with Wyatt soon, and she’s stated before that she’d love to embark on a life with him and start a family, but it probably seems a bit soon.

The Bold and the Beautiful Spoilers: Here’s Why Hope Is Giving Thomas A Chance – Is She Blinded By The Lights? https://t.co/wTv91pre59 pic.twitter.com/Bm7NMU2Zvl

Plus, technically Wyatt will still be engaged to Sally, since their breakup really isn’t final yet. Flo might just tell Quinn that she needs to back off, although we can imagine that it will be pretty difficult for Quinn to put the brakes on when it comes to her son getting together with Flo, since she’s wanted this outcome for a long time now.

And sadly, Quinn’s attempts to rid Sally from Wyatt’s life will come at a really bad time for Sally. As B&B viewers know, Sally has been having some terrible physical symptoms, including trembling and nearly fainting at one point. She’ll soon seek medical attention, and B&B spoilers say she’ll wind up with a serious medical condition.

Sally could really use the support right now, but according to B&B spoilers, she’ll decide that she doesn’t want Wyatt to know anything about what’s going on with her health. Fortunately, though, she will get some support from Katie Logan (Heather Tom), so she won’t be totally alone, but still, she’ll be without the emotional comfort from a significant other – all while Flo and Wyatt are making happy plans to reunite.