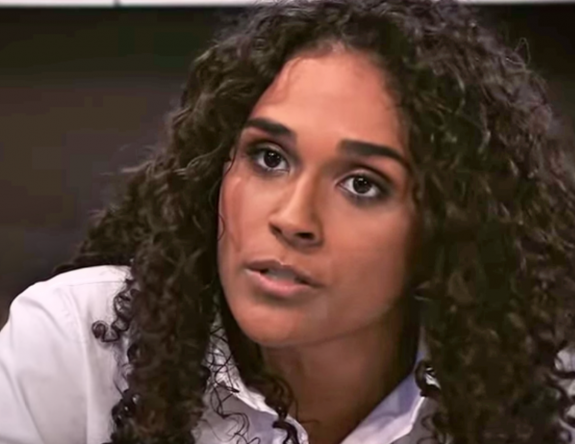 Gladys Corbin (Bonnie Burroughs) comes out and says Brando Corbin’s (Johnny Wactor) name. Jason Morgan (Steve Burton)arrives and Jordan tells him he has a lot to answer for. Gladys begs the paramedics to help Brando as he is placed in the ambulance. Gladys rides to the hospital with him. Tony Demarco (Phillip K. Boyd) gives Jordan his statement. Jordan doesn’t believe that the gunmen just left on their own.

Jordan wants Tony to go through his route with Harrison Chase (Josh Swickard). Jordan asks Jason if he would walk away, Jason wasn’t there, he can’t say. Marcus Taggert (Real Andrews) arrives and asks if Jordan needs help. Taggert tells Chase that the third gunman left chasing after a gunman. Jordan says Sonny Corinthos (Maurice Benard) is getting Mike Corbin (Max Gail) settled and then she has plenty of questions for him. Jordan threatens to take down Sonny and Jason.

General Hospital’s Chase questions Jocelyn Jacks (Eden McCoy) again. Jocelyn explains what happened again Chase tells Jocelyn she saved Michael Corinthos’ (Chad Duell) life. Chase comes to the hospital and orders Sonny’s men to leave the hospital before he arrests them. Gladys is worried about her son and needs some answers. Jocelyn tries to calm Gladys down. Carly doesn’t know that Laura Collins (Genie Frances) was shot and is in surgery. Jasper Jacks (Ingo Rademacher) blames Sonny for this and Carly tells him that Sonny was out of town with Mike.

Carly asks Jax to take Jocelyn to Sonny’s compound. Carly needs to stick around and see how Brando got involved in this. Carly wants to know why Gladys lied about Brando being alive. Hamilton Finn (Michael Easton) comes out and lets Gladys visit Brando. Finn promises to make sure Carly gets any updates. Liz Baldwin hands over Brando’s personal effects to a cop. Carly removes a picture of Gladys and Dev from Brando’s effects.

General Hospital’s Michael arrives at the Corinthos compound with Sasha Gilmore (Sofia Mattsson). Dev Cerci (Ashton Arbab) asks what is going on, Michael tells him something bad when down tonight. Michael explains to Dev that Jocelyn is ok. Michael receives a call from Jason who informs him that Carly was at the warehouse and there was a shooting there.

Jason assures Michael that he will be in touch as soon as he can. Jordan wants to know what happened in Brooklyn. Jordan says the waitress saved Jason by telling the cops that she saved his life. Jordan wants to know who targeted Sonny because she knows he didn’t want a fight in a Brooklyn diner. Jordan asks who knew Sonny would be there. Dev asks Michael what if this is just the beginning. Michael tries to calm Dev. Michael asks Dev to go spend time with Avery Corinthos and make her feel safe.

Sasha asks if Michael thinks this will calm Dev down. Sasha says comforting Dev seems like second nature to Michael. Sasha wonders how many times Michael has been through this. Sasha is terrified after what happened. Sasha doesn’t know if she can go through that again. Jocelyn arrives home and Dev hugs her. Jax wants Jocelyn to go upstairs and get some rest. Jocelyn refuses to go upstairs. Jax says this is nothing good. Dev is concerned when he learns that Brando is the one who saved Carly.

General Hospital Spoilers: Michael And Sasha Relocate And Move In Together https://t.co/vVzc3gb0yU pic.twitter.com/hwZPVOMIHD

Jax tells Liz that Nik is the reason Hayden is gone. Nik says he thought Hayden would have checked in by now. Liz tells Nik she doesn’t believe his lies and neither does he. Liz approaches Finn and tells him that Jax told her the truth. Liz tells Finn she is there for him and they decide to do a play date.

General Hospital’s Ava Jerome (Maura West) and Valentin Cassadine (James Patrick Stuart) argue in front of Nina Reeves (Cynthia Watros). Valentin isn’t going to stop until he gets back everything he has lost. Valentin tells Nina he plans to get back everything he lost. Valentin tells Nina that she has a life with him and Charlotte Cassadine (Scarlett Fernandez). Nina tells Valentin that she was in on this with Ava. Ava tells Valentin that he doesn’t know anything about love and he needs to leave.