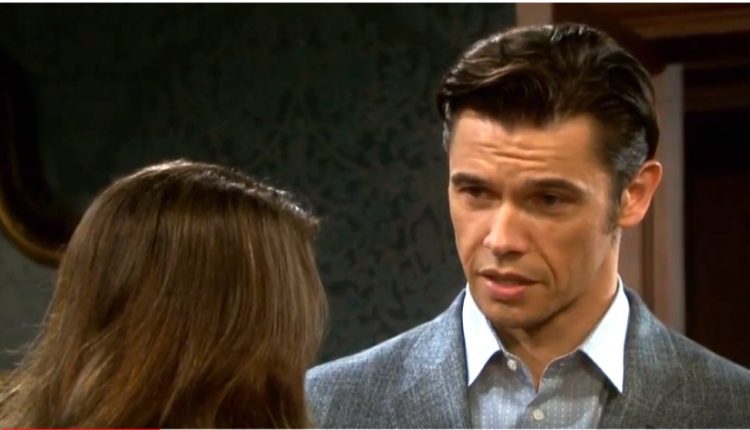 In this week’s Days of Our Lives weekly preview, “Words”, Sarah Horton (Linsey Godfrey) finally tells Xander Kiriakis (Paul Telfer) the words he’s been longing to hear, that she’s in love with him, as a stunned Xander asks, “Me?!” Eric Brady (Greg Vaughan) finally tells Nicole Walker (Arianne Zucker) the words he couldn’t say – “I forgive you!” Finally, Brady Black (Eric Martsolf) tells Kristen DiMera (Stacy Haiduk) the words he can’t deny as he tells her it’s about time they gave their relationship another chance!

Monday, Princess Gina Von Amberg aka “Hope Brady” (Kristian Alfonso) consoles John Black (Drake Hogestyn) who breaks down sobbing when she tells him, falsely, that Stefano DiMera aka “Steve Johnson” (Stephen Nichols) killed “his queen of the night” when she failed to cooperate with him, and that Marlena Evans (Deidre Hall) is dead! Meanwhile, Chad and Abigail DiMera (Billy Flynn, Kate Mansi) have numerous questions about a portrait that Abigail uncovered in Friday’s episode of Days of Our Lives, of Steve Johnson made up like Stefano DiMera right down to the ring! Also on Monday, Xander is stunned when he finds Eric and Sarah in a compromising position, and Nicole comes clean to Eric about her and Brady’s fake relationship.

Tuesday, Eric and Nicole officially reconcile, while Ciara Brady (Victoria Konefal) fears she’s let Ben Weston (Robert Scott Wilson) down. She blames herself for wasting all that time trying to exonerate Ben based on false leads, although they would free Will Horton (Chandler Massey) if he wanted to be freed. Also on Tuesday, Sarah declares her love for Xander, and Brady and Kristen share a kiss.

Days of Our Lives Spoilers: Eric And Nicole Reconcile Only To Be Torn Apart Again https://t.co/KqPQ2LZVHV pic.twitter.com/9KYInnqqNQ

Wednesday, it sounds like something may have gone wrong with the pacemaker app on Gabi DiMera’s (Camila Banus) phone, or else someone is struggling with her over her phone as she scrambles to keep control over Julie Williams’ (Susan Seaforth Hayes) heart! Meanwhile, Eric moves back in with Nicole, and also on Wednesday, JJ Deveraux (Casey Moss) and Lani Price (Sal Stowers) make moves to thwart Gabi’s hold over Julie, and Xander and Sarah have a romantic evening.

Thursday, Clyde Weston (James Read) pushes Ben to escape from prison with him since Ben is out of appeals. Clyde may not be the father of the year, but he doesn’t want his son to die either. Meanwhile, Detective Rafe Hernandez (Galen Gering) and Roman Brady (Josh Taylor) arrive in Prague, the last known location of Stefano DiMera to search for Hope and Marlena. Also on Thursday, Ciara hits on a new theory regarding Jordan Ridgeway’s (Chrishell Stause) killer, and Gina drugs John!

Friday, “Steve” reveals his true identity to Marlena, who may not be sure whether the same thing happened to the real Steve as happened to the real Hope, or if he’s had a psychic break and believes he’s really Stefano DiMera! Either way, it will be shocking news, especially considering he told her that Stefano had killed John! Back in Salem, Abigail and Chad question Kristen about the painting of Steve as Stefano to see if she knows anything about it. Also on Friday, Will joins in and helps Clyde and Ben with their escape plan, and Gina goes for broke to win over John!