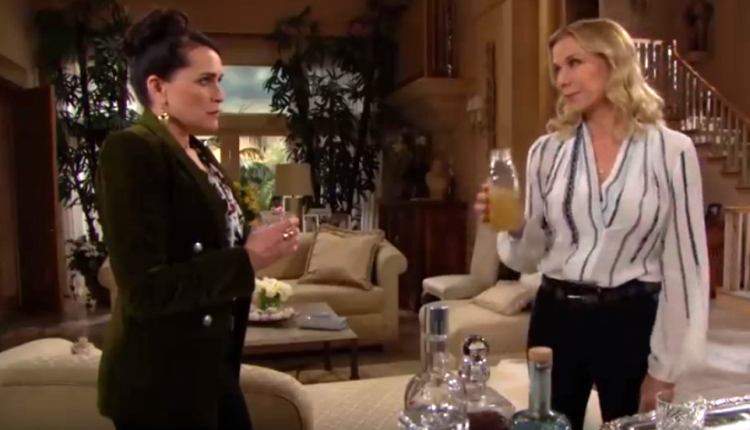 The Bold and the Beautiful (B&B) spoilers for the week of February 3-7, tease that the action will really be heating up on the CBS soap. First off, the battle between Quinn Forrester (Rena Sofer) and Brooke Forrester (Katherine Kelly Lang) will rage onward. As B&B viewers know, Quinn has just spiked Brooke’s drink bottle with vodka, so we’ll see what the fallout from that will be. Brooke has past alcohol abuse issues, so things could get messy and fast!

Later in the week, Quinn will get propositioned by Thomas Forrester (Matthew Atkinson) after he gets wind of the fact that Quinn and Brooke are at war. He’ll ask Quinn to partner with him to banish Brooke from the family for good. But will Quinn go there? She works pretty effectively on her own, and she might not want to get tangled up with Thomas in her efforts to bring down Brooke. We’ll see what happens there.

Quinn will break away from her fight with Brooke for a while when she spends some time with Flo Fulton (Katrina Bowden) and wishes her some heartfelt congratulations on her reunion with Wyatt Spencer (Darin Brooks). Of course, Quinn has wanted Flo and Wyatt to reunite for a long time, so she’ll be pleased as punch. But B&B spoilers also say that Quinn will push Flo to marry Wyatt quickly – even before he’s got his breakup settled with Sally Spectra (Courtney Hope).

As B&B viewers know, Brooke promised Quinn that she’d do everything she could to interfere with Wyatt and Flo’s relationship, since Brooke can’t stand Flo. That might be part of the reason why Quinn pressures Flo to make her relationship with Wyatt official quickly – she won’t want Brooke meddling and getting in Wyatt’s head about all of Flo’s mistakes and lies.

Speaking of Wyatt, the Bold and the Beautiful spoilers for the week of February 3-7 say that he’ll have a conversation with his brother Liam Spencer (Scott Clifton) looking for advice. Wyatt will be feeling horrible about how he’s hurt Sally by reuniting with Flo. He’ll think that perhaps Liam can offer some insight, considering what he’s gone through in the past with Hope Logan (Annika Noelle) and Steffy Forrester (Jacqueline MacInnes Wood).

It seems, though, that Wyatt will continue to worry about Sally, and that she’ll keep him at arm’s length as she deals with her health crisis. According to B&B spoilers, Sally will get a devastating diagnosis this week, and she’ll get the support of Katie Logan (Heather Tom) throughout it all, but she’ll want to keep her terrible news from Wyatt. It looks like Sally won’t want him to pity her or feel like she’s using her illness to hold onto him, so she’ll stay mum.

But Wyatt will be determined to talk with Sally and address their breakup. He’ll also want to express his deep concern for her, so according to B&B spoilers, he’ll show up at Forrester Creations to see her. However, Sally will shut him down and even though she’s got the opportunity to clue him in on what’s going on with her, she’ll stay quiet.

Other B&B spoilers for the week of February 3-7 say that Liam will have some drama of his own. He’ll have a tense interaction with Brooke, who will no doubt want to know what on earth he was thinking when he kissed Steffy and devastated Hope in doing so. Liam will try to explain to an angry Brooke, and it looks like Brooke will get even angrier when Liam blames himself for the kiss ha shared with Steffy. Brooke will fire back that Thomas caused all of this, not Liam.

Brooke will also have a tense interaction with Steffy over the “Steam” kiss. Brooke, Hope, and Steffy will talk at Forrester Creations, and it seems that Hope will still be feeling raw over the kiss that she witnessed between Steffy and Liam a while back. Steffy will be feeling guilty about the whole thing, and as B&B viewers know, the kiss didn’t just come out of nowhere. Steffy kissed Liam on cue when Thomas signaled her that Hope was approaching.

But will Steffy tell Hope the truth about the kiss? She’s shown in the B&B promo for the week of February 3-7 telling Hope that there’s something she needs to know about the kiss, but whether Steffy really goes through with her confession remains to be seen. As B&B viewers know, Thomas seems to materialize or call Steffy every time she’s about to confess to the kiss, so he might just interrupt her confession to Hope, too!

Later, Liam will spend some quality time with Steffy and Kelly Spencer (Zoe Pennington). Look for some nice family scenes and fun interactions between Steffy and Liam. B&B spoilers indicate that the two will even share a sweet kiss during their time together, so sparks will be flying, much to the delight of “Steam” fans.

Next, Katie will find herself enchanted with Bill Spencer’s (Don Diamont) behavior during the week of February 3-7. As B&B viewers know, Bill has done a lot of change over the past year, and he was really scared when Katie experienced her kidney failure. Bill’s got a renewed sense of the importance of family, and it looks like he’ll be expressing this to Katie demonstratively over the next week. B&B spoilers say that Katie will be taken by Bill’s attentiveness and that the two will share some nice scenes.

Finally, Zoe Buckingham (Kiara Barnes) will get a big surprise when Thomas and others at Forrester Creations throw her a birthday party. It will probably come as a big shock to Zoe that anyone remembered or acknowledged her birthday, especially after what she and her father did with respect to Beth Spencer’s (River Davidson and Madeline Valdez) kidnapping and illegal adoption.

Of course, Thomas needs to continue his ruse that he’s really into Zoe in order to keep Hope in his life, so chances are, the party will be partly about making a statement to Hope. Zoe will also get some flattery during the week of February 3-7, when Carter Walton (Lawrence Saint-Victor) pays some attention to her. He’ll note how beautiful she is before asking some probing questions about her relationship with Thomas. Thomas might have some competition for Zoe’s affections!

It looks like we’re in for a great week! Stay tuned to the CBS soap and don’t forget to check Celebrating The Soaps often for the latest Bold and the Beautiful spoilers, updates, and news.