Days of Our Lives Spoilers: Gabi Is In Panic Mode – Losing Control Over Julie Williams And Her Heart 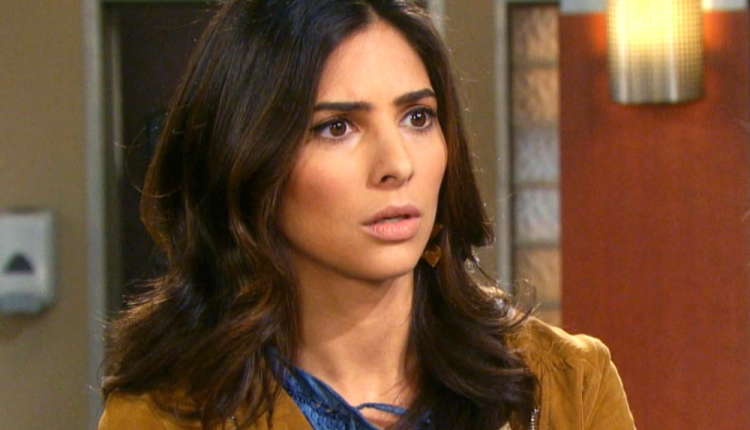 Days of Our Lives spoilers tease that Gabi Hernandez DiMera (Camila Banus) will soon be scrambling to keep control over Julie Williams’ (Susan Seaforth Hayes) in an upcoming episode of Days of Our Lives!

Days of Our Lives viewers will recall that Gabi has an app on her phone by which she can control Julie’s heart rate by controlling her pacemaker. She used it to force Lani Price (Sal Stowers) to dump Eli Grant (Lamon Archey) at the altar of her wedding to him over a year ago.

Gabi proved it worked too, one day in the hospital when she turned the pacemaker up right in front of Lani, and she saw Julie becoming distressed and the effects of the heart rate being too fast! This is why Lani has been so afraid to do anything to stop Gabi or to tell Eli or anyone else the truth and about the app, except very recently she confided in JJ Deveraux (Casey Moss) who has been trying to help her.

He was unable to get past the security steps in place in Gabi’s phone to disable the app, however when he tried in a recent episode of Days of Our Lives. But now, since Gabi is scrambling to keep control over Julie’s heart, perhaps he has made some progress!

DOOL Spoilers – Gabi Hernandez DiMera Has To Maintain Control Over Julie Williams’ Heart Because It Is Her Leverage!

Gabi must maintain her control over Julie’s heart because it is her leverage! She can control Lani with that leverage, and Lani knows things that could ruin Gabi’s life and possibly even put her in jail! She could definitely break Gabi and Eli up if she could get Eli to believe her about the real reason she dumped him at the altar – and even though outwardly he seems committed to Gabi, if he only knew that Gabi had been threatening to kill his grandma Julie with this app on her phone, that would be the end of their relationship!

Eli left the police force, as did Lani, so neither could arrest Gabi on the spot, nor could JJ, but they could certainly detain her until the police came to do a real arrest! However, Gabi just having this app on her phone isn’t enough evidence to make a case against her.

Basically, it would be a she-said-she-said. She would have to be caught in the act with Julie’s effects being seen as she operated the app on her phone, and that would have to be in front of witnesses that could testify in court what happened!

Days of Our Lives Spoilers – They Can’t Disable The App, They Can’t Delete The App – What Can They Do?

The wording “Gabi scrambles” implies there is a sudden event that causes Gabi either to lose control of the app or of the phone itself – or, perhaps Julie has to have a different pacemaker put in and the app doesn’t work on it – and Gabi has to scramble to maintain control over her heart.

Pacemakers do have to be changed out every few years in most cases, and maybe it’s time for Julie’s to be changed. One would think that the app has to be synced in with the pacemaker for it to work and if there is a different pacemaker, then maybe the app doesn’t work anymore.

This has nothing to do with whether Lani and JJ were able to disable it or not, and Gabi would have to try to do something to Julie’s heart and see it doesn’t work anymore for her to have to scramble for control! Either way, if Gabi loses control of Julie’s heart, she loses all her leverage over Lani!