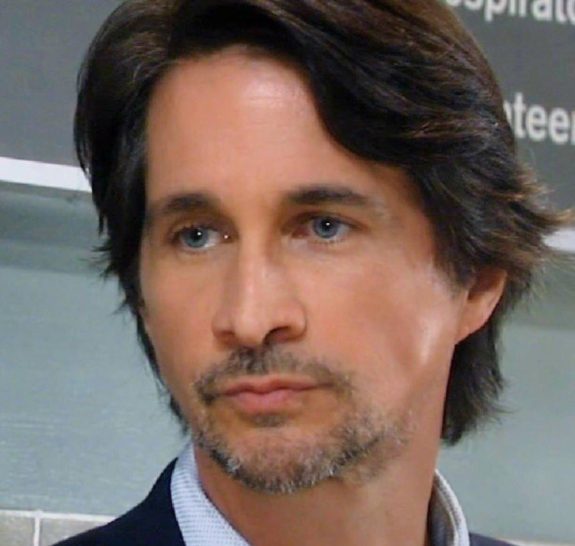 General Hospital spoilers tease that Finn Hamilton (Michael Easton) will end up making a rather fateful choice as the Peter August (Wes Ramsey) related tension will soon get worse between him and Anna (Finola Hughes).In fact, it’s a choice that could have a major impact on their future as a couple. Read on for all of the latest spoilers.

General Hospital co-head writer Dan O’Connor says that Finn worries that Anna might be getting in over her head. That’s because of her belief and trust in her son is so blinding that she doesn’t see what Peter is capable of doing.

For Franco, this is more than a little troubling. The writer tells Soaps in Depth in a new interview, “It doesn’t sit well with him, but Anna’s argument is that this evidence that Anna has come across is circumstantial, at best. That is what Anna would argue over and over again – that to use this to paint a certain picture of Peter would be a very incomplete picture. There is no smoking gun, there is no bloody handkerchief – it is purely circumstantial.”

GH Spoilers – The Past Comes To Light Again

General Hospital spoilers tease that Anna feels that if Robert truly does have something to complain about Peter, it’s largely prejudice. But then again, because he has Faison’s blood in him, Robert has no use for him. As far as Anna is concerned, she thinks that Robert is acting crazy.

She also believes that Robert’s point of view is simply out of prejudice, and nothing more. Of course, there’s also the fact that Faison had put Anna and all of her loved ones through hell for so many years.

Either way, Franco surely has his work cut out for him and that he’s going to have to make a decision about Peter that might not sit very well with Anna. Needless to say, General Hospital fans will have to tune in to find out what will happen next!