General Hospital Spoilers for February 3 to February 7: Sonny’s Family Is Under Attack While Nikolas Continues To Try And Make Amends 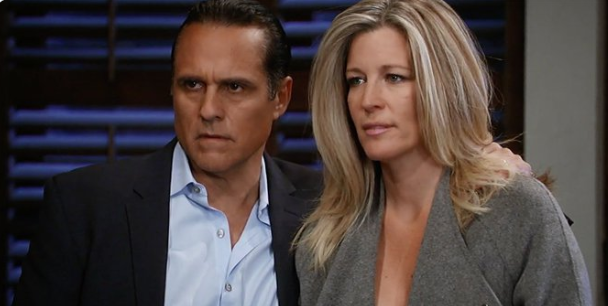 General Hospital spoilers tease that there will be five key takeaways for GH fans to look for in this week’s General Hospital. Remember, although there may or may not be pre-emptions due to breaking news of the Donald J. Trump impeachment trial, ABC is now putting every new episode online after 8:00 pm EST on abc.com, on the ABC app, and your local ABC affiliate may be showing it later as well, usually in place of the first half of the mid-night ABC news that starts around 3:00 am. Set your DVR accordingly. The trial is scheduled to run no later than Wednesday, February 4.

Sonny Corinthos’ (Maurice Benard) family is under attack, with coordinated attacks from an unknown enemy targeting Michael Corinthos (Chad Duell) at one location, Carly Corinthos (Laura Wright) and Sonny’s coffee warehouse where she was with Gladys Corbin (Bonnie Burroughs) when the gunfire started, and even at a restaurant in Brooklyn where Sonny had taken Mike Corbin (Max Gail) on the way to trying to get him in the Alzheimers’ treatment trial in Manhattan, which didn’t happen.

If Jason Morgan (Steve Burton) hadn’t been along, both Sonny and Mike could have been killed! Sonny arrives at the General Hospital emergency room to talk to Carly, likely check on his old friend Mayor Laura Collins (Genie Francis) who was hit with a bullet, and also talk to Gladys, whose not so dead son Brando Corbin (Johnny Wactor) appeared out of nowhere and saved Carly’s life!

Carly is worried as to who would attack their family, and the knowledge that someone had been keeping an eye on them all is, of course, disconcerting and frightening! By Thursday, Sonny will know some of the answers as he faces down an enemy and Jason delivers a warning!

Nikolas Cassadine (Marcus Coloma) continues to try and make amends with family and friends, and he definitely has a lot of bridges to try to rebuild! Nikolas is already at General Hospital when his mother is brought in after the shooting, and once she is able to receive visitors he talks to her and notes that now that he understands that he went about things the wrong way, resulting in hurt and grief for his family members, he fears he will never be able to make things right with his family.

His sister Lulu Spencer (Emme Rylan) will come clean with their mother about something, and it could relate to Nikolas as well, and Laura will have a frank discussion with Nikolas at the end of the week. Then there’s the Hayden Barnes (Rebecca Budig) issue – Dr. Hamilton Finn (Michael Easton) knows what really happened with Hayden’s disappearance and so does Jasper Jacks; (Ingo Rademacher) Jax wonders what the last straw will be and Finn is upset with Nikolas because he has a four-year-old daughter wanting Mommy!

Nelle Benson Archer (Chloe Lanier) continues to work her plan to take the Quartermaine millions for herself, as she has been moved into the mansion – so she thinks – by Michael, with the sole purposes of keeping her away from Wiley Cooper-Jones (Erik and Theodore Olson) and being able to keep an eye on her himself! Nelle tries to appeal to Brooke Lynn Quartermaine’s (Amanda Setton) senses, and Attorney Martin Gray (Michael E. Knight) pays Nelle a visit.

She doesn’t know that he’s not really working for her, but for Valentin Cassadine (James Patrick Stuart), however. Nelle will be miserable when she finds out she’s living in the Quartermaine boathouse instead of the mansion, and Michael and Sasha Gilmore (Sofia Mattsson) will relocate – partly to keep themselves safe from Sonny’s enemies, partly from Nelle.

Tracy and Ned Quartermaine (Jane Elliot, Wally Kurth) will disagree on whether Michael’s poor judgment at moving Nelle onto the Quartermaine property interferes with his ability to continue to be the ELQ CEO. Martin will get a call at the end of the week.

Anna Devane (Finola Hughes) will continue to protect Peter August (Wes Ramsey), in spite of her fiancé Finn’s concerns that she is in over her head and not being objective concerning her son, while Sam McCall (Kelly Monaco) identifies a possible ally in taking Peter down, namely Finn!

Finn will be torn between protecting Anna from herself and her poor judgment or telling what he knows about the work connection between Peter and the attempted murderer of Dr. Andre Maddox (Anthony Montgomery) and Franco Baldwin (Roger Howarth) in the operating room, risking anger from Anna! Meanwhile, something happens to cause Peter to be taken aback!

Brad’s behavior becomes more and more bizarre and it is obvious that he needs some major psychiatric help and that Wiley needs a safe home! Julian Jerome (William DeVry) calls a truce, possibly with Brad.