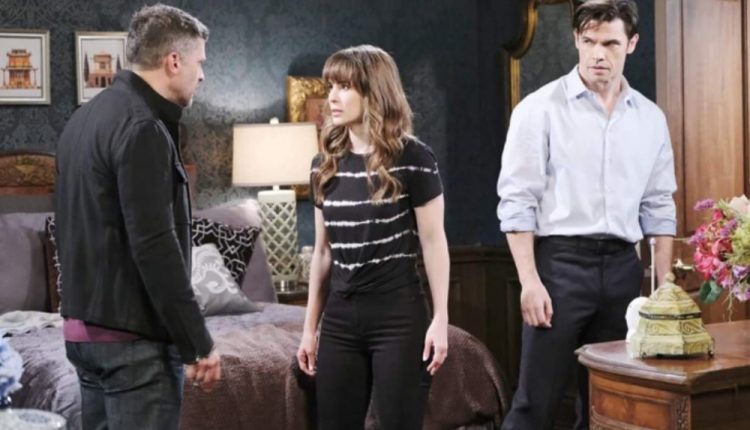 Days of Our Lives spoilers tease that Xander Kiriakis (Paul Telfer) will be stunned at finding Eric Brady (Greg Vaughan) and Sarah Horton (Linsey Godfrey) in a clinch – and not only in a clinch, but in a state of undress in an upcoming episode of Days of Our Lives!

Days of Our Lives Spoilers – Xander Kiriakis Walks In On Something He Cannot Unsee!

Xander walks in on something he cannot unsee, as his worst nightmare – well, second worst to if little Mickey Horton (the May twins) were to die – unfolds in front of his eyes! There are Sarah and Eric, looking like they have just had sex and getting up and putting their clothes back on!

Xander is stunned, and he is also devastated because he’s in love with Sarah, and after getting so much closer he thought maybe he had a chance with her, that maybe she would return his loving feelings. It is so hard to be in love with someone that apparently only cares for one as a friend!

Sarah looks around and sees Xander standing there staring and is extremely embarrassed! Eric makes a hurried trip out, and Sarah and Xander are left alone in the room. Sarah also notices that Xander is about to cry and realizes what happened. She is extremely sorry that he walked in on herself and Eric and realizes what it must look like, but that nothing happened – it almost did, but she couldn’t go through with it!

They were just caught up in the fear and grief of Mickey needing a bone marrow donor to have a chance to live, and that neither of them were a match! They were trying to comfort each other but it almost turned into comfort sex when hormones momentarily overrode reason!

Sarah knows how deeply Xander loves her and how long he has been in love with her and reassures him that she would never want to hurt him the way he appears to be hurting. She goes on to explain why she couldn’t go through with sex with Eric – because she’s in love with Xander! Xander is even more stunned, and all he can say is “Me?!” He can barely believe what he’s hearing!

Sarah certainly spent enough time in denial and trying to fight off her feelings, and giving Xander plenty of snark and sass and sarcasm, to boot, but that is one of the things he loves about Sarah! Other than the sad situation with baby Mickey, Xander is the happiest man in the world!