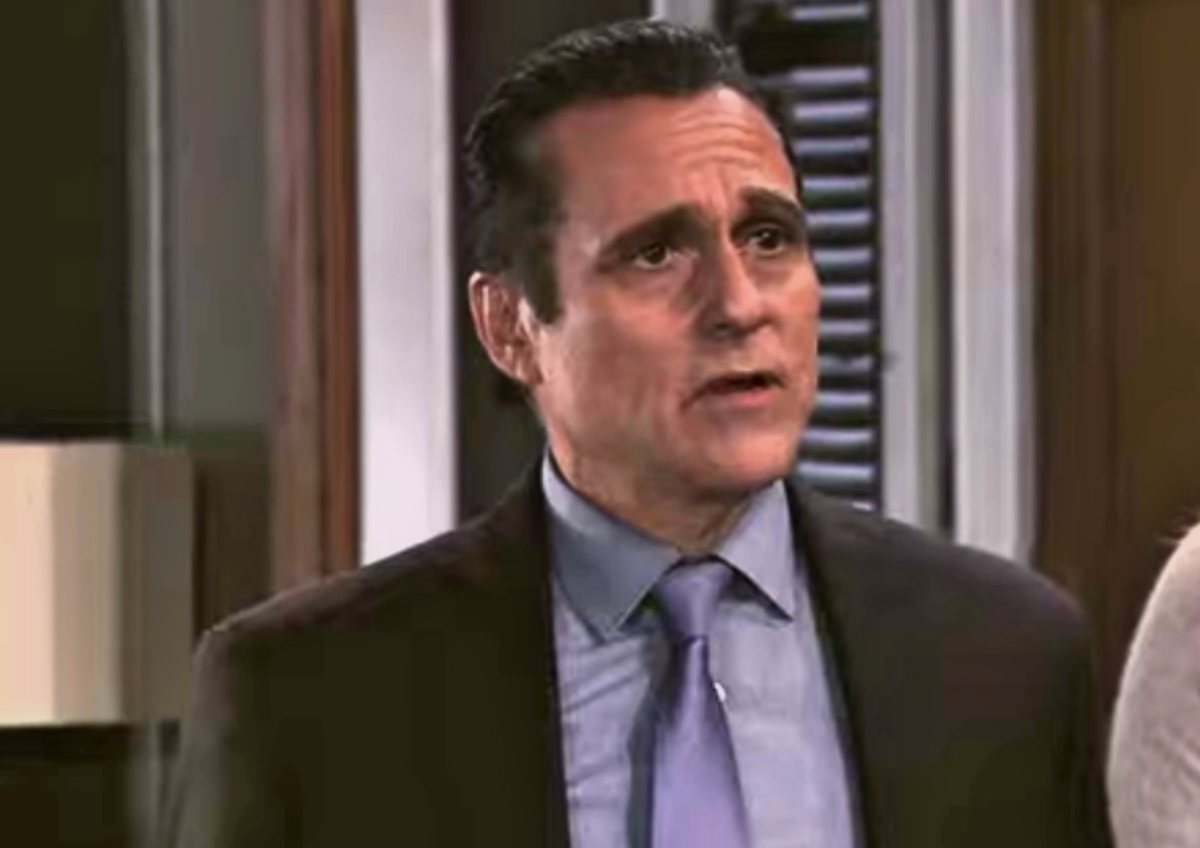 General Hospital (GH) recap for Monday, February 3, 2020, reveals Gladys Corbin (Bonnie Burroughs) talking to Brando Corbin (Johnny Wactor) in the hospital, she tells him he saved Carly Corinthos’s (Laura Wright) life and asks him why is he back in Port Charles.

Sonny Corinthos (Maurice Benard) fills Carly in about the shooting in Brooklyn, and how Mike Corbin (Max Gail) was so scared. He tells her Mike was enjoying himself there and remembering things. Carly tells Sonny Brando is alive. So when Gladys meant Brando was dead she meant “Brando was dead to her”, meaning they had a falling out. Carly tells Sonny about the shooting at the warehouse.

She tells Sonny that Brando saved her life. Sonny goes to see Brando. He asks if he is Gladys’ son. He says “so you’re Sonny Corinthos”. He asks what he is doing here and what happened at the shooting. Carly talks to Gladys. She asks why she lied. She apologizes to Carly and says Brando was dead to her because when he came back from the war, he wasn’t the same. Carly says that doesn’t mean she should have lied. She says Brando got mixed up in bad things and people.

Brando tells Sonny he came looking for Gladys, saw on her MyFace page that she was staying with Mike and his family. Sonny menacingly asks him what does he know about his family. Brando tells him how he saved Carly. Sonny tells Brando that Gladys said he was dead. Carly whips out a photo of Gladys and Brando that she found in his belongings. Gladys cries at the photo. She says that Brando found her MyFace page and came to find her. Carly says “why the hell were you on social media?!”

General Hospital Spoilers: Gladys Corbin Wanted To Everyone To See How Happy She Was

Gladys said she felt like she had a family again. Gladys said she wanted everyone to see how happy she was. Carly says she thinks Gladys wanted to Brando to see the page. She admits to it. Carly looks at her like “something ain’t right over here. Brando tells Sonny he saw Glady’s MyFace page, a similar story to what Gladys told Carly. He says he saw his mother had a grandchild and that he ain’t got no kids.

He says “who the hell is Dev? Carly questions Gladys about Brando. Gladys said they haven’t spoken in years and that she said some harsh things to him and that he left. Carly doesn’t believe shit. Gladys said being Dev’s “grandmother” was something she loved doing. Carly said cuz Sonny is paying you. Sonny questions Brando. He says he was in Chicago before coming to PC. Says he is staying at a hotel. Brando asks who Dev is. Sonny said “don’t worry about that. Since you saved my wife’s life, you will get the best care possible. Carly ain’t buying Glady’s shit. Gladys tries to convince her. Carly says there is more to the story.

Sonny brings Gladys back down to reality and looks her dead in the eyes and says “if you even mention the fact that we are protecting Dev, you are going to REGRET it”. Gladys thanks him and asks if she can go see Brando. Sonny lets her. She leaves. Sonny tells Carly about his convo with Brando and that he didn’t learn much.

He says he has to figure out who tried to eliminate his family. Carly embraces him and says they were all almost killed today. They hug as Sonny looks on with that “someones gonna die” look. Gladys is with Brando. He tells her that Sonny treated him like a suspect. Gladys says Sonny’s bark is worse than his bite. She is leaves to get him some water. Brando stops her and asks who Dev is. She says “…Your son, honey.”
Brando is like

General Hospital’s Dev Cerci (Ashton Arbab) talks to Jasper Jacks (Ingo Rademacher), Jocelyn Jacks (Eden McCoy), Michael Corinthos (Chad Duell), and Sasha Gilmore (Sofia Mattsson) at Sonny’s. Sasha says it must be great to know your father is alive to Dev. The rest of them look at Dev, knowing the truth. Sasha sees that they need to talk so she goes outside for some air. Michael asks them what the deal with Brando is.

Michael goes on the terrace to see Sasha. Sasha and Michael talk. She asks if he is okay, and he says no. He tells her they need to stop seeing each other. She looks heartbroken. Michael and Sasha argue. He says he cannot put her in any more danger. She says no that she is not going anywhere. Jax is STILL at Sonny’s and tells Joss he is glad she is ok & that he loves her. He tells her he is gonna call Carly and see if Sonny is back. Joss says not to be too hard on Sonny. Jax says he can’t make that promise.

He leaves. Dev and Joss talk. Dev asks Joss if she is ok. Joss says she had Michael so she was ok. Dev says it could have gone left. She asks “were you worried about me”. Some love music starts playing. He says yeah and that he wishes he could take back how he reacted to the kiss. Sasha says Michael does not want her out of his life. He admits she makes his life more enjoyable. She says she wants to be there for him like he was during the Nina thing. He says he needs to keep her safe. She says she wants to keep him safe too, from Nelle.

Michael tells Sasha he is trying to protect her. She yells why and he yells “because I LOVE YOU!” Sasha tells Michael she loves him too. She says they will deal with this together. They kiss. Jasper is on the phone with Carly asking about Brando. She says she and Sonny are trying to get the truth. He says “Oh, Sonny is there? Put him on.” Carly hesitates and says it’s not a good time.

He says he will wait at Sonny’s until he comes home. Joss and Dev discuss their kiss. She says that after what happened today, the kiss is unimportant in comparison. Dev asks if she is sure and she says yes and that Mr. Phillips told her to write in her journal. Dev looks on like “man, I blew it.”

General Hospital’s Nikolas Cassadine (Marcus Coloma) visits with Laura Collins (Genie Frances). He apologizes and tells her he loves her. She is still unconscious. Nik continues to talk at Laura’s bedside. She ain’t waking up. Nik still talking to Laura. He talks about Lulu, Spencer, etc. Tells her he missed her while he was “dead” and that he wants to do and be better for everyone. Laura wakes up and says “Nikolas?

General Hospital’s Nelle Benson (Chloe Lanier) calls Brad Cooper (Parry Shen) to gloat she is living at the Quartermaine’s. She tells him to bring Wiley Cooper Jones (Theo and Erik Olson) over because she wants to see her son. Willow Tait (Katelynn MacMullen) sees Brad at the hospital and says she will help with Wiley. Brad tells her she is getting way too close to his son. Nelle runs into Brook Lynn Quartermaine (Amanda Setton) and tells her she was invited to live at the Quartermaine’s.

Nelle tells Brook Lynn that Michael invited her. Brook Lynn says she is lying and that Monica Quartermaine (Leslie Charleston) would never let her stay there after she tried to kill Michael. Brook Lynn and Nelle arguing back and forth. She tells Nelle that Michael just wants her there so she can stay away from Wiley. Brook Lynn tells Nelle to go stay at the Metro Court. Nelle says she isn’t staying at Carly’s hotel. Nelle brings up Brook Lynn’s work with Carly to break up Lante. Brook says it’s all in the past and she ain’t teaming up with Nelle to take down Carly. Nelle plays the kidney and prison card with Brook Lynn.

She tells Nelle that she has no idea what it is like to have all the Quartermaines against her, but she will. Nelle and Brook Lynn still going at it. Nelle trying to compare herself to Brook Lynn. Brook Lynn says she wouldn’t try to sabotage her fiancé’s boat and kill him or stalk a family, or drug a grieving father, or plot to kill a second fiancé. She says we not gonna bond. Nelle interrupts the kiss with a phone call. She tells him Brook Lynn won’t let her stay there. He tells Nelle to give Brook Lynn the phone. He tells her to give Nelle a room. She smiles. Brook Lynn tells her she has just the room for her: right next to Tracy Quartermaine (Jane Elliot).

General Hospital’s Willow questions Brad and asked what changed. Brad says she ratted him out to Chase and Michael. She tells Brad Nelle is dangerous and to figure out how to manage Nelle or she will. Brad and Willow argue about Wiley. Brad says he walked through fire with that kid. Willow looks at him like he has lost his mind. Willow says parents are supposed to walk through fire for their children. No reason to be around Nelle. He says he is lost without Lucas.

He says Carly is hovering and Julian constantly threatening him. He then says Michael acts like the child is his or something. Willow says Brad should be grateful that Michael has been helping him. Brad says he isn’t grateful for Willow or Michael’s help. Brad says Willow is part of the problem. He says she just wants to take Wiley back. Willow says it’s funny how you’re going off on all of us but not saying anything to Nelle.

Willow asks what’s the deal with Brad and Nelle and why is he always protecting her. Brad looks nervous. He says they are friends. Willow believes he is having a breakdown. She says his real friends are the ones who can help him. He says he doesn’t need anyone’s help. Willow tells Brad she is on his side. She says she can watch Wiley tonight and then they can figure something out tomorrow. He says she ain’t coming home tonight, she is FIRED.

So stay tuned to General Hospital airs weekdays on ABC once the impeachment hearings conclude. And don’t forget to check back here regularly for all your General Hospital news, information and spoilers!