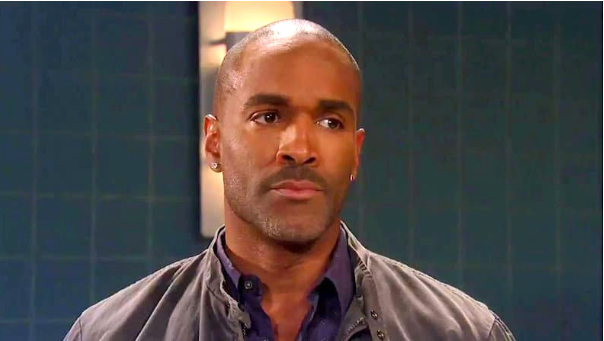 General Hospital spoilers tease that Curtis Ashford (Donnell Turner) is suspicious of Marcus Taggert (Real Andrews) and will voice his suspicions soon in an upcoming episode of GH!

Curtis can’t help notice that Taggert is a little too friendly and familiar around his wife, Police Commissioner Jordan Ashford (Briana Nicole Henry) and a little too snoopy otherwise.

General Hospital Spoilers for February 3 to February 7: Sonny’s Family Is Under Attack While Nikolas Continues To Try And Make Amends

He understands that Taggert was a detective for the Port Charles Police Department for years before he was in the drug enforcement administration with Jordan, but she brought him in on her private investigation around the suspicious death of Bob Massicotte, (Randy W. Goodwin) and he’s investigating local cases he has not been assigned! He’s not even being paid as an outside consultant to the PCPD and yet he’s just investigating away!

Curtis wants to know the real reason Taggert has come back to Port Charles, because it seems like he has a hidden agenda. It’s bad enough that he acts like he wants to get with Jordan, but Curtis suspects there’s even more than that. As soon as he showed up in town, things started happening – things that had not happened in Port Charles for years!

Taggert was in Port Charles in the years when mob wars happened on a regular basis, and there had not been a mob war in years. And while Curtis isn’t a fan of Sonny Corinthos (Maurice Benard) either, it seems awfully suspicious that a cop that had a vendetta against Sonny shows up in town, and at the same time, Sonny and his family members are all of a sudden targeted by some unknown entity!

And the attacks weren’t random – they were coordinated! If Sonny isn’t committing the crimes and attacks then he is a citizen of Port Charles that deserves police protection and for the crimes to be solved as much as any other citizen does even if he doesn’t want it.

Even though Jordan hasn’t told Curtis that Marcus was an old boyfriend of hers, he sure acts around her like he was or what he wants to be, and Curtis makes it clear to Marcus in no uncertain terms that Jordan is not available. He might go around it in an indirect way but in one that Marcus will definitely get the message!

He might see if Marcus wants to talk shop talk – about the crime wave just to get a feel about what Marcus is really up to. Curtis wouldn’t be surprised if somehow Marcus was tied to the crime wave, and with that unsatisfied vendetta he’s got going against Sonny Corinthos, maybe he’s set something up to take him out….but his whole family with him? That’s just not something that Curtis will support, and he will take action to stop it and Marcus Taggert in his tracks!