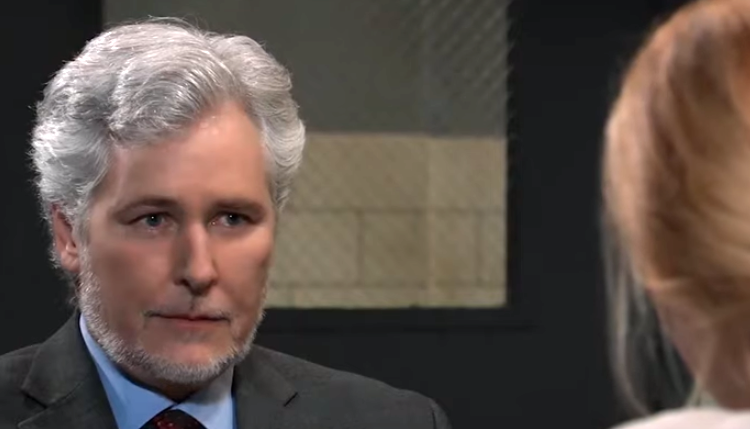 What Nelle Benson Archer doesn’t know might hurt her! And the thing she doesn’t know is that Martin isn’t really working for her, he’s working for Valentin Cassadine (James Patrick Stuart)! It’s Valentin that Martin is working to get the ELQ shares for, not Nelle! But Nelle has her own plan, as she always does, and when Martin meets with her, she will tell him what that plan is! Nelle thinks she’s a master strategist but she’s a rank amateur compared to Valentin, and that will be her downfall!

Martin thinks Nelle should just bide her time and not do things that could mess up her parole – the shares are probated and it takes time to clear the probate. Plus there are conflicting documents from Oscar Nero Quartermaine (Garren Lake Stitt) regarding the bequests.

Even though he may have made one bequest to Shiloh Archer (Coby Ryan McLaughlin), and Nelle is Shiloh’s widow, Shiloh died suddenly, which means even if there is an implied heir – like a widow, for instance – it doesn’t mean that Nelle automatically gets his shares. If Shiloh didn’t have a will, it means he died intestate – a legal term that means for all intents and purposes that the shares go right back into probate and a court decides who gets them! Nelle is expecting things to go way too fast!

Nelle tells Martin her plan, which of course she is certain will work. She tells him that Michael Corinthos (Chad Duell) had offered to buy her shares – which would be probated if Shiloh died intestate – telling her the money would allow her to live wherever she wanted. But Nelle had turned Michael down anyway because she doesn’t want what he offered – she wants it all, the whole Quartermaine estate, ELQ, the whole kit, and caboodle! And her plan?

Martin will have a hard time not laughing out loud at her plan to get everything; she plans to be such an annoying houseguest that they will do ANYTHING to get rid of her, including signing everything they own over to her! Martin will give her some more workable legal advice, including the phrase, however trite, “Good things come to those who wait.”

The last thing that Martin and Valentin need is for their pawn, Nelle, to mess everything up because she thinks that she knows everything and that all of her plans are perfect and foolproof! She is to take Martin’s advice and guidance, and if she doesn’t, he will no longer represent her – which of course, he really doesn’t anyway!