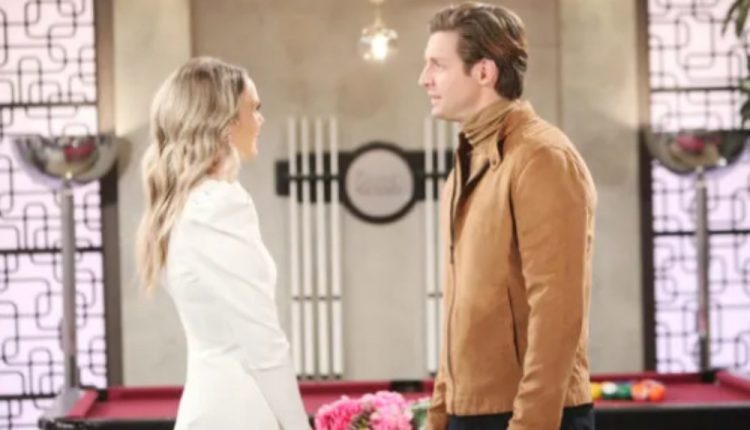 The Young and the Restless (Y&R) spoilers for Tuesday, February 4, tease that Billy Abbott (Jason Thompson) will head to the Newman ranch to see his kids, but he’ll encounter Victor Newman (Eric Braeden), who will tell him in no uncertain terms that this won’t be happening. Victor will say that it will be the last time that Billy will set foot on the ranch and he’ll berate Billy for breaking Victoria Newman’s (Amelie Heinle) heart again.

Meanwhile, at Newman Enterprises, Victoria and Nick Newman (Joshua Morrow) will talk about the upcoming gala, but Victoria will be distracted over her breakup with Billy. Nick will sympathize, and he’ll note that Adam Newman (Mark Grossman) and Chelsea Lawson (Melissa Claire Egan) might move to Paris. Nick will be supportive, and soon Billy will arrive.

Billy and Victoria will then talk alone, with Victoria berating him for his bar brawl and for his friendship with Amanda Sinclair (Mishael Morgan). Billy will say that he wants to see the kids, and he’ll note that Victor wouldn’t let him and that he ordered him off the ranch property. Victoria will say that he’s got a black eye, so he’ll decide to wait to see the kids until that subsides.

Next on Y&R, Abby Newman (Melissa Ordway) will talk with Chance Chancellor (Donny Boaz). Chance will want to take Abby on a date, and she’ll suggest that they go skating. They’ll go, then later, in a suit, they’ll start kissing and eventually make love. Abby will subsequently fib to her employees that she’s off at a dentist appointment, but when Chance orders room service, the employees will have delivered a toothbrush to the pair. They’ll find it amusing and end up making love again.

Next on Y&R, Phyllis Summers (Michelle Stafford) will arrive at Crimson Lights and encounter Sharon Newman (Sharon Case). Phyllis will be nice to Sharon, and Sharon will confront Phyllis, saying that Phyllis is just being nice because she has breast cancer. Phyllis will be stunned by that news, saying that she’s hearing it for the first time.

The ladies will chat some more, and Phyllis will indicate that she wants to treat Sharon normally, but she’ll end up saying that Sharon’s a great mom, which will prompt a look from Sharon. Phyllis will then ask Sharon to get her some coffee, and things will seemingly get back to normal.

Next on Y&R, Tessa Porter (Cait Fairbanks) and Mariah Copeland (Camryn Grimes) will video chat, and Tessa will update Mariah on how the tour is going. Tanner Watts (Chase Coleman) will suddenly appear on the other end of the call, unnerving Mariah. Mariah will talk a bit with Lindsay (Kirby Bliss Blanton) at the bar, sharing that it’s getting harder not talking about what’s bothering her.

Later Devon Hamilton (Bryton James) will arrive and he’ll unleash some terrible news onto Mariah. He’ll say that he’s decided to close down Power Communications, which will really take Mariah off guard. Devon will explain that Power just can’t sustain itself long term. Once Devon leaves, Mariah will order a drink to cope.

Next on Y&R, at Nick’s house, Phyllis will tell Nick that she knows about Sharon’s breast cancer. Phyllis will say that while she and Sharon have always been at odds with each other, that all seems pretty petty now. Phyllis will then talk about how she went after Chance to irritate Abby, but that everything can change in an instant. They’ll discuss Sharon’s chances of beating this, and they’ll agree that it will be a good day when Phyllis can once again be a thorn in Sharon’s side.

Meanwhile, at her home, Sharon will get a call saying that she’s forgotten her hair appointment. Afterward, she’ll put a scarf around her hair, clearly anticipating the day that she loses her hair.

Finally, back at the Newman ranch, Victoria and Victor will discuss her need to tell the kids about what’s happened between her and Billy. He’ll tell her not to put the task off, and that Billy and Amanda’s relationship went far beyond what she thought. Victor will then say that the two visited a hotel on multiple occasions and that he can prove it. Victoria will be horrified. Victoria will then call Billy to say that she wants to meet to let him know what’s going to happen with their children.