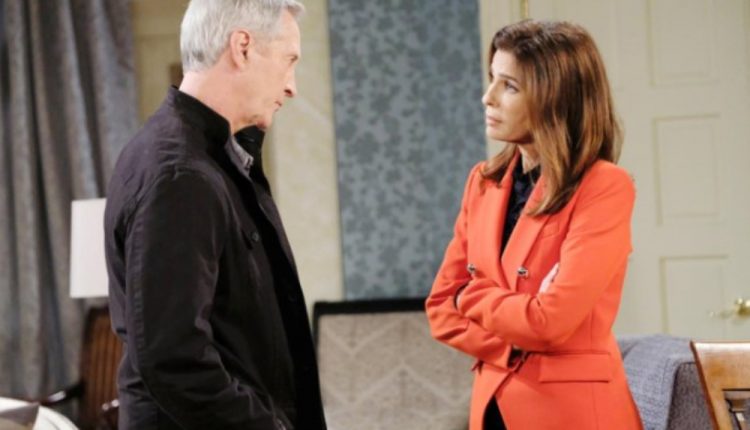 Days of Our Lives spoilers tease that Princess Gina Von Amberg, aka “Hope Brady” (Kristian Alfonso) will console John Black (Drake Hogestyn) over his wife Marlena Evans’ (Deidre Hall) “death” in an upcoming episode of “Days of Our Lives”.

Days of Our Lives Spoilers – The Plan – Neither John Black Or Marlena Evans Is Dead, But They Each Are Told The Other One Is

The plan which Princess Gina and Stefano DiMera aka “Steve Johnson” (Stephen Nichols) agreed on to break John and Marlena up so that Gina could capture her “pawn” and Stefano could capture his “queen” was to kidnap them separately, tell each that the other one is dead, and then brainwash them.

John is in Prague, where his Black Patch partner – or so he thought – “Steve” took him, on a hunt for Stefano, and led him to what appeared to be an abandoned warehouse where they found Dr. Wilhelm Rolf (William Utay) who shot “Steve” to death right in front of John, so that John would be weak and experiencing maximum grief with both his partner and his wife dead, and therefore vulnerable to Gina’s advances!

DOOL Spoilers – “Steve Johnson” Goes Back To Salem, Where Marlena Evans Is Trapped In The Lair

While Gina goes to Prague as Hope Brady, to “rescue” John, Stefano goes back to Salem to “rescue” Marlena, who is tied to the throne in Gina and Stefano’s lair. He tells Marlena that Stefano killed John, and Gina tells John that Stefano killed Marlena when she refused to cooperate with him and called him something that apparently made him even madder than Anna DiMera (Leann Hunley) did when she called him pathetic!

Days Of Our Lives For Spoilers For February 3 to February 7: Ciara, Clyde And Will Try To Help Ben https://t.co/OCKowctd81 pic.twitter.com/gWxDEBcLP5

Phase One in Princess Gina’s plan is to convince John he needs her – and make herself fully available to him, even though she will have to pretend to be that boring Hope Brady for a while. Photo stills show Gina, still in her Hope Brady garb, pressing herself against John and the couple kissing deeply while he sits on the floor against a crate, so they are obviously still in the warehouse in Prague when this takes place!

The comfort and consolation is only a stepping stone to passion and possession as far as Princess Gina is concerned, and the more bonded they become, the closer they come to the brainwashing that will be part of both John and Marlena’s “training” to be transformed into Princess Gina’s “pawn” and Stefano’s “dark queen”, where they both will be under complete control by Gina and Stefano!

Hope still has that control chip in her brain that Stefano once controlled her by satellite with through his wristwatch, and who knows how Steve has been transformed into Stefano, and exactly what his “essence” consists of!