Days of Our Lives Spoilers: Nicole Comes Clean To Eric – Admits To Faking Romance With Brady 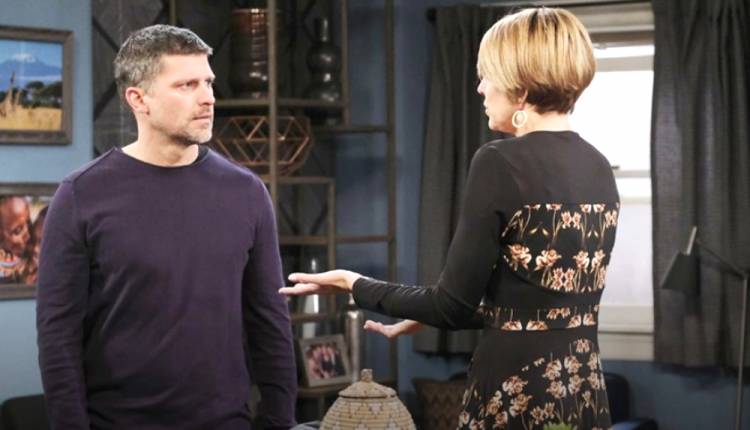 Days of Our Lives spoilers tease that Nicole Walker (Arianne Zucker) will come clean to Eric Brady (Greg Vaughan) about her fake relationship with Brady Black (Eric Martsolf) in an upcoming episode of Days of Our Lives!

As Days of Our Lives viewers will recall, Nicole and Brady were pretending to be involved to dissuade Kristen DiMera (Stacy Haiduk) from trying to get her hooks into Brady again. It was Kristen who told Eric that Nicole and Brady were involved, and Nicole decided it was high time that she comes clean to Eric about this matter, since it just isn’t fair to him to think she was involved with his romantic rival! His younger stepbrother, yes, but still his rival! Nicole, Brady, and Eric have quite a few years of “triangle” under their belts!

DOOL Spoilers – Nicole Walker And Eric Brady At Least Have Come To The Point Of Civility But It’s Been A Tough Row To Hoe!

After several months, Nicole and Eric at least have come to the point of civility, but it’s been a rough row to hoe! Eric just hadn’t been able to forgive Nicole for keeping his paternity of Mickey Horton (the May twins) from him, even though she had promised Sarah Horton (Linsey Godfrey) that she would never tell Eric.

Sarah didn’t want Eric to know he was her baby’s father, and that was because she knew that Eric would leave Nicole for her – but when he found out the secret, he left her anyway, although he didn’t exactly immediately gravitate to Sarah – just their baby!

He tried to drive Xander Kiriakis (Paul Telfer) away, but Sarah was dead set against it. She always let Xander see Mickey on the sneak! Nicole shared with Brady that Eric had let her babysit little Mickey and that she thought that was a good sign that maybe he was ready to try and talk things out with her after being separated and broken up for several months.

Days of Our Lives Spoilers – Nicole Walker Isn’t Sure It Is The Right Time, With Mickey Horton Not Having A Donor Match But She Figures It’s Now Or Never

Days of Our Lives viewers will recall that Nicole and Brady had been discussing coming clean to Eric in Friday’s episode when Xander interrupted; which was when they got the terrible news that Eric and Sarah weren’t donors matches for baby Mickey. Nicole still isn’t sure it’s the right time but she decides it’s now or never – so she contacts

Eric to let him know she needs to talk to him about something important, very important. She doesn’t want any lies or misunderstandings between them, and she tells Eric that she and Brady are not really involved, let alone sleeping together – and that it was only a ruse to try to keep Kristen away from Brady, although it obviously didn’t work! Brady and Kristen re-bonded over grieving together for their baby, Rachel Isabella who had died and they had visited her grave together. Eric is finally able to forgive Nicole!